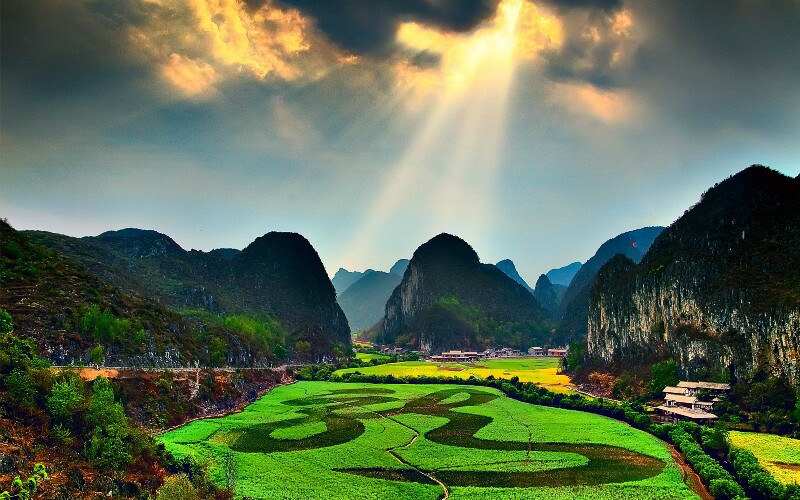 Anshun Travel Guide - How to Plan a Trip to Anshun

Anshun, located in the middle of Guizhou Province and the eastern part of the Yunnan-Guizhou Plateau, is a popular tourist destination in western Guizhou. At an altitude of 1,300 meters, Anshun has a total population of 2,523,000 and an area of 9,264 sq. km. Once an important centre for tea trading, it remains the commercial hub of western Guizhou.

As an ethnic minority area, Anshun has preserved its unique folklore. Stone Village (Shitou Zhai) is a Buyi village where all the architecture is made of stone: stone houses, stone walls, flagstone roofs, flagstone roads, stone bridges and stone banks. It is said to be the birthplace of wax painting. The exuberant traditional festivals and customs of the Buyi people are a feast for the eyes.

Besides, Anshun is an ideal place for exploring ancient Han culture. Tianlong Tunpu (Village Fortress), built during the reign of Emperor Zhu Yuanzhang of the Ming Dynasty (1368–1644 AD), is highly valued by experts as a living fossil of Han culture and as the last Ming Dynasty village in the world. Some of the villagers still live in forts and follow a simple and peculiar army lifestyle, retaining traditional Ming clothing and hair styles. They are called Tunpu people. Dixi Drama is an exclusive ritual dance of Tunpu people, involving elements of drama, sacrifice and entertainment. It is performed during Chinese New Year, at festivals and celebrations, and in the months after harvest.

Broiled Mini Xiang Pig is also called Qian Gui Mini Xiang Pig. It is a kind of pig exclusively produced in Guizhou (called Qian for short) and Guangxi (called Gui for short). As they are raised all year round in mountainous areas, with high altitudes and low temperatures, Mini Xiang Pigs grow short and small, with a maximum weight of five kilograms. They feature small bones, thin skin and delicate and springy meat. Miao people broil the meat with special seasoning, which makes it especially tasty.

Buckwheat Cool Bean Jelly is a favorite snack of Anshun people, especially young people. It is made from the powder of sweet buckwheat planted on the Yunnan-Guizhou Plateau, seasoned with preserved spicy bean curd, chili oil, fried soy beans and pignuts. It tastes hot and spicy. Sometimes, to enhance the appetite, Anshun people like to add fragrant vinegar.

Genuine Anshun food can usually be found at local night markets. These are mainly concentrated around the junction of Dongjie Street and Guofu Street. Besides, there are many snack stalls serving local food on Tashan Road. Many distinctive restaurants with sightseeing pavilions can be found in the Huangguoshu Waterfall Scenic Area, where tourists can admire the beautiful scenery while dining.

1. Best time to go: July or August. Anshun is cooler in summer than many other places in China. This is the rainy season there and the volume of water at Huangguoshu, one of Anshun's most famous scenic spots, is massive, making the waterfall a spectacular sight.

2. Buses are available from Anshun city to Huangguoshu or the Dragon Palace.

3. When visiting Huangguoshu, tourists should bring umbrellas or raincoats. Otherwise they may be totally drenched. Alternatively they can buy umbrellas at the waterfall for about 15 yuan.

5. There is a 300-meter-tall escalator at Huangguoshu, the tallest in Asia. The price is 50 yuan per person.

Internet bars can be found on Minzhu Road. They usually cost 2 RMB per hour. There are also many bars on other roads, but they are harder to find.