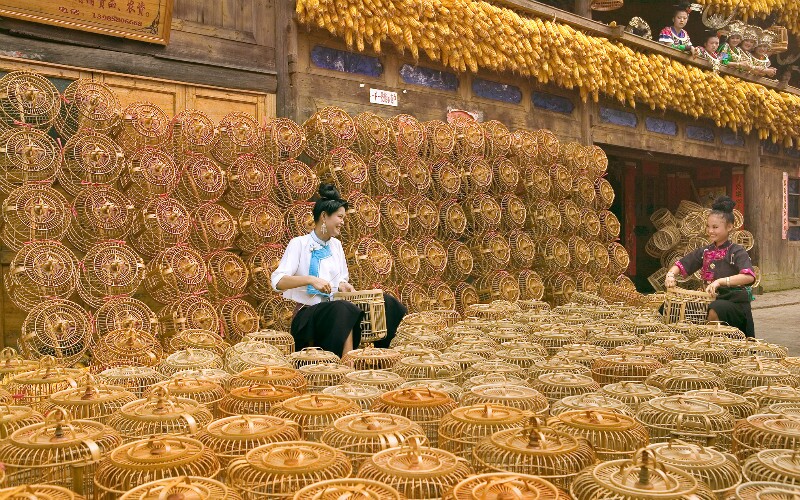 The tunpu (village fortress) in Anshun, Guizhou, was built during the Ming Dynasty (600 years ago) for military use. During the early period of the Ming Dynasty, Emperor Zhu Yuanzhang sent Han national troops from the middle and lower reaches of the Changjiang (Yangtze) River to Anshun. The garrison forces were ancestors of the inhabitants of the "Tunpu," who built stone-structured villages and turned the neighborhood into farmland for growing crops. In those days, soldiers spent most of their days working as farmers. Only in times of war were they called to unify and repel an enemy. Today, the area retains its original style and pace of life.

Tianlong Tunpu is one such village fortress. It is located in Pingba County of Anshun, 72 kilometers from the capital city of Guizhou Province in Guiyang, which is reachable from downtown Anshun in twenty-minutes. Tianlong Tunpu occupies a strategic position, guarding what was once an important passage to Yunnan Province. Therefore, Emperor Zhu Yuanzhang of the Ming Dynasty placed much importance on this village and sent large numbers of troops to garrison it.

The name "Tianlong" comes from a combination of the names of two mountain ranges, Tiantai Mountain and Longyang Mountain, that surround the village. Despite the changing dynasties and the passage of hundreds of years, residents of Tianlong Tunpu still live in forts and maintain a simple, peculiar army style of living. They retain their traditional Ming lifestyle, clothing and hairstyle, and are a distinct branch of the Han Ethnic people called the Tunpu.

Although the area where this village is located is new to foreign travelers, it is worth a visit. Let's tailor make a tour for you to visit this area.