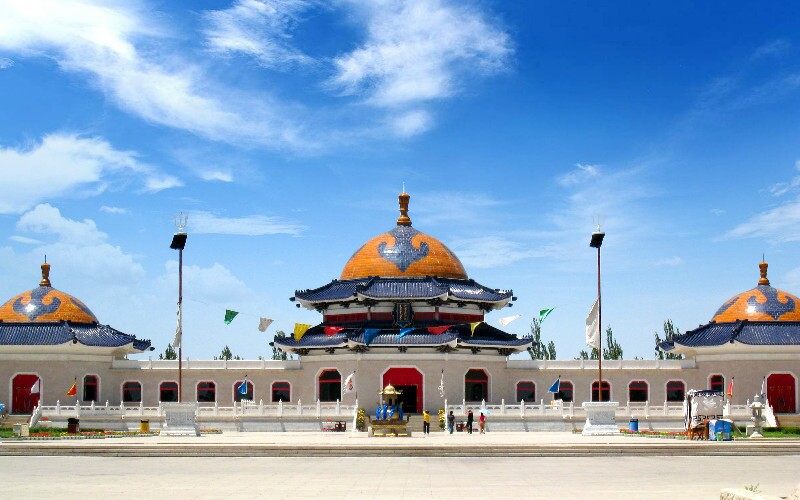 The Mausoleum of Genghis Khan

Genghis Khan (AD1162–1227 ) is a legendary hero, the founder of Mongol Empire. He united nomadic tribes in Mongolian Plateau, laid foundation for the unification of China, and then continued his conquest westward to establish Mongol Empire, the largest contiguous empire in world history. The establishment of the empire enhanced trade, cultural exchanges, interracial mingling between the East and the West, and had great significance in history of China as well as the world.

The Mausoleum of Genghis Khan is located in Erdos City, 185 km (115 miles) south of Baotou City. However, the Mausoleum actually is not the real burial place of Genghis Khan, but rather, a cenotaph. According to Khan's will, he was buried without any markings. The real burial place still remains a mystery to this day. In 1954, the Mausoleum was built by the Chinese Government in traditional Mongolian style. It serves as a sacred gathering place for people to commemorate and offer sacrifice to their hero.

The Mausoleum covers an area of fifty thousand square kilometers (19305 square miles). The main structure is three palaces, shaped like Mongolian yurts, and corridors that link the palaces. The whole construction is magnificent with strong Mongolian ethnic style.

The main palace in the middle of the three is 26 meters tall, with a 5-meter tall marble statue of armor-clad Genghis Khan. Behind him is a map of the vast territory of Mongol Empire which shows his glorious feat. Beside him put the saddles, weapons, carts, iron pans and other relics of that time. Coffins of his three wives are also laid in the main palace. Corridor frescos depict the significant events of Genghis Khan's life and the establishment of Yuan Dynasty (1271–1368 AD) by his grandson Kublai Khan.

In the East Palace laid the coffins of Genghis Khan's fourth son Tolui (Kublai Khan's father) and Tolui's wife. Tolui has very eminent status because many of the ancient Mongolian kings were his descendants. In the West Palace are nine banners and Su Le Ding (iron spearheads). The nine banners represent the nine trusted generals that have followed Genghis Khan in his conquests. The iron spearheads were placed on the flag which Genghis Khan used to command his army in the wars. After he died, the legend said that his soul went into the spearheads. Therefore, the Su Le Ding is very sacred among Mongolian people.

Every year there are four gatherings here at the Mausoleum to commemorate Genghis Khan, among them the spring gathering (March 12 on lunar calendar) is the most important and the grandest. Mongolian people, far and near, will come to the ceremony, wearing their traditional costumes, and burn incense, offer Hada, fine wine, food, dairy products, and other sacrifices in front of Genghis Khan's statue.