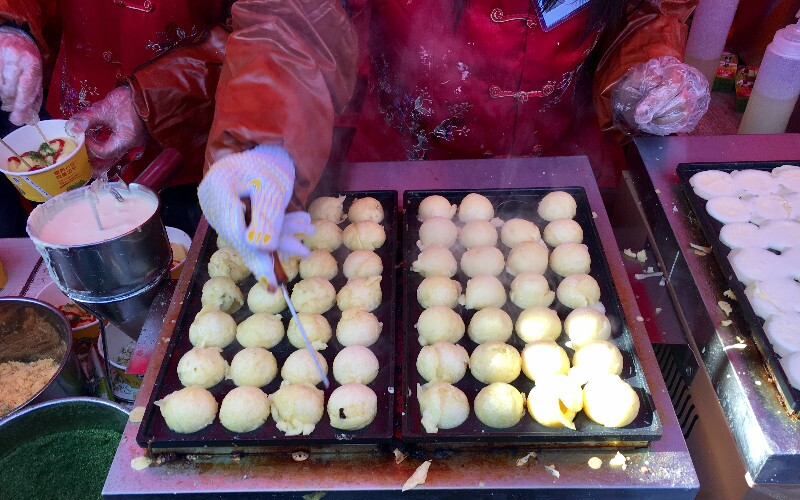 Beijingers traditionally have a Chinese New Year's Eve meal and perform temple ceremonies as well as specific traditions, but nowdays they also celebrate at the Great Wall, bars, and at special modern entertainment festivals.

In 2021, the Chinese New Year runs from February 11 through to February 17, with most people returning to work on February 18 or 19. It is the year of the dog, which means you will be seeing a lot of dogs depicted around if you do decide to visit.

This article gives you some insight into what Beijingers do for the festival, travel information, and places you can celebrate Chinese New Year in Beijing. Traditionally, it is the one time a year when everyone goes home to see their family.

Most Beijing residents will try to be home on Chinese New Year's Eve. They especially want to make the traditional New Year's Eve family dinner. If you have Chinese friends (or family) you might be lucky enough to be invited to a reunion dinner.

On that day, people clean the house and don their finest outfits in the spirit of the New Year. People put up red decorations and even red clothes. The red decorations symbolize wishes for good fortune, prosperity, and well being in the coming year. Red clothes not only signify power, happiness, and vitality, it also is said to scare away the ghosts.

People often paste red couplets that are slogans or poems and pictures of door gods (to guard their doors from evil spirits), and they hang red lanterns in their houses. In North China, it is also customary to paste paper cuts in the shapes of animals and plants on windows. Each kind of animal or plant signifies a special wish.

On the evening of New Year's Eve, families tune in to watch the Spring Festival Gala on CCTV. With over 700 million viewers yearly, it boasts the largest audience of any TV show in the world. The best musicians, dancers, and acrobats perform on stage.

After the dinner feast, people go out to play with fireworks and watch the fireworks display over the capital that is unmatched by any western celebration. It's amazing to watch, so make sure you get up high to watch.

The noise is thought to scare away evil spirits, which explains why the fireworks in China are preferred to be loud rather than beautiful like the fireworks common in the west. You'll probably experience no other fireworks display like it on earth!

After the fireworks, it is traditional in Beijing and other northern cities to eat dumplings, called jiaozi, to signify prosperity.

Meanwhile, both young and old continue to set off their fireworks and light rockets. These will continue to explode over the buildings for the 15 days of the Spring Festival (so be careful if you happen to be walking around on the street!). People also go out to the temple fairs. They are places to go to taste the local flavor in the way of food, art, music, games, and people.

Many people go to a local temple's temple fair during the Spring Festival. Temple fairs refer to gatherings near temples, where activities such as ritual praying, entertainment and shopping take place.

The History of Beijing Temple Fairs

Souvenirs at a Beijing temple fair

Temple fairs in Beijing have a long history, and the origin can be traced back to the Liao Dynasty (907 – 1125). The fairs are held at various ancient temples during festivals, so they are called "temple fairs." Read on for more information on which Temple Fairs to attend.

Characterized by folk culture activities such as folk skills, collections and flower shows, the temple fairs reproduce the traditional customs of Beijing. Many Beijingers worship a local deity or their ancestors and also enjoy the entertainment, including many kinds of Chinese folk art (music, dance, theater, acrobatics, art, crafts, etc.).

For foreigners, visiting a temple fair is definitely a cultural experience. You may enjoy the reenactment of the ceremony of worship to Earth and Heaven. Folk performances like dragon dances and lion dances, the demonstration of traditional arts and crafts, and fun games are all part and parcel of temple fairs. You can also taste numerous Chinese New Year foods such as snacks, gourmet court dishes and delicacies.

We have lots more for you to read about Beijing's Temple Fairs.

Beijing people do more than celebrate at temple fairs, there are also athletic competitions and winter fairs. (The dates of the events in 2021 are not be published. We will update them when they are given. )

The Longtan fair is one of the most popular of its kind in Beijing. It is mainly a sporting event with crowd participation. It doesn't take place in or around a temple. It is held in a park.

There are athletic competitions and demonstrations to both watch and take part in. Martial arts champions demonstrate their skills, and crowd members are encouraged to take part in various competitions such as table tennis, diabolo (Chinese Yoyo) spinning, arm-wrestling, chess, and rock-climbing. Snacks abound.

Dance routines, ice football, operas, and other events will recreate the feel of the late Qing Dynasty (1644–1911). In the 1800s, the old Summer Palace was a particularly busy Spring Festival venue.

This fair puts an international spin on things with flavors from around the world. Go to see international bands, dance troupes, customs, cuisine, and more. This festival is particularly popular with the Western crowd, as there is sure to be a reminder of home.

The Longqing Gorge Ice and Snow Festival is about 50 miles outside central Beijing.  There are ice sculptures like those in Harbin.

It’s a great day/overnight trip, especially if you can’t make it out to Harbin Ice and Snow World.

Celebrate at the Local Bars

For the true Chunjie experience, visit Houhai Lake, in the center of the city. While other nightlife areas have been built up and modernized, Houhai has kept its traditional charm and beauty. Stop into one of the plethoras of bars along the lake and celebrate in local style.

For a truly spectacular view of the fireworks that will be lighting up the Beijing sky on the eve of Chinese New Year (11th February) visit Atmosphere Bar on the 80th floor of the China World Summit Wing which looks out over most of the iconic Beijing buildings (i.e. the CCTV headquarters). Reservations are recommended for this night.

You may be able to skate on Houhai ('Back Lake'), near Sanlitun.

The most famous bar district is packed full of parties and deals for New Year's Eve. This writer recommends visiting The Local, located just off Sanlitun South Street. Janes and Hooch as well as Great Leap Brewing are also popular bars in the neighborhood, the first one serving up cocktails, the second one specializing in craft beer.

Why not celebrate atop China's own world wonder? The Brickyard, at the Mutianyu section of the Great Wall, offers the total package throughout the year, with. Book one of their luxury rooms for the night, and leave the rest to them. This is also likely to be one of the quieter options for Chinese New Year.

You can hike the wall during the day and then warm up with a traditional hotpot dinner, which is said to bring good luck. They also have a dumpling-making workshop preceding a massive fireworks show (on top of the great wall, of course) which you'll get to eat after.

You may get the Great Wall to yourself at Chinese New Year.

We can tailor your trip to your requirements, all you have to do is let us know when you're coming, and what you want to do. This way, we can schedule in some of these Chinese New Year activities.