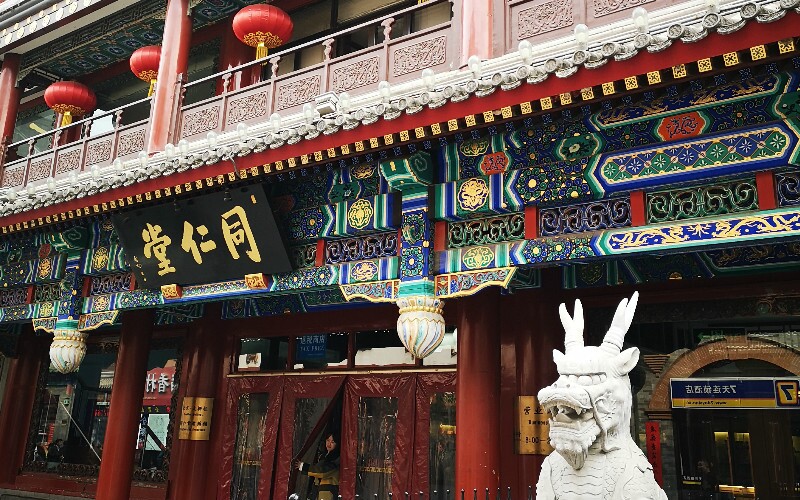 Starting from Qianmen Street in the east and ending at Meishi Street (煤市街) in the west, Da Shi Lan Commercial Street is a busy street with its own unique features, being the oldest and the most famous one in Beijing.

Da Shi Lan has a history of nearly 500 years. As a busy downtown area, it was built in the Ming Dynasty and developed in the Yuan Dynasty. It has been prosperous since the Qing Dynasty; therefore the buildings there retain the characteristics of the old architectures from the Ming and Qing dynasties, such as red windows and gray tiles.

Origin of the Name

Today's Da Shi Lan Commercial Street goes back to the Xiaozong Emperor's period of the Ming Dynasty (1448 AD). At that time, Beijing was placed under curfew and a number of wooden fences were built on the streets to prevent thieves.

Among them, one street was known for its excellent wooden fences in size and design. It remained as time passed and the "big wooden fence" represented the street which was gradually accepted by the public. The 'big wooden fence' means 'Da Shi Lan' in Chinese.

Once a recreation center, there were five opera theaters there, and the earliest movie theater in Beijing's history was also set there.

Da Shi Lan is located in the center of Beijing. Walking towards the north for 100 meters, you will reach Tian'anmen Square. There are many other famous scenic spots that you can go to on foot. It is also convenient to go to other scenic spots because there are many subway stations and bus stations there.

The scenic spots around Da Shi Lan are: Tian'anmen Rostrum, the Monument to the People's Heroes, the Great Hall of the People, the National Museum of China, the Chairman Mao Zedong Memorial Hall, Zhengyangmen Gatehouse, the Palace Museum, Jingshan Park, Beihai Park and Houhai Bar Street.

At 6.45 pm, yangko dancing and walking on stilts are shown in front of Liulaogen Theater. Sometimes, you can meet some actors or actresses who you often see on TV. Its address is 34-36, Xiaojiang Lane, Qianmen East Road, Dongcheng District, Beijing.

Leo Courtyard lies on the northern side of Shaanxi Lane which is one of the old Beijing's Eight Lanes. On the blue-gray front wall, its original name of Shang Lin Xian Guan (上林仙馆) is inscribed. The building was built in the late Ming Dynasty and the early Qing Dynasty, with a history of more than 300 years.

The two-storied hotel, built in a wood-brick construction, is a well-preserved siheyuanwith two courtyards. The carved railings, painted corridors, and the court-style lights will remind you of the busy and prosperous lifestyle of the past. The hotel is famous for the two women who lived there.

In the late Qing Dynasty, the building was used as a brothel building because a popular courtesan, Sai Jinhua (meaning more beautiful than golden flowers/赛金花), established the Golden Flower Group (金花班) there. At the beginning of the Republic of China, another brothel group, Yun Ji, stayed in the building, and the brothel was famous for a courtesan called Xiao Fengxian (小凤仙).

Xiao Fengxian was well-known because she helped General Cai E (蔡锷) escape from the house arrest which had been approved by Yuan Shikai, President of the Chinese Republic. Both courtesans, Sai Jinhua (赛金花) and Xiao Fengxian (小凤仙), are considered as legendary women due to the amount of stories of what happened in their lives.

Now, Leo Courtyard is popular with foreign backpackers. The manager there is a British man who has been working there for ten years. He knows many stories which happened in the building very well and will tell you which room Xiao Fengxian (小凤仙) lived in. Moreover, it is currently free to visit.

Old House Coffee Shop 1918 is in the old-Shanghai-style design, which is particularly embodied by those old-styled cloth sofas. Dimly lit with celebrities' pictures on the walls, a warm fireplace, an old-fashioned gramophone, a black and white television, and outdated movie posters, it brings the old lifestyle back to guests. Wi-Fi is also available there.

Located on the southern side of Tian'anmen Square, at the north-eastern side of Xuanwu District, Da Shi Lan is an old street which has different types of interesting and time-honored shops scattered along it, such as Beijing Silk (北京丝绸商店), Rufuxiang Silk (瑞蚨祥绸布店), Neiliansheng Chinese Shoes (内联升鞋店), and the Chinese medicine shop, Tongrentang (同仁堂).

Liulichang Cultural Street is well worth visiting. You can buy antiques: the four treasures of studying (a writing brush, an ink stick, an ink slab and paper), rubbings from stone tablet inscriptions throughout the ages, metals, stones, ceramics and jewelries. If you are lucky and have a discriminating taste, you will find something valuable.

At the commercial street, there are lots of old-Beijing-styled restaurants, Quanjude, Pianyifang and other snack shops and restaurants.

Old-Beijing-Styled Noodles with Bean Paste Restaurant is on Qianmen Street. The old-Beijing-styled culture and lifestyle are fully represented by wooden chairs and tables, exquisite little adornments, and other settings.

Goubuli has a history of more than 100 years and is known to all as a kind of stuffed bun. And now, it's also known as Go Believe. Goubuli Restaurant at Qianmen Street is directly managed by the Tianjin Goubuli Company.

Goubuli stuffed buns in the restaurant are made from selected ingredients. The pork is supplied by the company's pig farms, the shrimps are bought from Zhengjiang, and the flour is imported from Canada and Australia. All of these elements guarantee their taste, and thus are praised by guests.

Based on a traditional skill, Goubuli buns stuffed with pork are made in a scientific way: the ratio of lean meat to fatty meat is seven to three, which makes the soup strong and fragrant and the buns taste nice.

This type of bun is also well made. With a good proportion of shrimps, sea cucumber and pork, the buns taste fresh and good.