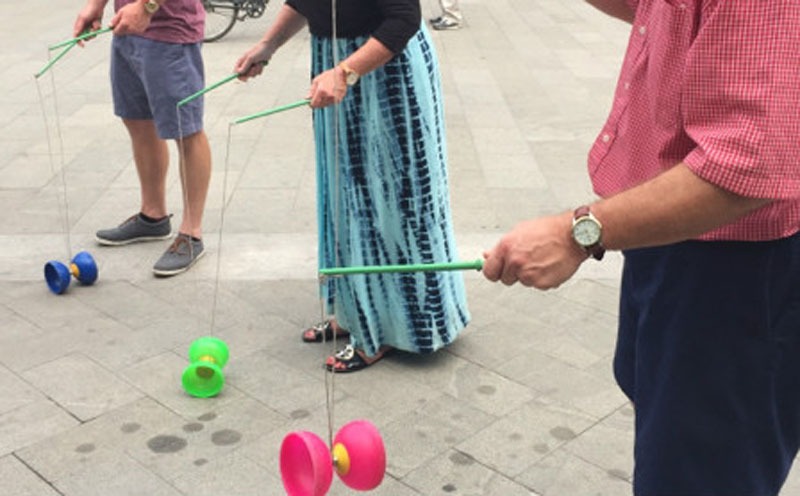 What Is a Diabolo?

A diabolo, or Chinese Yoyo, formerly also known as "the devil on two sticks", is a juggling folk toy made of bamboo and wood. It is an empty roller shaped like a dumbbell, which is spun and tossed on a string tied to two sticks, held one in each hand.

Several diabolos can be spun on a single string at one time, and varieties of tricks are possible in using the sticks and strings. Diabolo spinning is closely related to the daily exercise, entertainment and festive celebrations of old Beijing. Diabolo spinning has been named as one of China’s non-material heritages.

Traditional diabolos are usually hand-made, and the complicated process goes through about 17 procedures. Beijing Diabolo Museum displays how a diabolo is made. Contact us to design a tour including the museum.

Beijing Diabolo Museum (北京空竹博物馆) is located in a traditional courtyard house in the hutong . Housing over 400 diabolos, the museum is divided into 3 halls, presenting the development of diabolos in terms of history, techniques and playing tricks.

Visitors can watch the making process of a diabolo at the interactive area, or even have a chance to make a diabolo together with a diabolo master. At the small square outside the courtyard, diabolo spinning fan s and masters gather occasionally to teach the tricks of diabolo spinning.

Some notable exhibits include diabolos that are over 100 years old, the biggest diabolo in the world, mini diabolos that are only the size of a fingernail, a diabolo once spun by Puyi (1906 - 1967), the last imperial emperor of China, and clay sculptures of diabolo spinning in ancient times.