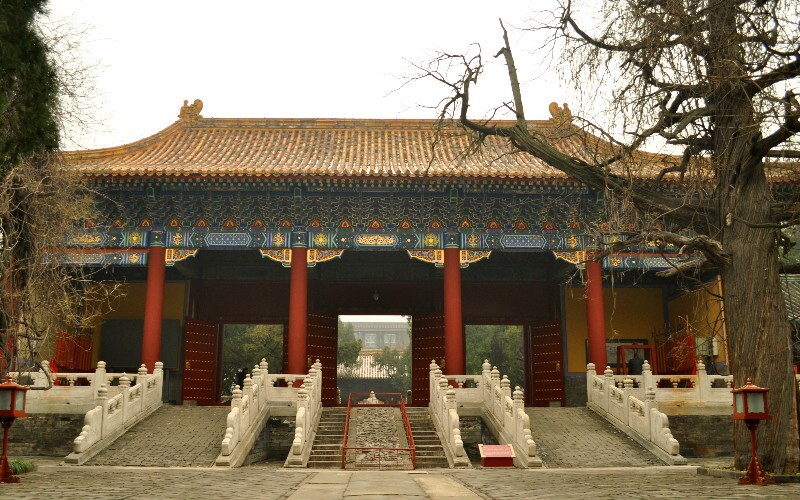 Beijing Imperial Academy (also named Beijing Guozijian, Beijing Imperial College) was first built in 1306, and it was the highest administrative organ to the educational management as well as the top one seat of learning during the Yuan (1271–1368), the Ming (1368–1644) and the Qing (1644–1911) Dynasties.

The memorial archway in Beijing Imperial Academy is the only memorial archway built for education in China. The banners of the both sides are inscribed by emperor, symbolizing that the country pays a lot of attention on education. Piyong Hall is the main architecture in the imperial academy. It was built in 1784, and is the place for emperors in the Qing Dynasty giving lectures. Located in the very central of the imperial academy, Piyong Hall has large doors in all directions, multiple eaves, pyramidal roof, and quadrate shape. Piyong Hall is surrounded by gallery, and four delicate bridges stretching over the pool lead visitors to the hall. Yilun Hall is located to the north of Piyong Hall. In the Yuan Dynasty, it has another name Chongwen Pavilion, and got the name of Yilun Hall after the reconstruction between 1403 and 1424 in the Ming Dynasty. Before Piyong Hall was built, it was the hall for emperors giving lectures and after that, it was used as a store house for books.

How to get there: Visitors can take buses 13, 116 and 807 to get there and get off at Guozijian Station. Besides, visitors also can take subway 2 and subway 5, get off at Yonghegong Station, then get out of the station from Exit C (Southwest Exit), and the imperial academy is 200 meters ( away to the south.

Best time to visit: Period from October to April in next year.