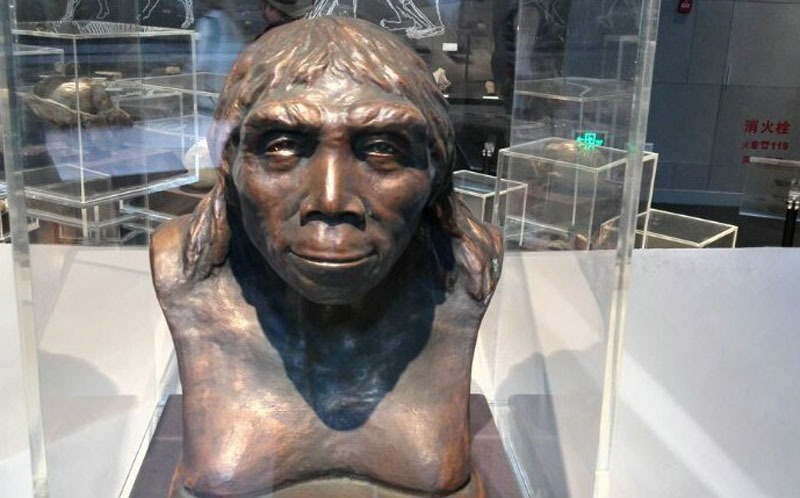 Peking Man Museum, or Zhoukoudian Anthropological Museum, is situated in the village of Zhoukoudian (Choukoutien in Pinyin Chinese, "Zhoukoudian" being to "Choukoutien" as "Peking" is to "Beijing") near Beijing, where the 1921 discovery of Peking Man (Sinanthropus pekinensis), based on the surface find of a molar, created a sensation when it was first discovered, since it was not only the first example of a prehistoric humanoid found in China, but the first such find in all of Asia. Peking Man was believed to be an example of a "missing link" between ape and man, the notion of a missing link belonging more to the imagination of lay folk than to the scholarly world of science. Further pieces of the Peking Man "puzzle" were found during initial site excavations that were conducted between 1923-1927.

Peking Man is now considered to belong to the broader genus called Homo erectus ("erect humanoid"), making Peking Man a Homo erectus pekinensis. Peking Man shared this missing-link role with two other specimens: Java Man, found in 1891 on the island of East Java in Indonesia, another Homo erectus with the more specific name of Pithecanthropus erectus ("upright ape-man"), erectus being the genus proper; and Taung Child (Australopithecus africanus), found in 1924 at Taung near the city of Kimberley, in South Africa.

Whereas the scientific community was somewhat skeptical of the Java Man finds and their documentation, it unreservedly accepted the scientific value of the Peking Man finds, especially since the excavations during 1923-1927 unearthed more evidence, including more teeth, a lower jaw, and skull fragments. Moreover, during a second set of excavations that took place under the supervision of the Chinese paleontologist, Yang Zhongjian (aka Dr. C.C. Young in Anglo-Saxon circles, and generally renowned as the 'Father of Chinese Vertebrate Paleontology'), and which took place from 1928 until they were abruptly interrupted by invading Japanese forces in 1937, over 200 human fossils from more than 40 individual specimens, including 6 near-complete calottes, or skullcaps, were excavated from the site.

Besides the finds of humanoid fossils, the scientists excavated a number of artifacts belonging to humanoid habitation such as primitive, hand-held tools - or tools lacking handles - such as stone flakes (for cutting) and stone chopping tools, where the latter is to be understood as a special stone (in the Zhoukoudian area, either quartz or green sandstone) that has had clumps, or flakes, removed from both sides of one end of the stone by means of striking the stone at an angle with another similarly hard stone, the result being a primitive tool, with a simple cutting edge, that can be gripped in one hand. Another indicator of humanoid habitation at Zhoukoudian was the presence of layers of cinders that included the remains of charred animal bones, suggesting that animal meat had been cooked here over open fire.