The following hot air ruotes for internal flights to & from Beijing are for your reference only. You can find more Beijing domestic flight routes, compare flight price & time by searching the schedule form above.

Beijing, the capital of China, is the cultural, political, and economic center of China. Beijing is well connected with the world and every part of China through flights to and from the city.

Beijing Capital International Airport (PEK) is the largest and busiest airport in China, and one of the largest in the world. It operates domestic flights to most cities of China, such as Shanghai, Guangzhou, Xi’an, Shenzhen, Xiamen, Chengdu, Hangzhou and Guilin. You can search a real-time schedule of Beijing flights with the search engine below.

The Airport Express Subway links Beijing Capital International Airport with the city center of Beijing. It has four stops: T3, T2, Sanyanqiao, and Dongzhimen. The whole trip is only 20 minutes, and the ticket fee is 25 CNY.

If you take an airport taxi, the cost is at least 100 CNY. Many taxi drivers can’t speak any English. It is suggested that you print the Chinese address of your destination on a piece of paper.

Hotel shuttle buses are available for most major hotels in Beijing. You can call your hotel in advance to confirm the information.

China Highlights also provides an airport transfer service, with private van/car and an English-speaking guide, from only $26.

To Cities Around Beijing

There are long-distance buses from the airport to cities around Beijing, including Tianjin, Langfang, Qinhuangdao, and Baoding.

How to Get Around in Beijing

Beijing is the cultural, political, and economic center of China. It has comprehensive and developed public transportation system. You can buy a Beijing transportation smart card (a prepaid IC card), which can be used when you take public buses, the subway, and some taxis (taxis with the notice ‘Welcome to Use IC Card’). You can get a 60% discount when you take public buses using an IC card. See a Beijing Subway Map

Things to do in Beijing

Beijing, the capital city of China, combines ancient culture and modern development. It is one of the Four Ancient Capitals of China, with more than 3,000 years of history, serving as the capital of ancient China for almost 900 years.

Savoring the less crowded sections of The Great Wall or visiting the most popular sections of the Great Wall and the Ming Tombs is must-do. Strolling around the Hutongs lets you experience Beijing locals’ traditional family life. The massive and luxuriant imperial Forbidden City should never be missed. Other must-sees include: the Temple of Heaven, the Bird's Nest, souvenir markets, such as Panjiayuan Antique Market and the Beijing Opera.

Where to stay in Beijing

Q: I am going to fly to Hangzhou, in which terminal of Beijing Capital International Airport do I have to make my check-in? By the way, it is Air china. Thanks in advance.

All flights of Air China depart from Terminal 3 at Beijing Capital International Airport. You can see information about the airport at (https://www.chinahighlights.com/china-flights/china-airport/beijing-capital-airport.htm). 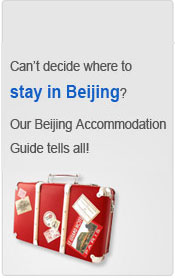