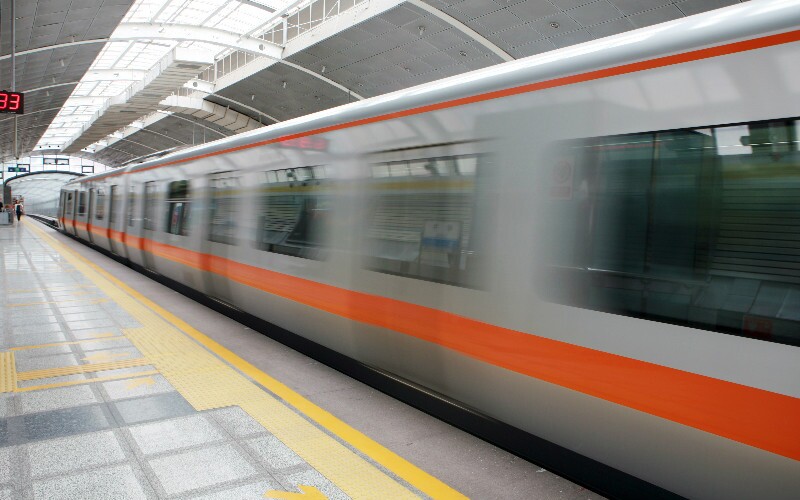 Beijing Subway Line 4 runs through Haidian, Xicheng, Fengtai, and Daxing districts, and is linked with Subway Line 1, 2, 10, and 13.

Beijing Metro Line 4, officially opened for transportation use on September 28, 2009, is a south-north rail line that runs through Beijing's urban district, with an overall length of 29 kilometers and 24 stations. The entire journey time is about 47 minutes, and the minimum headway is 3 minutes.

With Gongyixiqiao Station (公益西桥站) of the South Fourth Ring Road in Fengtai District as the origin station (安河桥北站), it is routed through Xuanwu District, Xicheng District, and finally ends at Anheqiao North Station in Haidian District.

This line connects Beijing South Railway Station, Xidan, Beijing Zoo, Zhongguancun, and other important transportation hubs and business districts. It is one of the main south-north traffic arterials in Beijing.

Attractions and Places of Interest along Beijing Metro Line 4

The historical Yuanmingyuan was composed of Yuanmingyuan, Changchunyuan and Qichunyuan (renamed as Wanchunyuan when it was rebuilt by the Emperor Tongzhi). The three gardens were collectively referred to as Yuanmingyuan, covering an area of 3,460,000 square meters.

It was a huge royal palace which was built, rebuilt and operated during a period of more than 150 years by emperors of the Qing Dynasty. Emperors Yongzheng, Qianlong, Jiaqing, Daoguang and Xianfeng lived there for a long time.

While enjoying fun and pleasure, they also held morning meetings and handled government affairs there. It was specially called the "Royal Garden".

Yuanmingyuan was brutally looted and burned by Anglo-French forces in October, 1860. After that, it went through war and other historical changes. The remnants of some of the landscape and architecture were also completely destroyed. Yuanmingyuan was eventually reduced to ruins.

The Summer Palace lies north-west of Beijing City, between the fourth and the fifth ring roads, about 10 kilometers from the city center. It is the largest and the best preserved museum-style royal garden currently existing in China. It is also a world-renowned tourist destination.

This palace is a large natural landscape garden which was mainly built around Kunming Lake and Longevity Hill, through imitating Hangzhou West Lake scenery and taking in some design techniques and artistic conceptions from the Jiangnan Gardens. It is also the best protected royal palace, known as the Royal Garden Museum.

This scenic spot is vast, with the Pavilion of the Buddhist Incense at the center of the buildings, which includes more than 100 scenic buildings, over 20 courtyards, 3,555 historic buildings, more than 3,000 pavilions, towers, corridors and other different architecture, covering an area of over 70,000 square meters.

There are also more than 1,600 old and famous trees. Among the buildings, the Pavilion of the Buddhist Incense, the Long Corridor, the Marble Boat, Suzhou Street, the Garden of Harmonious Interests and the Big Stage have become the household representative buildings.

Beijing Zoo is situated outside of Xizhimen in Xicheng District, occupying an area of about 86 hectares, 8.6 hectares of which are covered by water. It is China's largest and earliest opened zoo which accommodates the most animals in the country.

There are creeks, lakes and marshes, rockeries and devious paths, green woods and flowers, as well as children's amusement parks and animal activity places. Restaurants, kiosks and other service facilities are also provided.

It contains two parts: the old museum and the new one, with an overall construction area of 24,000 square meters. Its main facilities include the optical astronomical hall, the SGI digital universe theater, the 4D science popularization theater, the 3D dynamic theater, the astronomical exhibition hall and the public observatory.

There are also many public service facilities, such as a multimedia astronomical classroom, an astronomical bookstore, astronomical instruments, teaching aids, and food and beverage sales outlets.

Taoranting Park, established in 1952, is in the south of Xuanwu District, close to the South Second Ring Road. It is a historical and cultural tourist attraction that integrates classical architecture and modern garden-building art and highlights the Chinese "pavilion culture".

Its name, Taoranting (Joyful Pavilion), was taken from the phrase "Tao Ran" ("When the chrysanthemums are in bloom and our homebrew is ready, let's enjoy them together") in a poem by the Tang Dynasty poet, Bai Juyi.

As a well-known pavilion in the Qing Dynasty, it is regarded as one of the four famous pavilions in China.

There are many cultural relics and attractions in Taoranting Park. Except for the most famous Joyful Pavilion, there are also many other sights, such as Cibei Nunnery, Cloud Painting Tower, Sai Jinhua Tomb, the European style South Flower Street and the antique-style North Gate scenic spots.

Zizhuyuan Park is one of the relatively traditional scenic spots in Beijing. It is near the West Third Ring Road and is to the west of Beijing Capital Gymnasium, close to the White Stone Bridge in Haidian District, and adjacent to the National Library.

It was named after the "Fuyin Zizhuyuan" (Purple Bamboo Temple in Bliss) in the park, which was built and rebuilt in the Ming and Qing Dynasties. Its area is 473,500 square meters, about one third of which is covered by water, that is, 158,900 square meters.

The Nanchang River and the Shuangzi Canal pass through the park, forming an overall pattern of three lakes, two islets, one dike, one river and one canal (Chang River and Zizhu Canal). This park is a natural garden style and profoundly Jiangnan style park that is dominated by waterscapes and bamboos.