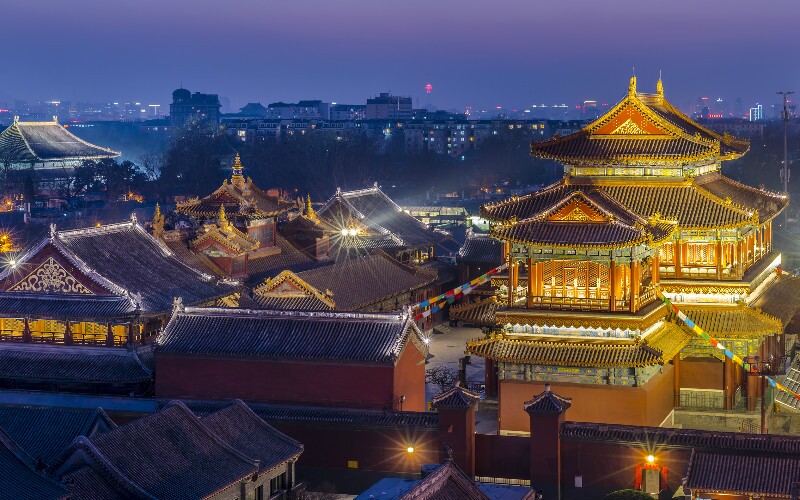 Highlights along Subway Line 5 in Beijing

Located on the east side of Inner Street, Yongding Gate, Dongcheng District, Beijing (北京市东城区永定门内大街东侧), covering an area of 2,775 mu, the Temple of Heaven Park is an architectural complex of ancient Chinese temples, which is the largest in scale and the most delicate in design. It is a precious heritage site of architectural art from around the worldand has been placed on the World Cultural Heritage list. It was first built in the Yongle Period in the 18th year of the Ming Dynasty (1420 AD). The temple wasan imperial sacrificial altar built for ceremonies like worshiping Heaven, praying for rain and praying for a good harvest, used by emperors in the Ming and Qing dynasties.

The park has more than 3,600 ancient pine and cypress trees, most of which were planted in the Ming and Qing dynasties; only a few were planted in the Yuan Dynasty. The large tracts of evergreen trees create a boundless landscape, forming a unique sight of a Chinese garden. The best travel seasons are spring and autumn.

Longtan Park is located on the south-east side of Guangming Bridge, inside the Second Ring Road, in the south-eastern part of Beijing. It was first built in 1952, covering an overall area of 49.2 hectaresincluding a water area of 19.47 hectares. Connected to Dragon Beard Ditch (龙须沟), which looks like the tail of a dragon withthe park asits head, it got the name of Longtan (Dragon Lake Park). There are abundant plants and flowers all over the park, along with bridges and pavilions built in either ancient or modern styles, creating a natural garden landscape. It is a classical northern style park, a combination of an ancient Chinese architectural style and a modern garden art design- a metro garden built in a new pattern, emphasizing the theme of the dragon culture.

Nearby attraction: Park of Ancient City Wall Ruins in the Ming Dynasty (明城墙遗址公园)

The park is in downtown Beijing, beginning from the turret in south-east Beijing, east of Dongbian Gate to the west of Chongwen Gate, covering an area of about 15.5 hectares, among which the ancient city wall ruins and the turret cover3.3 hectares, while 12.2 hectares is covered with greenery.

According to Chinese history, the ancient city wall in the Ming Dynasty is 25 kilometers long, first built in the Yongle Period inthe 17th year (1419 AD), more than 580 years ago.

The ruins remaining now are 1.5 kilometers long, and are an important part of Beijing inner city. It is a symbol of Beijing, the only part of the city wall that is left now. The turret with a corner structure in south-east Beijing is the largest one left; it was first built in the Zhengtong Period in the 1st year of the Ming Dynasty (1436 AD).

The National Art Museum of China is located in Wusi Street, Beijing East District. It is the largest art museum in China, focusing on displaying, collecting and studying modern Chinese artists' works. It covers an area of more than 30,000 square meters, among which the architectural area takes 17,051 square meters, and the exhibition hall takes 6,000 square meters.

The art museum is a modern piece of architecture built in an antique loft style. It is connected by porches and corridors, surrounded by pavilions and lofts, and the roof is decorated by yellow glazed tiles, boasting a distinct ancient national architectural style.

The collected works include 100,000 artworks; most of them are modern fine artworks, famous modern Chinese artists' representative works, major art exhibition prize-winning works and many folk artworks. There are nearly ten categories of collections, such as painting, sculpture, pottery and folk art. Besides, many other Western artworks and foreign works from different countries are also in the collection lists.

The lane is in Beijing East District, one of the 30 beautiful hutongs in Beijingand one of the oldest streets in Beijing, and the best preserved quadrangle dwellings are within the lane.

It is oriented south and northand is 800 meters long, with eightsmall hutongs neatly lined up in both the east and west directions. The lane was built in the Yuan Dynasty; you can see some celebrities'mansions left by the Ming and Qing dynasties. Along the hutong, there are numerous fashionable shops in varied styles, combining old fashionedstyles with a modern style.

Nanluogu Lane is also a bar street. Unlike Sanlitun and Houhai, the bars there are comparatively quiet, harmonious, natural and close to life;although it is located in the downtown area, itis seemingly a world away. Read more on Nanluogu Lane

Back to Beijing Subway