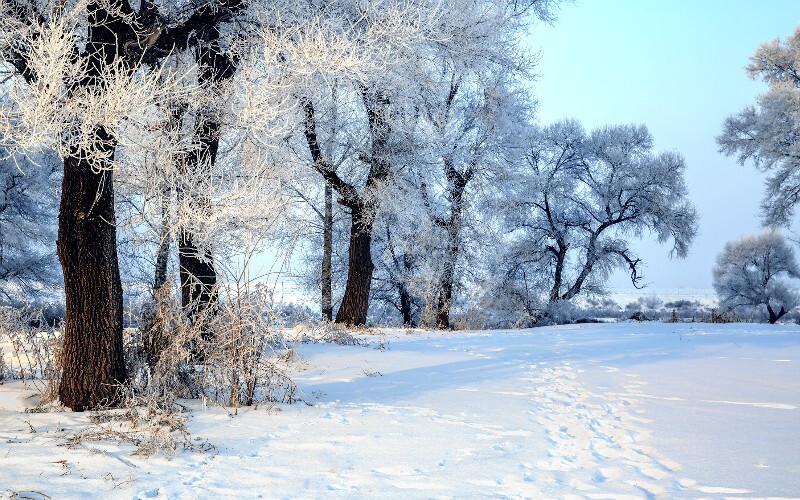 The Rime Scenery of Jilin

Jilin's Rime is one of China's four natural wonders, along with the Yangtze Three Gorges, Guilin's Karst and Rivers, and the Stone Forest near Kunming.

If the sight of natural crystalline beauty thrills you, then there's a winter destination in northeastern China you really need to visit. The city of Jilin offers an ice-covered wonderland of trees covered with rime ice like a deep frost that is stunning to the eye.

Rime forms when the water droplets in fog freeze onto objects they touch. In most populated areas this is a rare event because it requires relatively warm, moist air to come in contact with subfreezing temperatures at ground level.

Elsewhere this is a rare occurrence, but the unique environmental conditions in Jilin make it an annual event. The city of Jilin sits along the Songhua River, which is one of the few rivers in Jilin province that does not freeze over in winter.

The Songhua River stays warm because of the Fengman Hydropower Station, located upriver from the city. The warm water feeds vapor into the air, which condenses into fog as it cools. The water in the fog then freezes as it hits the cold winter air nearby.

The best time to visit Jilin, if you want to see the rime, is during the winter months from December to mid-March. The city holds a "Rime Ice and Snow Festival" every year during the second ten-day period in January.

The city of Jilin is in Jilin Province in northeastern China, east of the provincial capital of Changchun. The closest airport is Changchun Longjia International Airport, which handles domestic flights as well as oversea routes from Seoul and Tokyo. From the airport, the drive to Jilin is about 70 kilometers, or you could take the high speed rail. Railways run from Jilin to several of the major cities of China as well, including Beijing and Shanghai.

Getting Around in Jilin

It's very easy to travel through the city by taxi, and the cab drivers in Jilin have a reputation for honesty. If you travel here to see the rime ice in winter, be sure to dress warmly, as daytime winter temperatures usually stay below the freezing point. There are several good hotels in the city of varying price ranges, and many restaurants.

What Else Is There to See?

The city of Jilin is home to the largest Confucius temple in Manchuria, and the largest museum of meteorites in the world. A short drive or train ride away, in Changchun, you can visit the former residence of Puyi, last emperor of China and emperor of the Japanese puppet empire of Manchuko.