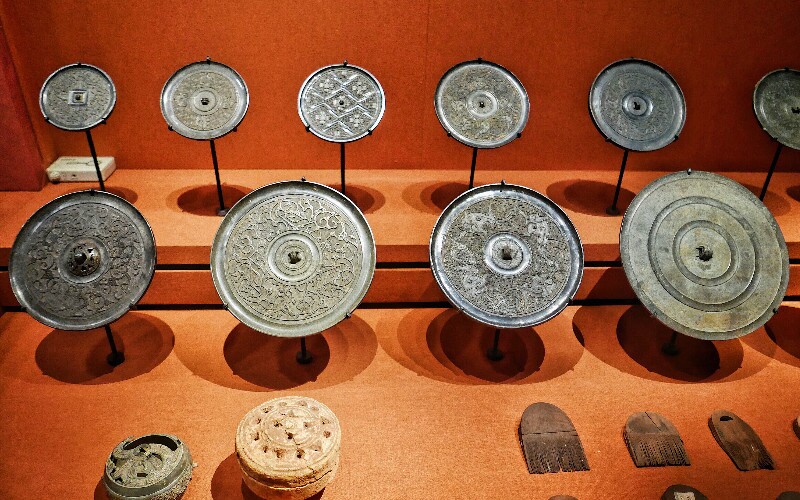 The collections of the Mawangdui Han Tomb are gems. The tombs were unearthed from Mawangdui in the east suburb of Changsha city near Liuyang River between 1972 and 1974. The female corpse excavated form the No one Han Tomb has a history of over 2,100 years.

It is well preserved and similar in condition to a fresh corpse: the entire body is lenitive, some of the joints can be moved, and the parenchyma remains flexible. It is different from a mummy or cadaver tanned in peat hog, and represents a miracle in antisepsis. When the tomb was first discovered, it shocked the world and has attracted many scholars and tourists. After anatomization, the body and entrails of the corpse are on display in a specially designed basement.

More than 3,000 relics have been unearthed from the three tombs, most of which are well preserved. There are 500 pieces of lacquer works, which are delicate, luxurious, and shiny as new. The abundant silk products from No 1 tomb are quite precious, and include well-preserved thin silk, silk, yarn, brocades, and so on.

One of the most outstanding specimens is a silk coat as light as the mist and as fine as gossamer. It is 1.28 meters (about 1.40 yards) in length and comes with a pair of long sleeves, but weighs only 49 grams. The silk paintings are the earliest works discovered that describe daily life at that time. There are also color potteries, silk books, weapons, musical instruments, seals, and so on.

The lacquered surface of the coffin excavated from No 1 tomb is decorated with unique images of animals and gods, and has relatively high artistic value. The numerous silk books unearthed from No 3 tomb represents precious historical literature material.

The books cover ancient philosophy, history, technology, and so on. There are 28 different types of books totaling 120,000 words. There are also several books with illustrations, most of which are lost ancient books.

A map excavated from No 2 tomb provides another surprise. Its drawing technique is very advanced, and the place marks are similar to that on a modern map. Foreigners praised it as ‘a striking discovery’ when exhibited in America, Japan, Poland, and many other countries.

The Wanwanghui Han Tomb site is located in the east suburb of Changsha City, five kilometers from the center of the city. According to legend, it is the tomb of Ma Yin, the King of Kingdom Chu, and was thus named Mawangdui. Among the three Han tombs, No 1 tomb belonged to the wife of Li Cang, and No 2 tomb was for the son of Li Cang, Marquis Quan Li Cang, administrator of Changsha at the beginning of the Han Dynasty.

Of the three tombs, No 1 tomb is the largest at 19.5 meters long from north to south, 17.8 meters from east to west, and 16 meters deep. Now, No 1 and 2 tombs have been blocked, and No 3 tomb has been preserved after being reinforced. A new cover was built to make it convenient for people to visit the tomb.

Mawangdui Han Tomb has become a treasure of China, and tourists from abroad often mention it and Qin Terra-Cotta Warrior and Horse Figurines in the same breath.

China Highlights can help you customize a tour to visit Mawangdui Han Tomb and other highlights in Hunan.