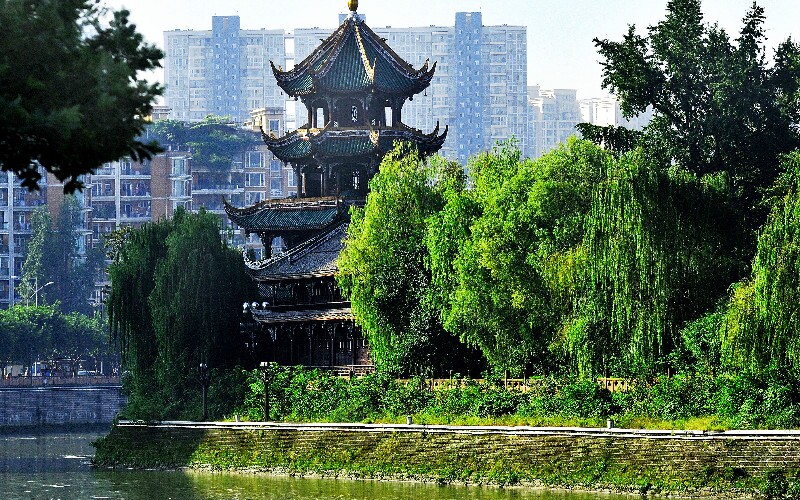 Wangjiang Pavilion Park is located in a lush bamboo forest by the Jiangjiang River out of the Eastern Gate. It has an area of 177 acres with most of them covered by bamboos. It was built in the Ming and Qing dynasties to commemorate Xuetao, a famous poet in the Tang Dynasty. Right after you pass the gate, what comes to your eyes is a luxuriant bamboo grove. In the grove, there are almost 150 types, and quite a lot of them are precious ones from Sichuan, the Southern China, Japan and Southeast Asia.

Wangjiang Pavilion, also called "Chongli Pavilion", was once the landmark of Chengdu. Built in the fifteenth year of the Guangxu Period in the Qing Dynasty, it is 39 meters high and has four floors. In the first two floors, it has four angles; in the other two floors, there are eight angles. All of the ridges are delicately decorated with clay sculptures of animal as well as sculptures of human.

Teahouses, fishing area, amusement park are distributed along the river. People in Chengdu are fond of drinking tea in teahouses. These teahouses not only feature long history and large numbers, but also have their own unique styles. As long as you enter a teahouse, you can smell the intense fragrance of Chengdu. You can see bamboo armchair, small square table, tea set with covering, huge kitchen range and red copper pot. The teahouses are crowded with all kinds of businesses. There are sellers of melon seeds and peanuts as well as the ones providing the services of picking ears, polishing shoes and massage. Some others gather there to play mahjong or cards, talk about businesses, and do some writings. It seems that they all have a strong affection to the teahouses. From what have mentioned above, the leisure of the life in Chengdu can be seen.