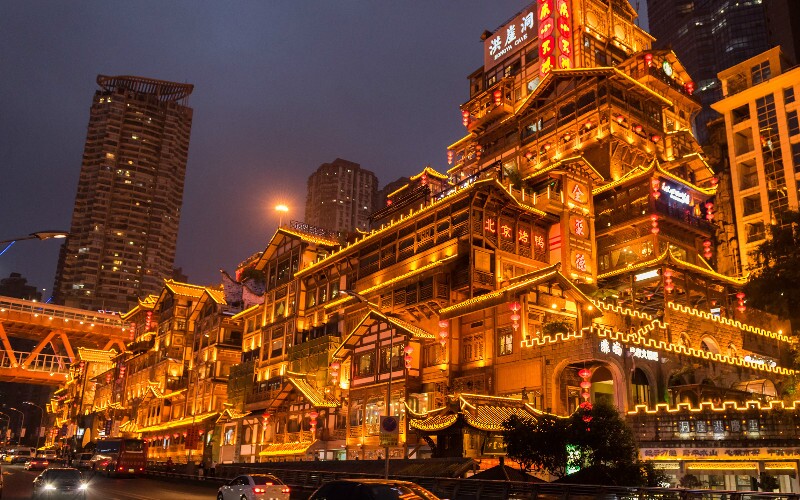 Free Things to Do in Chongqing

Chonging, also called the Fog City, is located in the central part of China. The beginning of the Yangtze River Cruise is downstream and the ending point is upstream. Travelers visiting Chongqing are mainly there for the Yangtze River Cruise, however, there are still other interesting places to visit, and they are free. Here is a list of them.

The whole place is built on a cliff and the view is fantastic. It is located in the heart of the Jiefangbei business center, as well as the intersection of the Yangtze River and the Jialing River. The buildings are mainly in the Chongqing stilted style. The place is divided into many levels, containing restaurants, markets, shops and hotels.

There are lots of local snacks - many are terribly hot - however, some foreign foods are also available, such as Mexican food. While enjoying the food, you can also appreciate some snack-making shows and a fantastic river view.

Wu River is the biggest tributary in the Three Gorges Reservoir Region being 1,050 kilometers long.

Though it is not big, the scenery is stunning. It is described as the "Wu River Gallery" and is famous for its cave, two rivers and seven gorges.

The cave is known as the Lotus Cave (where you can see spectacular stalactites, similar to the Reed Flute Cave in Guilin). On the two rivers and the seven gorges, the stunning natural beauty will make you wish you didn't have to go home.

The water is limpid and green. The local Chongqing style residences and the mountains on both sides are like an oil painting.

You can go there to fish, or take a boat on the river, or taste the Wu River fish. There are some tea booths for you when you are thirsty.

Tip: the road along the river is a little narrow so please watch your step.

Transportation: you can take a downstream boat or a bus from Chongqing Chaotianmen Port to Fuling, and then take a boat upstream to the Wu River Gallery.

Ciqikou Ancient Town is a pedestrian shopping and dining area which is three kilometers from Chongqing. It was established in the Song Dynasty (960-1279).

All streets in Ciqikou during the Ming and Qing Dynasties were large and paved with green flagstones. The main street ran about 2.5 kilometers in length. Beautiful porcelains, souvenirs, local snacks and other items can be found there.

The two famous local snacks are Maoxuewang (this is quite a hot snack using duck blood as the major ingredient and cooked with other meat, eel, sleeve-fish, bean curd and large intestines) and Pepper Salt Peanuts.

It is a museum which can provide you with information on the construction of the Three Gorges Dam and the local history, as well as an explanation as to why 1.3 million people all volunteered to be relocated.

It exhibits the spectacular natural scenery of the Three Gorges, ancient Chongqing, the urban history and the war time.

The theme exhibitions are: calligraphy, paintings, coins and porcelains from different generations, a sculpture of the Han Dynasty, and some documents endowed by Li Chuli.

There is a limit of 5,000 visitors per day. Groups of over 200 people need to book an appointment two days in advance.

Gele Mountain is the emerald diamond of the mountainous city of Chongqing. As the first forest sports park, it has the biggest rock climbing field in south-west China. The Fairy Lake is a popular fishing paradise in Chongqing.

Chongqing was once the second capital of China during the wartime and there are some historical relics from that period. The White House and the Zhazi Cave Prison are the most well noted ones. Due to the publishing of the war novel, Red Rock, Gele Mountain became a hero's mountain. There is a martyrs' park in memory of those heroes.

You can't visit Gele Mountain without trying the famous food of Spicy Chicken.