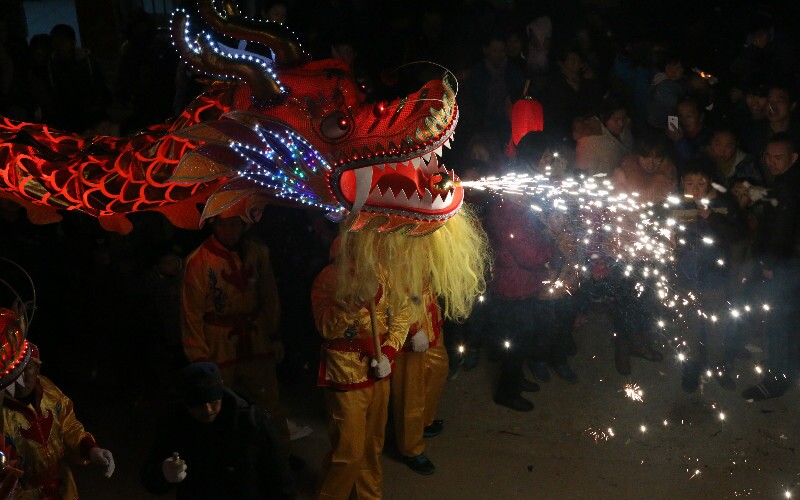 Qijiang, Chongqing, is a county mainly focusing on agriculture, which has a folk art - Qijiang farmers' prints - combining carved stones, wood carving, clay, paper-cutting, embroidery, batik and other ancient arts. Characterized with a vivid, lively, beautiful, simple, natural, and humorous style, it is a wonderful type of Chinese folk art that is highly praised by domestic and foreign art circles.

Tongliang is located in the north-west of Chongqing, 103 kilometers away from the downtown area. The Tongliang Dragon Lantern there is not only a colorful dragon and lamp prop for the dance, but is also a comprehensive piece of art collecting music, painting and handicrafts. It mainly has three features: big, long and live. Big refers not only to the shape, but to its exaggerated design.

Gathering Chinese paintings, sketches, paper cutting, embroidery and other skills together, the Tongliang Dragon highlights the temperament of the dragon, making itself look plump and magnificent. As for the length of its body, it can be divided into 24 sections in moderate proportions and is very flexible. As it is introduced in its mechanical principle with useful tools, such as hands, springs, and electrics, these enable the dragon to dance in a more lively fashion; that's Live！

Tujia and Miao Autonomous County of Xiushan, Chongqing, is situated at the juncture of the Hunan, Hubei, Chongqing and Guizhou provinces, where there are beautiful hills and waters, outstanding people as well as rich folk arts and culture, especially the most popular Festive Lantern.

Xiushan Festival Lantern is a comprehensive art collection of songs, dance, percussion and harp strings, which originated from the jump around (an aboriginal ritual dance form) of the indigenous people in the Yuan Dynasty.

As influenced by a variety of national cultures, it gradually developed into a unique style of folk art.

There are props for the lanterns. One is flowers, with all kinds of colorful hand cut flowers inlaid on the lantern. The second is lamps, which are made of bamboo, white paste and colored ribbons divided into these shapes: rectangles, hexagonal and squares. The third is fans, such as a punka, a folding fan and a double fan. Another is tables which are the main original props for the lanterns.

Xiushan County, known for its Lantern Opera, is called the Lantern Dance Town. Lantern Opera - an art which originated from the light game of the Han people, which was mixed with song and dance skills of the Xiushan Tujia and Miao people, and has now been developed into an art form with a novel style - is a beautiful dance favored by the Han people and those from Tujia and Miao Autonomous County.

Waving Dance is an ancient folk dance of Tujia which began in the Tang Dynasty and is continued today.

When dancing, if the number of people is less than dozens or several hundreds, they call it the Little Waving Dance. However, if over tens of thousands of people are dancing, it is known as the Big Waving Dance. The dance form includes a "pendulum 单摆", "double pendulum 双摆", "swing wave 回旋摆", and so on. Reflecting upon their travels across mountains and rivers, farming labor, battle stances, rock eagle wings and daily lives, these dance movements stretch across generations and are related to ordinary life, which shows the bold characteristics of the Tujia people.

The traditional Liangshan lights, Liangping New Year paintings and Liangping bamboo are known as the Top three arts in Liangping. They were once wonderful works which were famous in Eastern Sichuan and were named as one of the ten largest Bayu folk arts in 2000.

The Liangshan Lantern is Liangping's indigenous folk opera. In the Ming Dynasty's Zhengde years (1506 - 1522), it stood out from the other folk arts with its playing lights and yangko drama. From the mid Qing Dynasty, the Liangshan Lantern became popular throughout urban and rural areas. Every festival, it would be seen on the stage, and has gradually spread, forming the "tunes of Liangshan" with dozens of operas in the mid and lower reaches of the Yangtze River and hundreds of counties in 13 southern provinces.

Liangping New Year paintings originated in the early Qing Dynasty and have a history of 300 years. Being used in romantic techniques with a bold artistic refinement, the theme was based on auspicious and historical stories. Besides, with the feature of a unique and exquisite design with vivid and humorous characters, the works have a strong flavor of rural life. As the chromatic woodcut prints have a high artistic value, it was equipped with the technologies used in animation, paper cutting and comics. It has simple, vivid and complete paintings with an unrelenting strength and strong contrast, which look extremely beautiful. Being rich in cultural connotation, it is really worth looking at a hundred times.

Liangping bamboo has a production process history of over thousands of years. In the early years of the Northern Song Dynasty, it was listed as the Royal tribute, renowned in the world and known as the best curtain in the world, according to historical records.

Using bamboo that is plentiful in the local area as a raw material, combined with calligraphy, painting, embroidery, flocking and many other kinds of methods, Liangping bamboo has adopted traditional techniques and has produced arts and crafts like curtains, screens, decorative paintings and is practical in various forms. With its elegant color and fine workmanship, it possesses strong local characteristics and a natural charm.