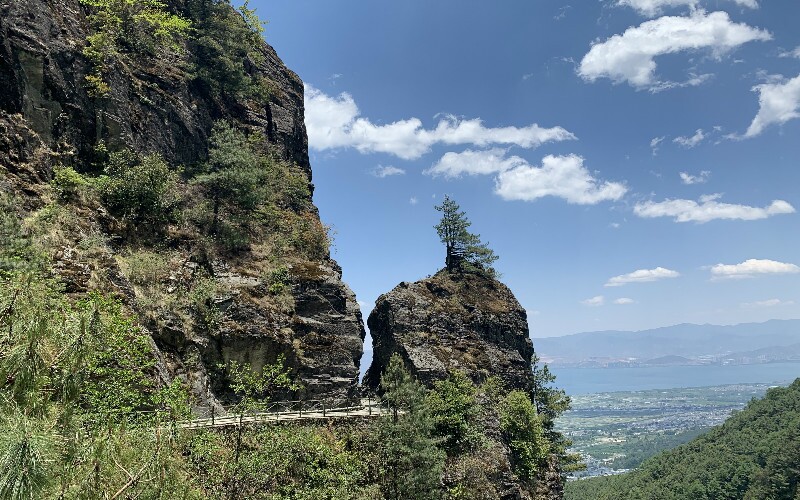 The Grotto of the General (also called the Temple of the General) is a temple dedicated to General Li Mi who was a Tang Dynasty army commander who died during his attack on the Nanzhao.

The temple is about 2 kilometers northwest of modern Dali on Cangshan Mountain. The park occupies 0.67 hectare (about an acre and a half), and it is composed of the Gate Tower, the Bazi Building and the Main Hall.

One of the traditional religions of the region had many gods, of which the historical Tang general Li Mi was the god of mountain spring. It is curious that a general who was defeated and whose army was destroyed would be worshiped as a god in the region.

The temple is in a park area on scenic Cangshan Mountain, and there are trees and a small waterfall nearby.

At the beginning of their empire building era in the eighth and ninth centuries, the Nanzhao Kingdom was between the powerful empires of Tibet and Tang Dynasty China. They were pressured by both powers.

In the early 750s, Tang officials in Sichuan launched several campaigns against Nanzhao that all failed, partly because the area had the natural defenses of the surrounding mountains and the large lake to shield them. It is recorded that the Nanzhao ruler Geluofeng attempted to make peace with the Tang Dynasty.

Then the Nanzhao rulers made an alliance with Tibet and submitted themselves and gave levees. The Tang Dynasty in turn sent an expedition against Nanzhao led by General Li Mi.

General Li Mi led a large army said to be composed of 100,000 combat troops backed by 100,000 support personnel. In 754, this army closed in on the Nanzhao by both land and water.

According to historical accounts, the Tang army built a dockyard to build warships on a river leading into Erhai Lake, but torrential rains demoralized the Tang and their supplies ran low, and malaria caused many deaths. Then Nanzhao on boats attacked the Tang dockyards and set the boats on fire.

General Li Mi then attacked the central Nanzhao territory on the west bank of the Erhai Lake from north and south. The two parts of the army were both virtually wiped out, and Li drowned in a river. Other accounts say that he committed suicide by drowning.

The bodies of the 200,000 or so men littered the land, and their bodies were gathered and buried under large mounds of earth after some funeral rites. These mounds that are known locally as the "Tombs of One-Hundred Thousand Men" and "One Thousand Men Tombs” can still be seen today.

This area is famous for its nearby attractions that include the Three Pagodas, Cangshan Mountain with its excellent hiking, many peaks, great views and natural scenery, and Erhai Lake. Travel in the valley area is easy. To get into the mountains, you can chose to hike, ride horses, ride in a vehicle on the roads or ride the cable car from the ancient district of Dali.