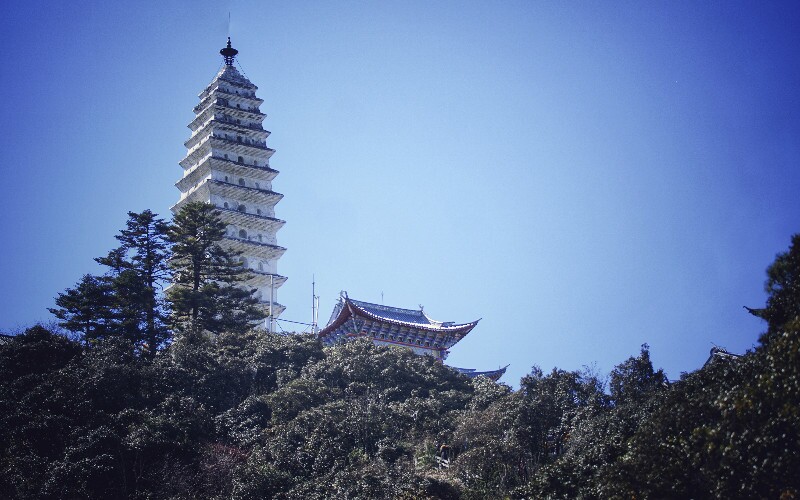 At the top of the jagged peak of Jizu Mountain that is covered by a dense forest sits a striking tall white pagoda called Lengyan Pagoda. It is beautiful ancient temple with 13 stories, and was first built about a thousand years ago. The peak is about 3,250 meters (10,660 feet) high, and the pagoda adds another 42 meters (137 feet). The peak is the highest peak on the mountain, and the almost vertical cliff mounting up from the deep valley to the pagoda at the top is a striking sight. The sights from the second floor of the temple is said to be beautiful, especially at sunrise and sunset. You can see Lake Erhai and the Cangshan Peaks, and you may even see the city of Dali. The mountain is covered by dense forests and bamboo, and it has several other high peaks, shorter peaks, dozens of caves, temples, temple ruins, and other places to hike to, but hiking on the peaks is strenuous and a little dangerous. But a road goes about two thirds of the way up the peak, and there is cable car to the peak. By visiting this area, you'll see ruins and ornate religious architecture built over the millennia and enjoy beautiful views and good hiking in a non-touristy place where few foreigners hike in.

The mountain used to have many Taoist and Buddhist temples, but many were destroyed during the Cultural Revolution. It is one of China's famous Buddhist and Taoist mountains. The area isn't touristy, but Buddhists come here to worship. And the high peaks have paths that are strenuous to climb, but you'll find some solitude. There are accommodations at the peak itself and halfway up the mountain. Jinding (Gold Peak) monastery where Lengyan Pagoda is located has rooms for accommodation for hikers.

There are many temples and structures, but most sites are not well preserved. Since the Tang Dynasty (618 to 907), scores of temples have been built on the mountain and repaired many times. The principle preserved buildings on the mountain include Lingshanyihui, Zhusheng Temple, Lengyan Pagoda, Jinding Temple, Copper Buddha Hall, Jiaye Hall, Huideng Nunnery and Taizi Pavilion. Many structures were destroyed during the Cultural Revolution.

On the tallest peak of Jizu Mountain is a monastery that includes the ancient Jinding Temple and Lengyan Pagoda. The square-shaped pagoda was built after the Tang Dynasty, but it looks similar in style to the Tang Dynasty pagoda in the ancient city of Dali. But this was built at the top of a very high and steep peak. Imagine the work that went into its construction a thousand years ago! The attached Jinding hall has statues where Buddhists go to worship. The original Jinding Temple was moved from Kunming to this mountain in 1637. On a clear night, you can see the Milky Way and thousands of stars. If you stay in the accommodations nearby, you can see the sunrise.

Hundreds of years ago, a Chinese traveler in the Ming Dynasty period named Xu Xiake (1586-1641) said: "On the top of Tianzhu Peak, people can admire the sun-rise in the east, a sea of auspicious clouds in the south, Cangshan Mountain and Erhai Lake in the west, and Yulong Snow Mountain in the north."

Zhusheng Temple is the biggest temple on the mountain, and along with Jinding, it is the most famous. The Zhusheng Temple was built in the Ming Dynasty era. In 1983, it was listed as a major cultural relic under national protection in China.

The straight line distance between the modern Dali on the southern shore of Erhai Lake to Jizu Mountain (Jizushan in Chinese) is only about 45 kilometers. But the driving distance around the lake and up a valley is about 100 kilometers to the town of Binchuan in a valley below the mountain. The trip to Binchuan from Dali takes about two hours. From there to the Huideng Temple is about another 30 kilometers, and buses and vans are available. There are horses, a walking path, and a cable car from there to Lengyan Pagoda.