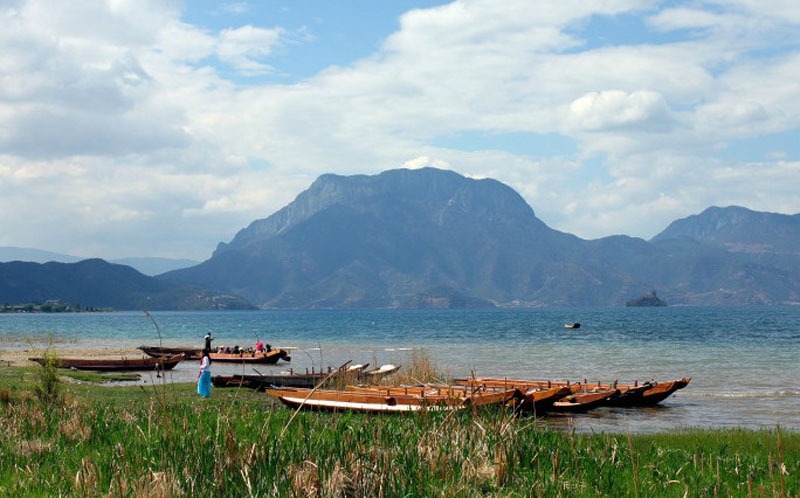 Nanzhao Folk Island is a tiny island in large Erhai Lake near the village Shuanglang. It is one of several islands and islets that dot the lake. It is also called Nanzhao Love Island. Its Chinese name is Nanzhao Fenqing Dao. It was turned into a Nanzhao theme park and resort complex in 1999. Before that, it was called Yuji Island. In the theme park, you can enjoy the sights of the lake and the surrounding region from the heights on the tree covered hill. There is also a small beach with white sand. The island is in the northeast part of Lake Erhai. Along with the natural trees and the lake for scenery, there are specially built attractions and a small amusement park. Nanzhao Folk Island is tiny, but it is big enough to have a big hotel sitting on the crest of the hill, a dock, some villas, and a park with trees. If you want to get away and relax in a villa or the hotel, it may be a place for you.

Along with the hill, trees, beach and the lake and surrounding mountains for scenery, there are eight man-made sites that are part of the Nanzhao theme park. These sites are the statues of "Mother Shayi" (Shayimu in Chinese), the Seascape Villas, the Guan Yin Acuoye Statue on the Luck of Yunnan Square (Fuxing Square), the big hotel called the Nanzhao Summer Palace, the Square of the Patron Gods, a small amusement park on the beach, the Taihu Rocks, and a View of Fishing Families.

When you get off a boat at the dock, you see sculptures of the "Mother Shayi" (Shayimu) myth. In that story, a woman gave birth to a dragon's children. This was said to be the beginning of the Ailao people. A Chinese historian wrote more than one thousand years ago that the Nanzhao rulers claimed to be descended from the Ailao people.

To the west of the statue of Shayimu is a statue of the Acarya Avalokitesvara or Guan Yin Acuoye.It stands in a square called the "Luck of Yunnan." This statue is 17.5 meters tall and is made of white marble. Near the statue is another group of statues.

At the top of the hill is the hotel called the Summer Palace. It looks kind of like a medieval European castle, except for the Chinese style rooftop. In front of the Summer Palace on the Nanzhao Folk Island, is a group of copper statues on Patron Gods Square. These represent five patron gods worshipped by Bai people. The Taihu Rocks are weathered boulders that Chinese put in gardens.
Here is a photo of the island. https://www.chinahighlights.com/photo/dali/nanzhao-love-island/

Around the island, you can visit Nanzhao historical sites or a Nanzhao theme park, visit the villages and towns on the shore, or visit other islands or islets. If you are interested in Nanzhao history, there are several highlights in the area including the Three Pagodas, Nanzhao Cultural Town, and Precious Stone Mountain.

The Three Pagodas are on the western shore in the old sector of Dali.

Nanzhao Cultural City. The park is composed of Lixing Palace that has wax statues of Nanzhao people, Dance and Music Palace that features Bai music and food, Royal Garden that is a big garden, and Nanzhao Cultural Street where you can buy Bai craft objects like marble art, dyed cloth and traditional medicines and watch the craftsmen at work.

Perhaps the best place to gain an appreciation of Nanzhao religion, art and culture is Precious Stone Mountain (Shibaoshan) that is about 4 hours away on the road going north out of the Dali Valley.

The lakeshore itself can be explored by hiking or on rented bicycle. Other highlights nearby include

Erhai Lake Park on the southern shore of the lake in the modern sector of Dali (Xiaguan) and the Butterfly Springs Park on the Western bank.

Other islands and islets on the lake you can visit include Jinsuo Island (Golden Shuttle Island) and utuo Island. You might enjoy a boat ride on the lake, but negotiate about the price before you get on.

By boat, Nanzhao Folk Island is about an hour away from modern Dali (Xiaguan). It is a few minutes away from the town of Shuanglang.

1. Negotiate about the price of a boat ride before you get in.

2. A good way to see the sights in the valley is by rented bicycle.

3. The ancient district of Dali is a pedestrian area that is kept free of vehicles.

4. If you to stay on the island, you can choose the villas or the hotel.