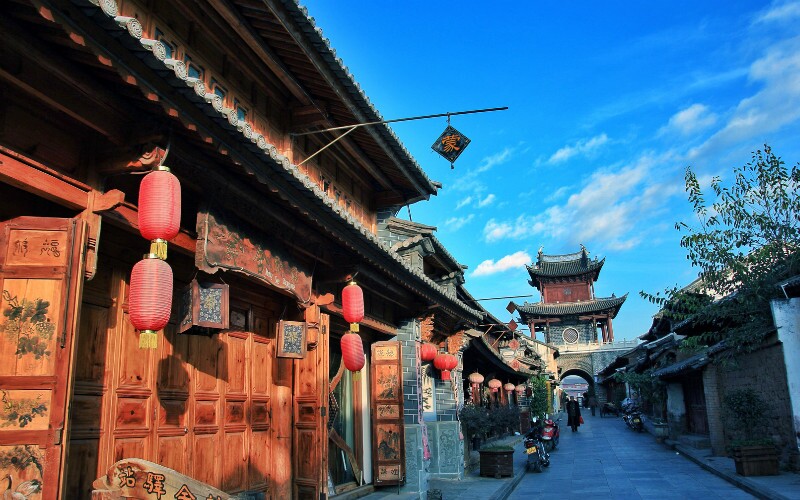 The Weishan Yi and Hui Nationalities Autonomous County is a fantastic place inhabited by ethnic minorities. Discover the rich ethic folk culture and primitive art. The whole city has been well-preserved with architectures of the Ming (1368–1644) and Qing (1636–1911) dynasties.

In 1994, the ancient Weishan County was listed as one of the historical and cultural cities in China, as well as one of the four states of literature in Yunnan Province.

It was also the birthplace of Nanzhao Kingdom, a local government that was relatively independent of the central government of Tan Dynasty (618–907), so naturally, there are many historical remains and legends alike. Inside the county live 23 nationalities, including six permanent residents Han, Yi, Hui, Bai, Miao, and Lisu. They have settled down here for more than 100 years.

Weishan County with a long history has numerous historic sites and scenic spots, worthy to be visited and researched. The county has preserved more than 2,100 cultural relics in museums, and over 30 cultural relics sites under province, prefecture and county-level protection, such as the ancient city built during the Ming Dynasty (1368–1644), Weibao Mountain, one of the fourteen famous Taoist mountains in China, and Dong Lianhua (East lotus) Village, one of the permanent post for horse caravans during Ming and Qing Dynasty.

In addition, there sit a total of 22 mosques, all with a complicated architecture complex and unique folk styles. In the reign of Emperor Qianlong in the Qing Dynasty (1644-1911), Weishan was conferred the title of Famous State of Literature by the emperor.

The preserved Weishan City, built in the twenty-second year (1389) of the Hongwu reign in the Ming Dynasty, has a history of over 600 years up to now. It was the birthplace of Nanzhao Kingdom, a local government which was relatively independent of the central government of Tan Dynasty. Surrounded by thick walls, the city only has four gates in each direction. Inside the city constructs rectangular layout and street system of chessboard type. There are totally 25 streets and 18 lanes.

The symbol of the city must be two lofty buildings, Gongchen Building (拱辰楼) and Xinggong Building (星拱楼). Besides, the whole city has been well-preserved with architectures of the styles in Ming and Qing Dynasty, such as Wen Temple, Wenhua Academy, Yuhuang Pavilion (Jade Emperor Pavilion), and Dong Yue Temple.

A high city wall surrounded serves as both defensive and retaining device for the city. On the north part of the wall built the famous gate tower, Gongchen Building, a double-eave magnificent tower, on which two inscribed horizontal boards are hung respectively, one with “Kui Xiong Liu Zhao” (魁雄六诏) facing south and another with “Wan Li Zhan Tian” (万里瞻天) facing north.

The tower, supported by 28 huge pillars, has a height of 23.5 meters, with an 8.3-meter foundation. When standing on it, you will have a bird’s-eye view of the ancient city inside, and Weishan plain.

Located in the south of Weishan County about 70 km (43 miles) north of Dali, Weibao Mountain looks like a crouching lion that turns its head back and looks at the county seat and the belt-like Guajiang River (瓜江) in the mist.

As one of the fourteen famous Taoist mountains in China, Weibao Mountain features a combination of enchanting scenery and refined ancient architecture and has been proclaimed as a key cultural relics site under provincial protection. It covers an area of 19 square kilometers (7 sq. mi.) with the main peak altitude of 2569 meters (8428 ft).

Weishan Mountain can be divided into two parts: the front range and the back range. There are over 30 scenic spots, such as Xixin Pavilion (洗心间), Yinli Spring (银粟泉), Qixing Well (七星井) and other attractions, which are often associated with legends and folk tales.

In addition, it was the birthplace of the Nanzhao Kingdom and a famous Taoist mountain, and today holds Taoism song performances and the Yi's music performances now and then.

Tie-dyed cloth, in particular, has won Weishan the title "the hometown of the art of Chinese tie-dyed cloth”. What’s more, Weishan tie-dyed cloth has been exported to Japan, Europe, America, countries in Southeast Asia and other countries.

Weather: Weishan County features a northern subtropical plateau monsoon climate. The average temperature is about 16°C (61°F) for a year. Generally speaking, four seasons are all suitable to travel to Weishan Mountain. However, in the winter it is slightly chilly with winds, and it is also a pity that travelers may not have the opportunity to taste all delicious snacks.