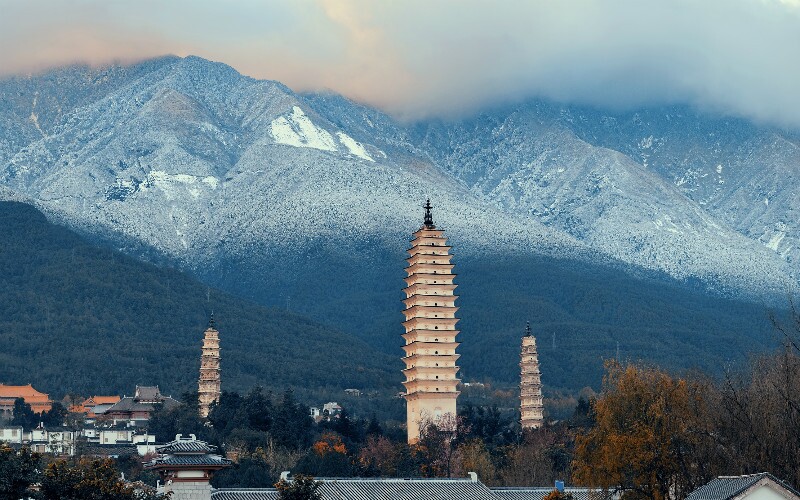 The Three Pagodas of Dali are famous in China for their size, beauty, and antiquity, and for their preservation. The central one is more than 1,100 years old and is one of the tallest pagodas ever built in China.

These pagodas are situated between Cangshan Mountain and Erhai Lake, about 1.5 kilometers (.9 of a mile) northwest from the ancient city of Dali, so a walk to the temple would be a good excursion. The Three Pagodas are a highlight of a trip to Dali.

The Three Pagodas are cream-colored, delicate-looking pagodas. They are situated in the shape of a triangle. The tallest and oldest of the three was built during the reign of a king of the Nanzhao Kingdom about 1,150 years ago.

The other two were built about 100 years later, probably by the Kingdom of Dali. They are made of brick. They stand at the foot of one of the high peaks of nearby Cangshan Mountain named Yinglo Peak.

The tallest pagoda is one of China's best preserved buildings from the time of the Tang Dynasty, and the smaller two pagodas differ in style.

The main pagoda is called Qianxun. It is said that it was completed about the year 840 AD by a Nanzhao King named Quan Fengyou. It is 16 stories, stands 69.6 meters (227 feet) high, and it is one of the tallest pagodas ever built in China. It is a square shaped. At the bottom, the walls are about 3 meters (10 feet) thick. It has yellow eaves that contrast with the white fa?ade of the pagodas.

The main pagoda looks like a typical Tang Dynasty pagoda, and it is said that architects from Xian which was the capital of the Tang dynasty designed this building.

To the east of it stands a stone wall which is engraved with the words "govern the mountains and rivers forever," In 1978, during repairs more than 600 artifacts and documents including sculptures made of gold, silver, wood or crystal were found.

Coins, a bronze mirror, porcelain, articles used in Buddhist ritual, musical instruments, gold and silver articles, and matrices for printing Buddhist scriptures in Sanskrit have been discovered in the building or underneath it. It is interesting that in 1979 three copper plates were found that stated that the pagoda was repaired in 1000, 1142 and 1145.

The other two pagodas were built about 100 years later. It is thought that they were built by rulers of the Dali Kingdom that succeeded the Nanzhao Kingdom. The smaller pagodas' architectural style is more similar to that of Song Dynasty pagodas.

They each have ten stories, are slimmer, and are about 42 meters high or about 140 feet tall. The pagodas are empty from the first floor to the eighth floor and have supporting girders inside. The two smaller pagodas stand about 97 meters away from each other. One of them is interesting because it leans like the Tower of Pisa in Italy.

The capital of this kingdom was then set up at Taihe which is a few kilometers south of the present ancient Dali. The Nanzhao had control of East-West trade routes from China through Myanmar (Burma) to India.

By the 9th century, the Zanzhao Kingdom has expanded into the area that is now Burma, Thailand and Laos, and it took control of the area of Sichuan including the city of Chengdu. Nanzhao attained a high level of culture. And it was then that the main pagoda was built.

Once you arrive at the ancient city of Dali, getting to the Three Pagodas is easy since it is very close.