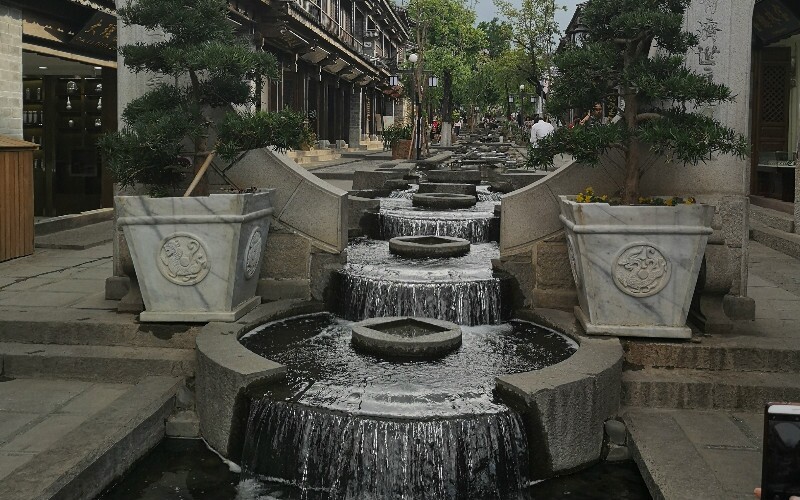 Yuer Park is a small preserved park in the ancient district in Dali that is close to Foreigner's Street (Hu Guo Lu) and the North Gate. It lies between them on Yuer Road. It has a lot of marble objects, water and gardens. It is the only park in the ancient district, and on a visit to Dali, it may be a good place to go for a stroll or relax. There are trees, gardens and a lot of finely crafted marble. The park is a square-shaped area of almost two hectares or about 4 and a half acres. There are marble gates, walls, bridges, statues, paths, and seats in the park. In the park, there are seven special gardens for different plants: camellias, cherry trees, peonies, cuckoos, plum trees, Chinese roses and bamboo. Intellectuals, painters and calligraphers were invited to help decorate the garden.

In the garden, you can see a lot of finely crafted marble. The Bai people who had this park built apparently like marble. There are marble pavilions and pools. A tiny bridge in the park is carved intricately and a gate is brightly painted. The ancient city of Dali is one of Yunnan's most popular tourist destinations, and while strolling around the town and visiting the Bai architectural sites, it may be a good place to visit to see a Bai garden.

The city has a long history dating back to the time when area was the center of the Nanzhao Empire. The present ancient city of Dali was mostly built during the Ming dynasty, though there are some older buildings and structures remaining from earlier eras. In particular, the famous Three Pagodas of Dali which is only about a kilometer and a half away from Yuer Park has some of China's best preserved buildings from about the time of the Tang Dynasty. The present ancient city of Dali is preserved by the government, and it doesn't allow modern construction within the area of the four gates to retain the traditional architecture and preserve Yuer Park.

If you are in the old district, getting to Yuer Park is easy. The whole historic district is small enough to get around in on foot, and it is laid out in a grid so it is easy to find your way and get directions. The town is good for pedestrians, since vehicles are restricted. The park is on the northern end of the town about three streets from the North Gate. You can walk down Fuxing Road from the North Gate or the South Gate and turn east on Yuer Road.

The modern sector of Dali is only about 20 kilometers away. From there you can catch a train, buses or flights. Dali is about 350 kilometers away from Kunming, the capital of Yunnan Province. Yunnan Province is in the south of China and borders Vietnam. A flight between Kunming and the airport near Dali takes more than an hour. A train trip from Kunming takes about 8 hours. Kunming is about 6 hours away by bus.

dali How to Plan a Trip to Dali

dali Top 7 Things to Do in Dali