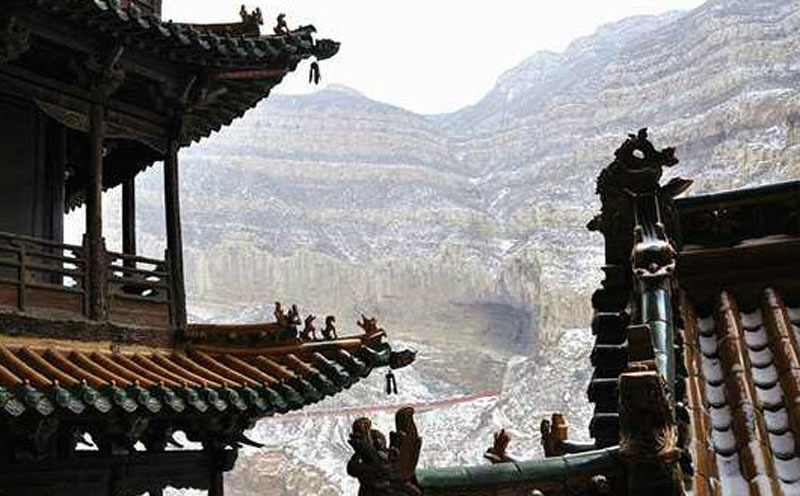 Mount Hengshan is the northernmost of the Five Sacred Mountains in China.

Mt. Hengshan, also variously called Ziyue, Hengzong or Changshan Mountain, is the northernmost of the 'Five Sacred Mountains of China', or 'Wu Yue', as they are called by the Chinese, in recognition of the mountains' link to Taoism. The highest peak reaches an altitude of 2017 meters (6617 feet).

Mt. Hengshan has historically been a sacred place for Taoism and a venue for Taoist activities. Legend has it that Zhang Guolao, one of the Eight Immortals in Chinese Taoist mythology, secluded himself on Mt. Hengshan, where he continues to follow the teachings of Taoism.

Mt. Hengshan offers some spectacularly beautiful scenery. The soaring mountain peaks and the undulating curves of the mountain ridges, the steep, precipitous cliffs, the grotesque and fantastic caves, the dense and verdant tree cover, the gurgling, meandering brooks, full of the singing and chirping of birds, not to speak of the canopy of clouds and mist that variously - and to varying degrees - veils and unveils the mountain and the skies that surround it, all bear witness to how Mt. Hengshan was able to call attention upon itself as one of Taoism's 'Five Sacred Mountains'.

Tianfeng Hill and Cuiping Hill are divided by tree-filled escarpments, in the center of which lies Golden Dragon Gorge, which, from above, looks menacing, so deep is the gorge and so narrow at its base, being hardly ten meters wide. The gorge has acted as a natural defense barrier of strategic importance to military commanders ever since armies first set foot on Mt. Hengshan. During the Northern Song (CE 960-1127) Dynasty, when General Yang Ye and his sons managed to hold back invaders from the neighboring Liao (CE 916-1125) Dynasty, Golden Dragon Gorge was their ultimate line of defense.

Other scenic sites such as Guolao Hill, Sisters-in-Law Cave, Flying Stone Cave, Huanyuan Cave, Tiger Wind Gap, Clouds Out Cave and Big Character Sinus are not only full of color, they are also full of mystery, as their English-equivalency names-where meaningful-suggest. The cloud-and-mist cover on Mt. Hengshan changes capriciously; when it is clear and sunny, the entrance to Clouds Out Cave appears as inconspicuous as that of any cave, but when it is rainy or foggy, white mists and clouds will continuously waft out of the cave's entrance, giving it a surreal appearance.

The most fantastic natural wonder of Mt. Hengshan, however, is surely the Sweet and Bitter Wells located halfway up Mt. Hengshan. In spite of the proximal justaposition of the two wells - hardly a meter separates them - the water of one well is "sweet" (tastes cool and refreshing - in a word, tastes pleasant), the other "bitter" (has a decidedly unpleasant aftertaste), as the names so rightly indicate. Another seeming oddity is that although Sweet Well is only a few feet deep, its waters are inexhaustible; but of course these are spring-fed waters - in fact, during the Tang (CE 618-907) Dynasty, Emperor Xuanzong (his personal name was Li Long Ji, his long reign was from CE 712-756) christened this well as "Dragon Spring View".

Many of the evergreen trees - mainly the Chinese Red Pine, or Pinus tabuliformis- on Mt. Hengshan have craggy, grotesque shapes, though not all of them of course. Four of the most exquisite old specimens of Pinus tabuliformis on Mt. Hengshan stand straight and tall ("proudly and elegantly" some would say), their roots visible like claws gripping the rocky mountainside.

datong Datong Travel Guide - How to Plan a Trip to Datong