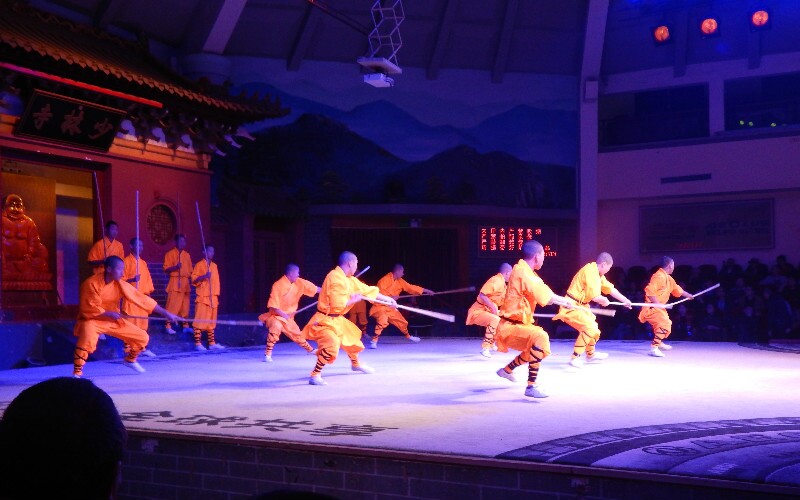 This magnificent and grand performance is created by many experts all over the world, which has rarely been seen so far. The background music made by the international musician, Tandun, is shocking and amazing with a strong ethnic feature. It is played by the Chinese National Symphony Orchestra and the Chinese Aiyue Orchestra.

The Chinese old-fashioned architectures on the mountain, such as the temples, bridges and the forest of pagodas are second to none of the temples on earth. The performers, wearing the traditional Chinese clothes, dance between the different sections of the stage, presenting a real experience of staying in an ancient temple and feeling the spirit of Zen.

The lights change according to the music and the development of the story, which is one of the highlights of this performance. The mountain, performers, buildings, forests, waterfalls and other lifelike decorations on the stage look fantastic and mysterious.

Under the fabulous accompaniments of the lights and music, the scenes of the four seasons on the stage change flexibly. The ancient temples in the snow at night, the streams and waterfalls, the moonlight on the forests and the thunder are all vivid.

In addition, you can see real Shaolin Kung Fu in this performance, such as the famous kids’ Kung Fu, Tai Chi. As a result, hundreds of monks sing, chant and pray under the instruction of the old abbot. You will be touched in this quiet and peaceful atmosphere and feel calm in your heart.

The story of this chapter originated from water. The shadow of Damo (the ancestor of Chinese Zen Buddhism) appears and the washerwoman steps out after the song to recite the Tang Dynasty's poems. The singing of Bodhi, the noise from the mountain after rain, and the conversation between the monks and the common people, all melt and combine in a good way.

The sound of the wooden temple blocks breaks the peace of the ancient temples, telling a story of the development process of the Shaolin martial arts monks. The shepherdess comes out drifting the flocks up the mountain. She brings the beauty of the common world to this pure Buddhist world.

The Wind Chapter starts the story with a long history. In this chapter, you can have a great feast for your eyes of Shaolin Kung Fu and the scenery on the lively stage and Mt. Songshan.

The performing effect of the lights shows perfectly in this chapter. The snow scenery of the mountain and the forest, and the shadow of the pagoda and the old monks, portrays a harmonious picture along with Zen stories for you.

The monks standing on the plum blossoms evoke a feeling of breaking life's limitations and becoming the elf between heaven and earth, flying to eternity. What's more, the auspicious lights express the compliments and praise to everything in the world.

This singing chapter brings this music ritual to its highlight. At the end of the performance, the light of Buddhism shines and everything turns harmonious and peaceful.