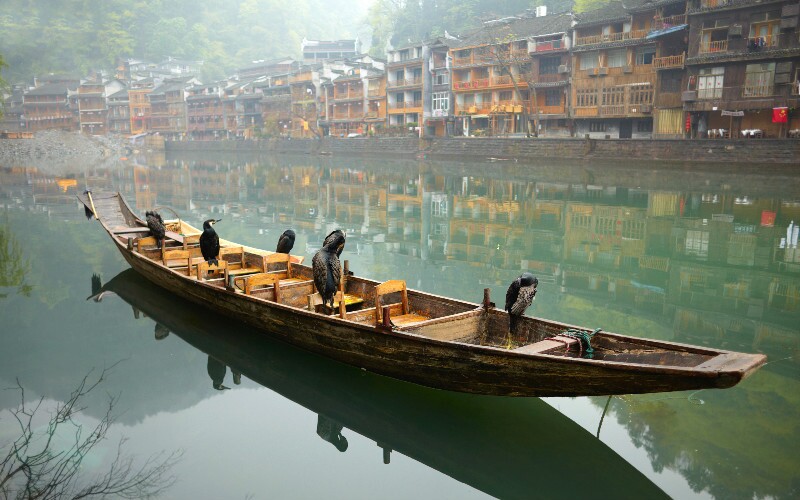 Tuo Jiang River is the Mother River of Fenghuang County, feeding the Fenghuang people from generations to generations. Women are usually seen washing their clothes by the river, wearing traditional Chinese leaf or bamboo hat. Men are fond of wearing ancient Chinese waistcoat, fishing in the river.

A glide on Tuo Jiang River in a Wupeng Boat (an ancient styled shed boat in strong Xiangxi flavor), listening to the folk labor song of the boatman, appreciating the hundred-year-long unique houses built on stilts along the riverbank is a impressive and peaceful experience.

As rowing ahead, passing through the Hong Bridge (an ancient Chinese bridge in Miao ethnic style), famous attractions of Fenghuang County are turning up one flowing another: Longevity Palace, Wanming Tower, Tuocui Building……

The ancient city wall along the south bank of the Tuo Jiang River is built by mauve stones and sands, which is elegant and marvelous. There are two ancient city towers in distinct Qing Dynasty style constructed at the east part and the north part of the city wall respectively.

The river water is limpid and shallow in the areas approaching to the city wall where float grass can be seen flickering in the green waves. Everything is in an air of leisure and tranquility. It is an ideal destination for relaxation and holiday-spending.