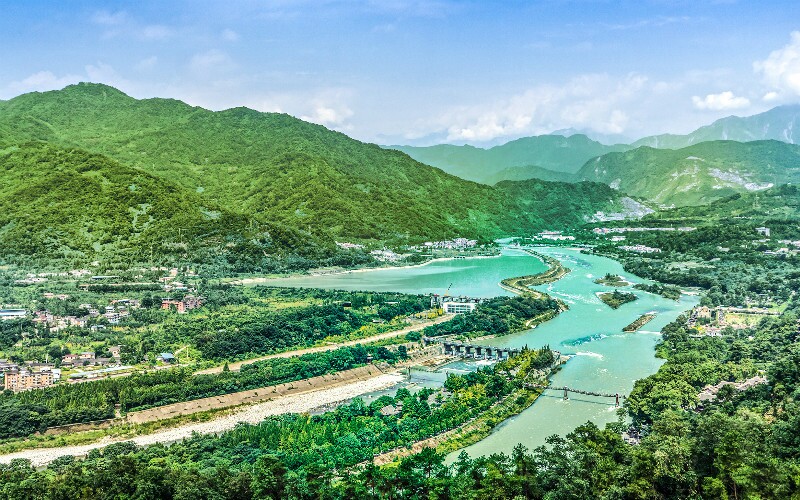 The Releasing Water Festival on Tomb Sweeping Day in Dujiangyan

The water releasing festival is a traditional folk custom festival in Dujiangyan City. It is annually held to commemorate the Dujiangyan Irrigation System's originators, Li Bing and his son, and to pray for good harvests on the Sichuan plain in the forthcoming year.

Mount Qingcheng and Dujiangyan Irrigation System was listed as a World Heritage Site in 2000.

An ancient ritual is held at the beginning of the festival. An orator reads an ode to ancestors county head Li Bing and his son, who planned and managed the project in 256 BC. A sacred dance with national dress from the Warring States Period (475–221 BC) is performed, and offerings are burned as gifts to the ancestors.

The sacrificial ritual reflects local people's admiration, praise, and esteem towards their forefathers, which are held to be great virtues by Chinese people.

The climax of the festival is the Water Releasing Ceremony, with a bamboo pole dance as the opening performance. After an official in an ancient costume, riding a horse, passes the message for the water releasing to begin, strong workers open the cofferdam to release the water.

The irrigation project at Dujiangyan is a good early example of man's engineering of natural resources to achieve beneficial results. It has benefited the local people for over 2,000 years.

The water releasing festival has a history of more than 1,000 years, and came from folklore and the old custom of thanking and honoring ancestors.

Bullet trains and buses run every hour from Chengdu to Dujiangyan, which takes only half an hour, and costs about 15 yuan.