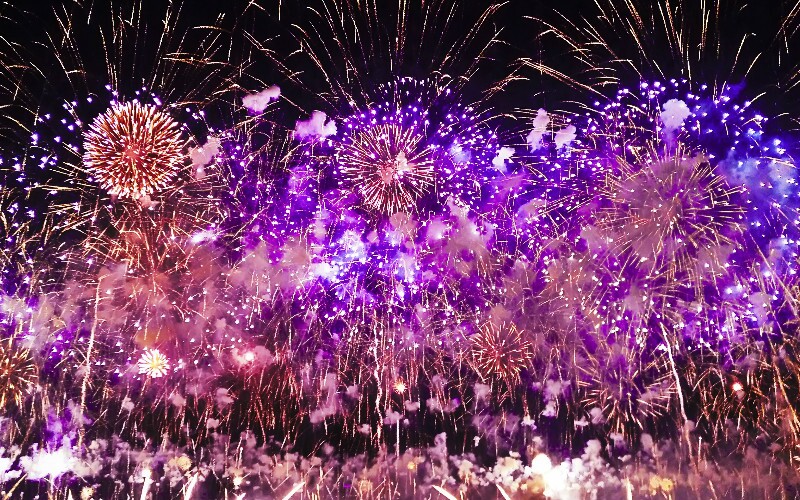 The Chinese New Year fireworks show is a big annual tourist event in Hong Kong. The fireworks are displayed in conjunction with the Symphony of Lights.

It is a main attraction to enjoy in Hong Kong on the second day of the three-day Spring Festival holidays. This year's 2022 event has officially been cancelled by the government.

Summary: Hong Kong remains a great travel destination this winter of 2020. It is much more affordable than in the past. However, it isn't as safe and convenient as in the past. For the last half-year, there have been massive demonstrations involving millions in the whole region.

The tourist crowds will be much lessoned this winter. Many of the traditional annual WinterFest events have been cancelled by the government including 2022's Chinese New Year fireworks and the parade in Tsim Sha Tsui.

Great bargains: If you do go to Hong Kong during this winter season, it may be the best time in decades for touring and shopping inexpensively and without the crowds of tourists! You can find great bargains on everything: hotel rooms (up to 60% off in Tsim Sha Tsui), discounted flights, fine dining at lower prices, and discounted shopping. See our WinterFest 2021/2022 travel information for travel updates and details, and as described below, Macau's Chinese New Year is a nearby alternative, so you can enjoy both regions.

Fireworks explode over Victoria Harbour on the day after the Chinese New Year day. It coincides with the record-setting Symphony of Lights. The harbor roars with a giant 25 minute fireworks display with lasers and choreographed building lights on the dozens of participating buildings.

You'll probably hear extra-loud booming detonations that are intended (according to Chinese tradition) to scare away the evil spirits from the whole area. This display is bigger and longer than the regular New Year's fireworks at midnight on January 1st.

In 2017, official estimates were that about 287,000 people braved the drizzly and foggy weather to watch.

Where/When to Watch the Fireworks

Bruce Lee statue on the Avenue of Stars

The Avenue of Stars is the best place to watch since you can also watch the Hong Kong Pulse laser show behind you. While there, you can see the handprints and statues that commemorate Hong Kong's actors. There are permanent viewing stands there from which you can hear the accompanying music and dialogue.

A long pedestrian promenade extends eastwards from the Avenue of Stars about one kilometer. This promenade gives a view of Victoria Peak and the stunning skyline of brightly lit skyscrapers on Hong Kong Island, but you can't see the 3D Pulse show from this vantage point.

Victoria Harbor blazes with fireworks, while the lights dance on the buildings.

Along with the promenade, you can join the crowds on Hong Kong Island. Golden Bauhinia Square in Wan Chai is a place to watch. It too is equipped with loudspeakers for narration and music. The IFC Tower is a good vantage point too.

Boats: There are also cruises scheduled for that hour. Perhaps you'll be able to enjoy the spectacular fireworks performance from a boat in Victoria Harbour as you float and dine below the extravaganza.

The fireworks are set aloft in conjunction with the regular Symphony of Lights with its colorful building lights and laser light show. In 2022, it is still the largest such building lighting event in the world. It is free holiday light show.

The skyscrapers go through their paces while the tens of thousands of spectators listen to the orchestrated music and narration played on loudspeakers for the event. The Hong Kong Cultural Center lights up with amazing computer generated graphics.

The best place to watch the light show is along the Avenue of Stars, or you could have a meal on a restaurant boat. Loudspeakers broadcast music and the accompanying narrative.

The Symphony of Lights is Newly Revamped/Modernized for 2022

New! Debuted for the Hong Kong Christmas season in December 2017, a whole new and much better Symphony of Lights display has been illuminating Victoria Harbor. It replaced the prior show that ran for 14 years and was a tourist favorite in itself.

A symphony by the Hong Kong Philharmonic is played along with narrative. With forested mountains as the backdrop and the expanse of the harbor as the stage, the best place to watch is from the Avenue of Stars.

Now a myriad of searchlights, lasers, LED screens and lighting illuminates this spectacle that transforms the HK skyline into an outdoor audio visual feast for the senses.

Along with the usual 40 or so buildings that usually participate, a lot more put up special Chinese New Year light displays to complement the visual effects of the architectural choreography.

The ICC Tower lighting effects are a part of the Symphony of Lights show.

A major exhibition for Chinese New Year is the exhibition of laser audiovisual display that dazzles the crowds in and around the plaza of the clock tower near the Star Ferry in Tsim Sha Tsui. The lasers are tuned for 3D projection, and they play up pictures that float on the walls of the Hong Kong Cultural Center and fly around the plaza.

It is astounding, but expect it to be crowded. It is much more popular than the regular Symphony of Lights. The Avenue of Stars near the Star Ferry is the best place to catch the 3D Pulse visuals and the fireworks.

Dining and Shopping Information for Before the Fireworks

The Lung King Heen's ethereal dining area during dinner is ideal for watching the harbor.

Gourmet dining: We recommend book early if you want to dine in the fine restaurants. Well situated Michelin-starred restaurants are in the IFC Tower such as the 3 Michelin Starred (2019) Lung King Heen.

Fine dining: Across the harbor in the huge Bay Harbor Mall that is only 100 meters away from the best vantage points in front of the Cultural Center are the non-starred but popular BLT Steak for American steak and the Dan Ryan for hamburgers.

Both the IFC and the Bay Harbour allow you to enjoy a fine dinner and are on-site, so you can go out and find good places to watch, beating the difficult crowds that usually start to converge and clog the roads two hours before midnight.

Snacks and street food: The Temple Street Market pedestrian street in Kowloon about a kilometer from the harbor is a place to browse for bargains and snack or have a meal beforehand. Before the parade, you could tour the area's attractions and shop and dine.

Shopping: Before the parade, you could tour the attractions and shop and dine. Hong Kong's biggest mall, Harbour City, is open along the parade route and so is iSquare that fills a skyscraper by Nathan Road.

Victoria Peak is another possible viewpoint for the fireworks.

The Spring Festival is the period of heaviest travel in China. The busiest travel days extend from a few days before the Chinese New Year until about 8 days afterwards. Expect higher prices and crowds in the mainland, but in Hong Kong, you'll find that prices are unusually low. It is a good time to shop for bargains as the stores try to reduce their stocks of unsold merchandise this winter.

Transportation: Buses 6 and 7 along Nathan Road are a quick way to get to the parade area in the Tsim Sha Tsui area. The MTR Tsim Sha Tsui Station has several exits along or near the parade route.

Weather: The weather in february is usually mild and warm or cool.

Get there early: With almost 300,000 people cramming into the small areas along the shoreline, it is important to get into a good position early, perhaps about 3 hours earlier. Otherwise, you'll find the trains and the streets too crowded and the roads and travel routes blocked off.

With our guides and drivers, you can relax and enjoy China.

We specialize in designing personalized tours. Let our regional experts guide you on a great Hong Kong tour, and they'll help you find the best events and things to do for you and enjoy the lower prices available in the region this year.

We can create your own Chinese New Year tour to visit the places you want in Hong Kong and China. All our tour plans can be customized.