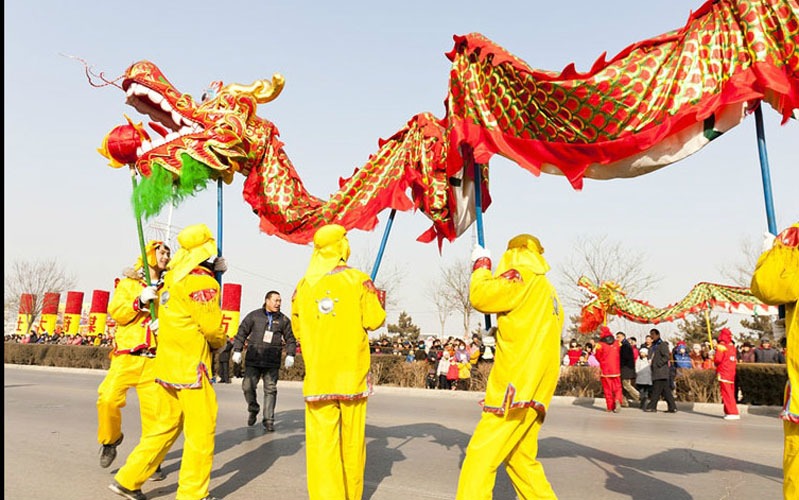 The Chinese New Year International Parade and Performances is one of the largest celebrations during the Chinese New Year in Hong Kong. On  Saturday, February 12, 2021, thousands of performers parade down the streets of Tsim Sha Tsui.

It is an entertainment extravaganza and a big part of the annual Chinese New Year celebrations in Hong Kong.

The Parade and Entertainment on New Year’s Day

Holiday Kickoff: The Tsim Sha Tsui streets hop to the beating music, and the crowds enjoy the parade.

On Chinese New Year's Day, crowds line the streets near Victoria Harbor. Dozens of floats proceed down the streets with dozens of performing groups and bands. Groups of professional performers and local talent skate, perform bike stunts, dance and do martial arts on the streets.

Of various nationalities, Hong Kong is an international city with influences from around the world, and the parade reflects that.

Program for the Parade The Avenue of Stars is a scenic pedestrian walkway on the harbor and has Bruce Lee's statue.

Route: Starting at the plaza of the Hong Kong Cultural Center near the Avenue of Stars in Tsim Sha Tsui, the procession goes down Canton Road, Haiphong Road, Nathan Road, and Salisbury Road.

The route goes by Hong Kong highlights such as the Avenue of Stars and Kowloon Park, and the parade proceeds down the Golden Mile of Nathan Road where it ends near the Museum of Art.

Pre-parade entertainment usually starts at 6:00 or 6:30. Entertainers entertain along the parade route. But the main parade begins at 8 pm. It's free to watch for free along the way. The Symphony of Lights at 8 pm coincides with the start of the parade.

The Symphony of Lights at 8pm: The parade begins in conjunction with the start of the nightly Symphony of Lights that still holds a world record for the largest such urban light display in 2019. The Avenue of Stars next to the Cultural Center is the best place to see the laser lights and the colorful lights of the buildings.

Grandstand seats: Usually about 3,000 seats are set up where the parade commences. Tickets for these seats are sold through tour agencies such as China Highlights, and about a week or two before, they are put on sale directly to the public. But they are snapped up by eager purchasers quickly within a few hours, so it is difficult for most visitors to get a ticket.

Ticket prices: The prices generally range from about 480 HKD to 300 HKD person. They stands open for spectators at about 7:00 pm. Ticket sales begin on Saturday, 26 January at the Hong Kong Tourism Board Visitor Centre at the Star Ferry Concourse in Tsim Sha Tsui (8 am to 8 pm daily). They are available on a first-come-first-served basis. Each visitor receives a numbered tag to purchase tickets at a designated time on the same day. Maximum four tickets per person, per transaction.

Transportation: Buses 6 and 7 along Nathan Road offer quick transport to the parade area in Tsim Sha Tsui. The MTR Tsim Sha Tsui Station has several exits along or near the parade route.

History of the Floats and Performances

Dozens of performing groups and bands participate every year.

In 2014, there were 35 or so floats of companies and associations from around the world, and they were preceded by groups of performers and entertainers of many nationalities.

In 2016, 13 floats representing 10 countries and regions were featured. There were also performing groups from countries including Germany, Japan, and the Philippines. Performing groups from Hong Kong participated with dragon dances, choreographic rope skipping and dance routines. It shows that Hong Kong is an international city with influences from all over the world.

In 2017, the parade showcased 10 lighted-up floats. It was scaled up to feature over 3,000 local and international performers. It was the largest number in the event's history. There were world-champion troupes from around the world such as the Taipei Cheerleading Association, the Carnaval de Colores from Spain, and the Bluecoats Drum and Bugle Corps from the US. The show was broadcast by satellite.

In 2018, there were 9 floats from the big local tourism/entertainment companies such as the Macau Tourism Board, the Hong Kong Tourism Board, Disneyland, and Ocean Park. Marching groups included Japanese jugglers, a Chinese acrobatic group, and a street circus from Holland.

Shopping and Dining Before the Parade 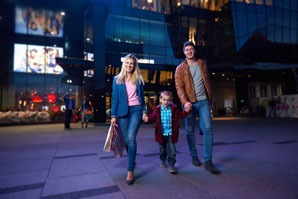 Before the parade, you could tour the attractions and shop and dine. Hong Kong's biggest mall, Harbour City, is open along the parade route and so is iSquare that fills a skyscraper by Nathan Road. Nathan Road is a popular shopping street.

The Temple Street Market pedestrian street is a place to browse for bargains and snack or have a meal beforehand. We could facilitate a tour the area's attractions and shopping and dining. Here are our recommended American Restaurants in the area.

High Travel Season: The Spring Festival is the period of heaviest travel in China. The busiest travel days extend from a few days before the Chinese New Year until about 8 days afterwards. Expect higher prices and crowds.

Weather: The weather in February is usually mild and warm or cool and comfortable.

Our company's specialty is designing individualized tours per our customers preferences.

Tour Hong Kong with our guide and private transport

Planning trip arrangements: We can book your 2019 tickets and reservations and save your valuable time. We provide guides, drivers, and private vehicles for great private tours for individuals and groups.

To create your dream trip: Make your own Chinese New Year tour to visit the places you want in Hong Kong and China.