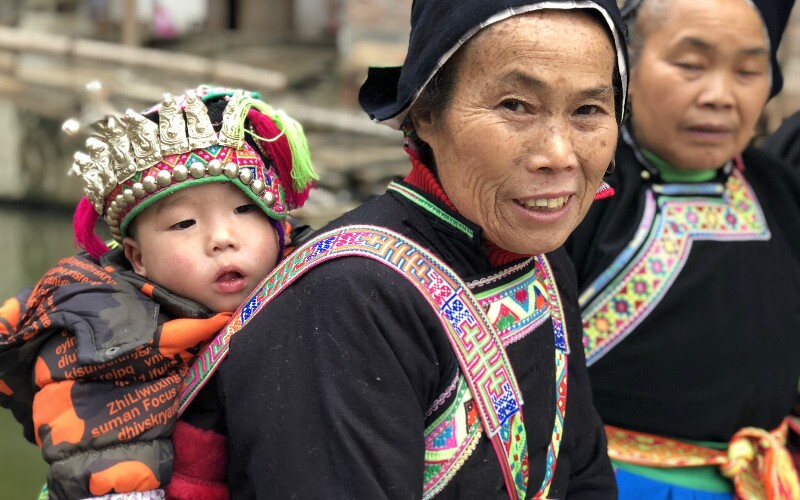 Many of the 70 Dong villages in the Miao & Dong Autonomous Prefecture in southeastern Guizhou used to hold bullfighting competitions in late January or early February and late August or early September each year. The festivals were traditionally held twice a year. The dates depended on the ‘hai' days of the lunar calendar. They are still sometimes convened today.

The specially trained and groomed bulls don't take part in farm work generally, but they are pampered and fed special food like honey. Dong people in southeastern Guizhou love the bullfights. They can be gory. And bullfights used to play a part in many of their other traditional festivals. But two days each year were specially set aside for bullfights. The fights and festivals may interest many travelers.

A “king bull” is bred, fed and pampered to grow big and fierce. The bull pen of the king bull is usually found near the village drum tower. (Every Dong village in southeastern Guizhou has a drum tower that serves as a meeting place.) Village residents supply the animal with herbs, fodder, water, and sometimes even wine and honey. The idea is to make the animal big. Its horns are allowed to grow out and they may be sharpened for the fight.

The ceremony begins when young men leave their village playing their lusheng flutes. The Dong people are noted for their musical ability and choirs. The UNESCO World Heritage Organization lists Dong choirs and their complex choir music as an intangible world heritage. The young men go to other villages to challenge them to a bullfight. Then they return to their own king bull pen and play their flutes in front of it. This is intended to enrage the bulls and make them variously aggressive or nervous. Then the bulls are led to a bullfighting arena where they are marched around on display.

Harnesses are put on the bulls to control them. Banners and feathers are also planted on them. This resembles how Spanish bull-fighters plant colored barbs on bulls to enrage them. Then people light fires and throw them in front of the bulls. This probably really scares the bulls. People beat drums and gongs to further frighten the bulls, and then they are let loose. The bulls run at each other and begin fighting. The one left alive – or the one that doesn't run away – is the winner. If there is no winner, then the bulls' legs are tied up.

It is interesting that this ceremony also provides an opportunity for young people to meet each other. The girls from the winning village are allowed to go and take a banner off the dead animal. In order to retrieve the banner, the young men from the losing village must make a feast using the meat of the dead bull and invite the young women to attend. The men sing for the girls, and the girls return the men's village banner. So some of the girls from the winning village receive a good meal, are treated to a choral concert and have the opportunity to meet the young men from the losing village.