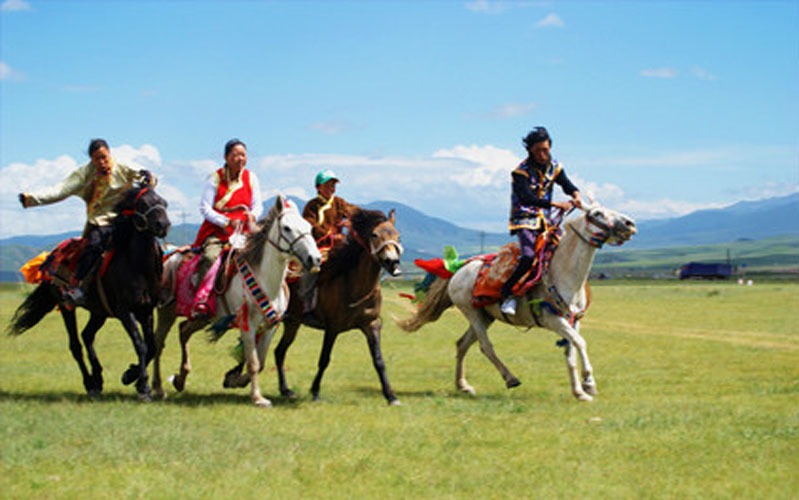 As a legal holiday and the most ceremonious traditional folk festival for the ethnic people living in Diqing, Shangri-la Horse Race Festival is held during the 5th Chinese  lunar month each year, the same day as the Dragon Boat Festival, during which different ethnic groups get-together in Caodian, at the foot of the Five Phoenix Mountain, east suburb of Shangri-la. As a grand rally for the Tibetans, Shangri-la Horse Race Festival usually lasts for three days, which has developed into a national sporting competition and a commodity fair now.

Highlights of the Festival

Besides the traditional equestrian performance, a number of interesting entertaining and recreational activities are held at the foot of the Five Phoenix Mountain during Shangri-la Horse Race Festival, including horse racing, wresting, tug-of-war, yak racing, ox-drawn bars, and people from the neighboring countries such as Kangmang, Xiangcheng, Daocheng, Litang, Batang and Derong also participate in the festival. Now Caodian has become the largest sports center in the Tibetan Community of Yunnan Province now, where the opening ceremony is held in the morning of the first day of the festival, followed by various kinds of activities.

All the family members of Shangri-la will set up tents on the mountain for a picnic during the festival, when the colorful flags set off one another, adding much luster to the festival.

As a matter of fact, a number of art performances such as love song-singing competition and folk fashion show are also held during the festival, and the commodity fair is another highlight, so visitors can appreciate and purchase special commodities that they have never seen in the fair. Shangri-la Horse Race Festival also provides an ideal opportunity for the youth to seek their partners.

Legends of the Festival

The legend went that the Jiantang tribe (a tribe of the ancient Qiang ethnic group) established the Jiantang Kingdom during the Spring and Autumn Period (770 B.C. -476 B.C.) and the Warring States Period (475 B.C. -221 B.C.). The cavalrymen of the Jiantang Kingdom practiced thier riding skills each 5th of May, making it a professional horse-training center then.

According historical records, the Tibetan army invaded the Jiantang Kingdom and defeated it during the early Tang Dynasty (618-907), making it a part of Tibet. The Tibetan army stationed on the vast Jiantang Grassland were skilled in riding and shooting, and a grand military review ceremony was held by Tibet kings during spring, during which various ethnic groups rushed to watch it or just went for a walk on the grassland.

During the Qing Dynasty (1644 -1911), a small army also stationed on Jiantang Grassland, and the horse race competition was held on 5th of May each year, which has become the present Shangri-la Horse Race Festival during the course of time.

Address: Caoding, at the foot of the Five Phoenix Mountain, Shangri-la, Yunnan Province

Transport: the bus from Shangri-la bus station will take you there during the festival

Visitors are much crowed during the festival, therefore, you are highly to book a group tour for the festival, and China Highlights can customize one for you and ensure that you journey safe and smooth. After the festival, you are also recommended to visit noted scenic spots of Shangri-la, including Songzanlin Lamasery, Bita Lake, Napa Lake, Baishuitai, Nixi Black Pottery Village, Meili Snow Mountain, White Horse Snow Mountain and Haba Snow Mountain.