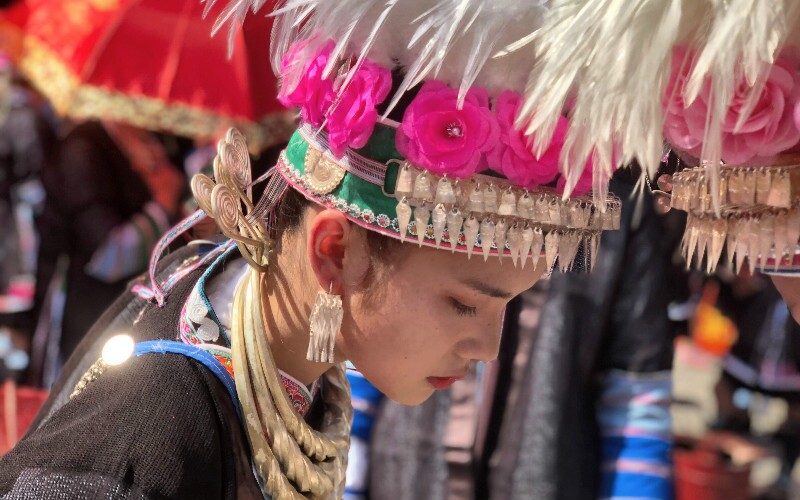 The New Year Festival of the Dong Ethnic People Dong New Year is a traditional festival of the Dong people in Southeast Guizhou Province. It is celebrated at different times of year from one area to another, mostly falling during the first days of the eleventh month of the Chinese lunar calendar. Some Dong people celebrate it at the end of the tenth month. In 2016, the Done New Year will be celebrated on Dec. 1st, at Zhaoxing County, Qiandongnan prefecture, Guizhou Province.

Before Dong New Year, the Dong people are very busy preparing. They clean their houses, make rice cakes, and slaughter animals, and they also make sacrifices to their ancestors, while burning joss sticks and candles.

During the festival, Dong people wear traditional costumes and invite their honored guests to a feast. They also send various kinds of food to their friends and relatives, including pickled vegetables, frozen fish, and ziba (cakes made from cooked glutinous rice pounded into paste). Normally recipients of ziba return an equivalent amount to the senders during the Festival. This is called 'returning ziba' by locals.

A number of performances are held during Dong New Year. Highlights are playing of the lusheng (a wind instrument made from bamboo) and buffalo fighting, both attracting large crowds.

Young Dong couples in Qiandongnan prefecture make full use of the festival to convene their wedding ceremonies. They invite friends and relatives, adding much luster to the festival.

The Origin of Dong New Year

A local legend about the origin of Dong New Year goes like this:

There was an old chieftain who enjoyed great prestige and commanded universal respect among the Dong people. He refused to pay tribute to the Han emperor, and this led to war between the Han and the Dong.

When Dong villagers were finally surrounded by the Han army, the old chieftain stepped forward and gave himself up to protect the lives of the villagers. He was arrested and exiled to guard the frontier.

Ten years later, the chieftain was allowed to return to his hometown, and he arrived on the 30th of the tenth month. All the villagers beat drums and gongs and gathered together to meet him, and they declared that day New Year's Day for the Dong, in honor of his return. Dong New Year was initially celebrated among the Dong of Liping County, Rongjiang County, and Congjiang County, but has now spread to all Dong people.

See Dong New Year for Yourself

Dong New Year  is a good time to visit Dong areas. China Highlights can make a private tour based on your requirements to visit the Dong people, or we can customize one of our Guizhou tours.