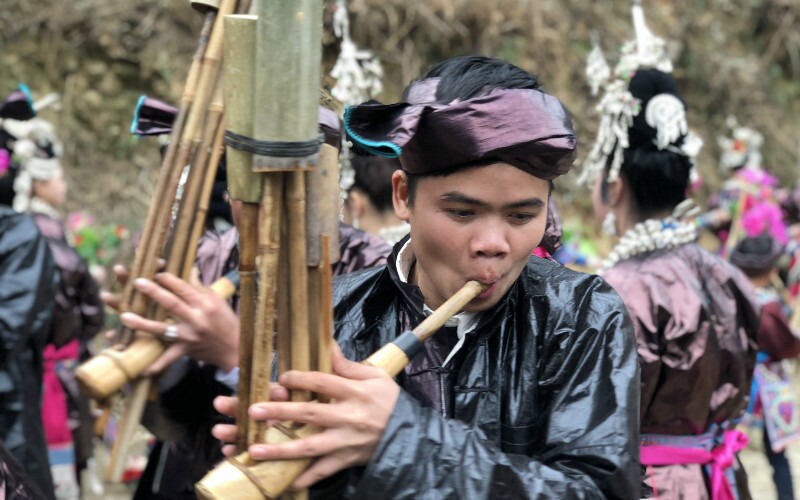 The Miao people are playing Lushengs in the Lusheng Festival.

The Lusheng Festival is the most influential festival of the Miao community. It is popular throughout Guizhou, Yunnan, and Sichuan Provinces. The Lusheng Festival in Kaili, Guizhou is the most famous and grand of the bunch. It begins on the 16th day of the first lunar month, and climaxes on the 19th and 20th days .The festival features a lot of Miao ethnic activities, such as singing, bullfighting, horse racing, and dancing to the rhythm of the Lusheng.

If you plan to visit Guizhou in March, you can experience the Lusheng Festival which is held in Zhouxi Town (about 16 kilometers from Kaili City).

If you plan to visit Guizhou in November, you also can experience the Lusheng Festival which is held around November in Huangping County (about 75 kilometers from Kaili City).

All the Miao people come together from different villages. The girls dress up in their best traditional costume and silver headdresses, while the boys carry their lusheng and head to the Lusheng Stadium to celebrate the festival. They circle in rings as the girls dance to the rhythm of the music provided by the boys. The ceremony is performed to bring hope for a favorable harvest in the coming year alongside good health. It is also a chance for the youth to express their admiration and love towards one another. The miao girls dress up in their best traditional costume and silver headdresses in the Lusheng Festival.

A lusheng is a reed instrument. It is made of bamboo and can measure up to 3 meters or as little as 1/3 meter. Most lusheng consist of multiple reeds, but some have only 1 or 2 reeds. The most popular number of reeds for a lusheng among experienced lusheng musicians is 6, which provides an adequate range of tones, from a deep bass to a clear and melodious treble, while maintaining forcefulness. The music of the lusheng has over time been played for more than just the traditional courtship ceremony – the lusheng has developed into an all-purpose musical instrument in its own right, an instrument used to accompany all manner of dance, acrobatics, and even Wushu, a special aerobics-like Chinese form of physical workout. Because of its versatility, the lusheng is gradually being adopted by other Chinese minority cultures than the Miao, such as those of the Buyi, the Dong, the Shui, the Yao and the Yi, and it is perhaps only a matter of time before it makes its way into Western culture. View China's famous ethnic festivals