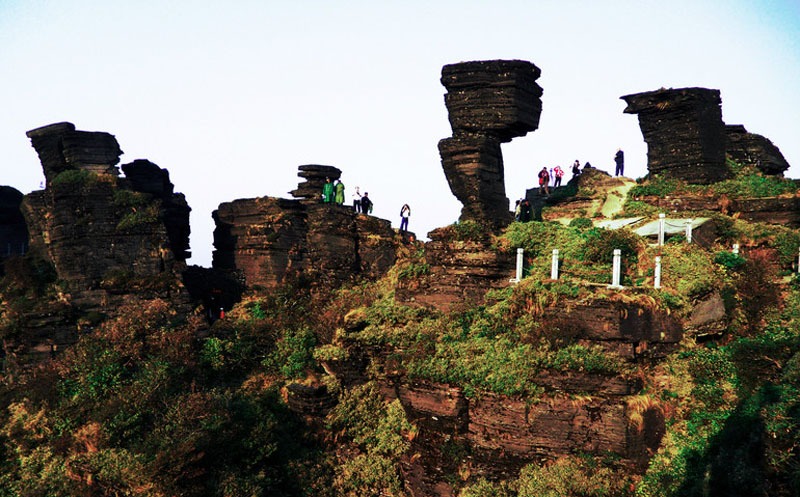 Tongren Shaman Festival is celebrated by the Tibetan and Tu ethnic minorities in the villages of Tongren County in western China's Qinghai Province, located about two hours' drive from Xining, the capital of the province. It is a grand and festive occasion for local people to show their devotion and gratitude to the Mountain God.

The Tibetan and Tu ethnic minorities in Tongren County worship the Mountain God as the immortal who protects them. The belief is believed to date back to the ancient worship of totems in the pre-civilization era of this part of China.During the festival, the villagers dress up in their holiday best. Females are done up in ornate, dazzlingly embroidered holiday costumes, which are adorned with gems. They assemble at the Temple of the Mountain God, singing and dancing to entertain the Mountain God.

Of all the activities of the festival, the most amazing, if not shocking, practices are the Shangkouqian, Shangbeiqian and Kaishan rituals. They are each conducted by the shaman, or wizard, who also presides over the festival.Shangkouqian means to pierce steel needles through the mouth. The process involved in Shangkouqian goes as follows: the shaman, on behalf of the Mountain God, pierces one or two steel needles about 25cm long，which somewhat resemble trussing needles，horizontally into either cheek. They generally pierce both cheeks on the same level of the mouth. This unusual and somewhat morbid, to an outsider, practice is believed to prevent diseases from entering the mouth. A few minutes later, the shaman pulls out the needles and blows on the "wounds" made by the needle points as a symbolic act of healing the punctured flesh. The unusual practice is not a sight for the faint-hearted to witness, yet the young males who submit themselves to being pierced in this way do so eagerly. Throughout the ritual (up to four needles may be inserted in the cheeks, two from either side of the face), the participants show no signs of suffering pain, but remain calm and collected. Surprisingly, no blood seeps from the "wounds" thus created.

Shangbeiqian is quite similar to shangkouqian, except that it is even more incredible: a bundle of twenty or so long needles are inserted into the male dancers' backs. Again, though onlookers unfamiliar with the ritual may shrink in horror, the participants consider it an honor and a privilege to practice their ancient religion in this way.

This ritual is performed exclusively by the male dancers during the Tongren Shaman Festival. This somewhat bizarre form of "acupuncture" is believed to impart strength to those who practice it, and the dancers continue their dance ecstatically, seemingly feeling no pain.The third ritual, Kaishan, marks the end and also the climax of the festival. Kaishan means "to cut an opening". At the end of all the celebrations, the shaman makes a slit into his forehead with a knife, and uses his own blood as a sacrifice to the Mountain God.These ancient traditions, perhaps not unlike the rather morbid to onlookers, Christian practice of self-flagellation in certain parts of the world, are performed in a spirit of piousness and reverence toward the "patron saint" of the Tibetan and Tu peoples, the Mountain God.China Highlights' 5 Days Tongren Shaman’s Festival Tour gives travelers an opportunity to celebrate Shaman Festival with the local ethnic people.