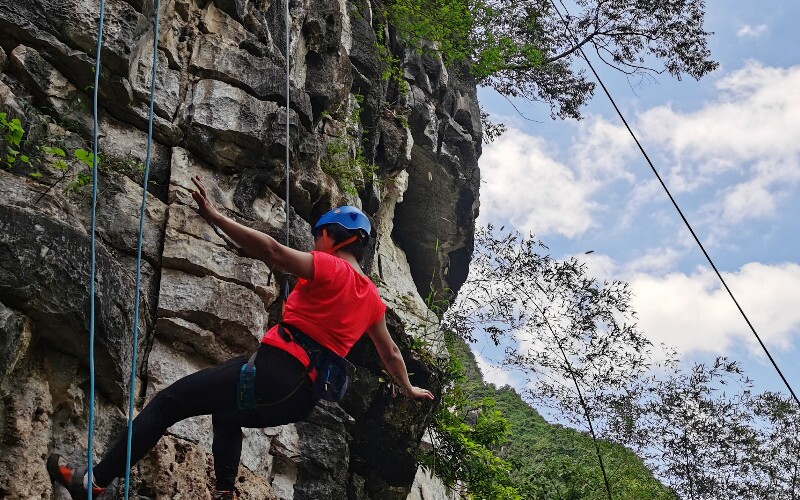 The Yangshuo Climbing Festival is held annually on a weekend in August/September/October/November (TBA, 2020). Hundreds of people from all over the world are attracted by the festival because Yangshuo boasts a famous and well-exploited karst landscape, and is considered as China's number one "paradise for climbing".

The admission fee is 99 yuan for beginners this year [2018]. Registration is from September 20th. Half of the admission fee goes to the Yangshuo climbing fund for bolting new routes and route maintenance.

China Highlights offers a free registration service. We also offer climbing festival activities and  a tour package with discounted hotel, air tickets, guide and driver service. If you have any questions about the festival or want to book a tour including climbing, please contact us. Festival participants will receive a gift package with T-shirt and some other goodies from festival sponsors. For more information, please visit http://rockclimbing.cn/. Alex (何凌轩 He Lingxuan /her ling-sshwen/) was born in Guilin in 1981. He started to learn climbing from a Canadian in 2001, and took part in the China Climbing Championship in the following year. He bolted some routes in Yangshuo with foreign climbers and reached the grade of 5.13. His climbing outfit was established in 2002 and organized the first Yangshuo Climbing Festival in 2008.

As an expert, Alex got authorization from UIAA (Union International Alpine Associations). On May 18th, 2003, French "Spiderman" Jean-Michel Casanova climbed the Bailong Elevator in Zhangjiajie with no help from any machinery, safety net, or safety equipment. Alex was invited to design a rescue plan for the crag, and commentated on a live TV show. Two of the Most Famous Previous Competitors "I started climbing when I was 10 years old, and ever since that very first time my life has never been the same. For me, climbing is more than just a pastime activity; climbing is my life. In the last 18 years I have represented Australia proudly 17 times and have completed some of the world’s hardest boulder problems, including making the first ascent of The Wheel Of Life Direct V16." - Self Intro (2013).