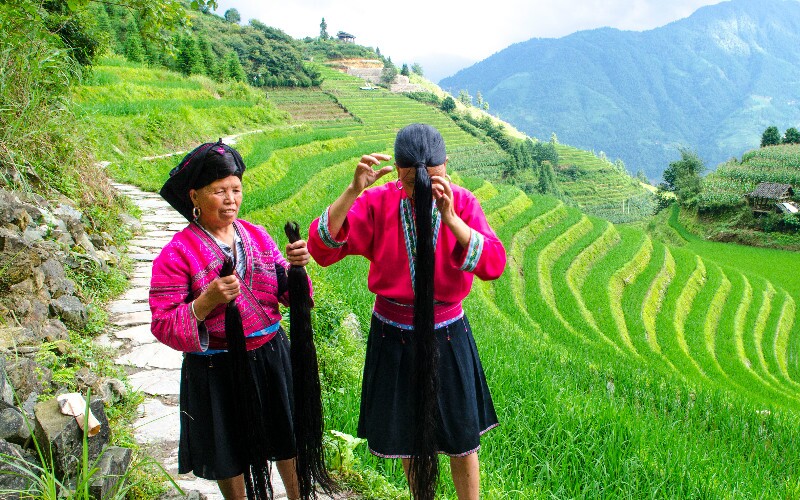 As a unique ethnic group in Longsheng, Guilin, Guangxi Province, the Yao ethnic group celebrate their Red Clothe Festival every year, which has progressed for a long history successfully since Yuan Dynasty.

The Yao girls prefer wearing their self-made red clothes during the festival, hence the name of Red Clothe Yao Ethnic Group, what’s more, and Yao girls are fond of folding their black long hair throughout their whole life. It's a custom for Longshen Yao ethnic people to get together for celebrating their yearly festival in Zaina or at the foot of Longji Mountain, during which they dress in their best clothe and take their specialties to the market for sale.

The Yao ethnic people are good at singing and dancing, and a number of folk sports activities are held during the festival, including long-drum dance, selection of village beauty, long-hair competition, tug-of-war and bamboo butting, through which the Yao ethnic people better know one another.

For the single men and women in Longsheng, Red Clothe Festival functions as Valentines’ Day, which is an opportunity for them to find their future wives or husbands by playing harmonica and singing in an antiphonal style, and they will go hand in hand into the river for romance if they are content with one another.

With the development of local tourism in Longshen, Red Clothe Festival has become a window for Longshen to communicate with outside world, which serves not only as a happy day for Yao people, but also for Miao, Dong, Zhuang and other ethnic minorities.