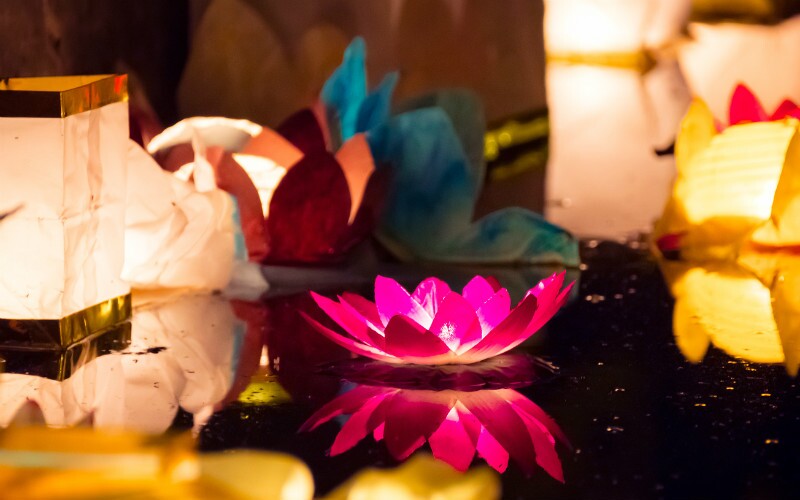 Themed as "River Lanterns Sending Best Wishes and Mountain Songs Expressing Harmony" and held by the shore of Zijiang River, the Ziyuan Traditional Ethnic River Lantern Song Festival aims at "carrying forward folk culture and enriching Ziyuan tourism culture" in an entertaining way, during which time a number of tourist activities are launched to suit the tastes of all visitors.

Highlights of the Festival

Ziyuan Traditional Ethnic River Lantern Song Festival is an ideal opportunity for visitors to experience the unique Miao and Yao ethnic cultures, art and natural scenery. The highlights include the Miao and Yao Ethnic Art Performance, the Sacrifice and Praying Ceremony, the Mountain Song Challenge Tournament, Laowumen Football Match, Karaoke, the Painting and Calligraphy Exhibition, and the Photographic Exhibition, which greatly enrich the cultural life of Ziyuan’s locals.

In addition, the elegant poem recitation and the dynamic Latin dancing performance are also available during the festival, which represent a perfect combination of Ziyuan traditional folk customs with modern civilization, impressing visitors from all corners of the world with the unique charm of Ziyuan.

People travel to the Zijiang River one after another after the festival, placing thousands of lit lanterns in the river to express their best wishes for a happy life. A number of chickens, goats and fishes are also thrown into the river, which is also a traditional custom of the locals to express their joy and happiness. A myriad of twinkling lights along the river set off the colorful lanterns, which is rather spectacular if seen from the banks of the river.

Background Information About the Festival

Initially known as the Mid-July Lantern Festival or the Mid-July Mountain Song Festival, the Ziyuan Traditional Ethnic River Lantern Song Festival originated from Hepu Street, Ziyuan County. The Zijiang River has been an important watercourse linking Hunan Province and Guangxi Province since ancient times, and Hepu Street served as a meeting venue for the merchants between Hunan Province and Guangxi Province.

The Ghost Festival spread to Hepu Street due to the introduction of Buddhism during the Tang (618–907) and the Song (960–1297) dynasties, which was held to redeem lost souls by making offerings and saying prayers on the 15th day of the seventh Chinese lunar month, and lotus-shaped lanterns were thrown into the river for praying. Hepu Street Commercial Club has held the Lantern Festival every year since the Qing Dynasty (1644–1911), and the locals express their endless yearning for their ancestors by putting lit lanterns into the river. The custom has been passed down from one generation to another, and the locals still celebrate it by the river during the night of the 14th day of the seventh Chinese lunar month each year.

The Mountain Festival originated from Yanzhu Village, Ziyuan County, where the Miao and the Yao people live harmoniously with the Han ethnic people. The legend goes that the entire Yang family of the Miao ethnic people uprooted themselves and settled in Yanzhu Village, cultivating the wild area and becoming the ancestors of the inhabitants of Yangzhou Village.

It is a custom for the villagers to sing mountain songs to commemorate their ancestors during the 15th day of the seventh Chinese lunar month each year, joined by the people from the neighboring villages. This tradition eventually evolved into the Ziyuan Traditional Ethnic River Lantern Song Festival.

For visitors who are planning a trip to Ziyuan, you are also highly recommended to visit the famous scenic spots in Guilin, such as the Reed Flute Cave, the Crown Rock and the Li River. China Highlights can offer the best itinerary for you due to our professional design of Guilin tours and China tours.

Transportation: A sightseeing bus available at Guilin Bus Station can take you to Ziyuan Bus Station, and then take a taxi or motorcycle to the Zijiang River.