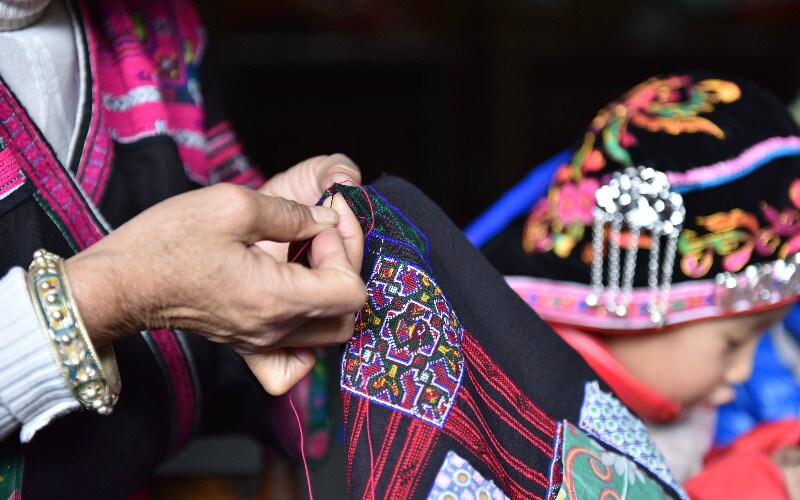 Traditional Arts and Crafts of Guangxi

Guangxi is a unified multi-ethnic region inhabited by over 50 nationalities. The ethnic groups living in Guangxi produce numerous handicrafts which show the unique characteristics of the minority ethnic groups. Special artworks include: Zhuang Brocade, Embroidery Balls, Miao Silver Ornaments and Batik. All in all, Guangxi is not only a tourist destination of minority folkways, but is also a shoppers’ paradise for unusual souvenirs.

Zhuang brocade, created by the dexterous Zhuang ethnic group in Guangxi, is one of the famous traditional Chinese folk-custom crafts. This splendid handicraft is woven in beautiful designs with natural cotton warp and dyed weft, and is believed to have originated in the Tang Dynasty (618-907 AD).

During the Song Period, the weaving techniques of Zhuang brocade had been greatly improved. The Zhuang weavers began to use five-color gloss to make the brocade and embroider flowers and birds onto them. Zhuang brocade reached its peak in the Ming Dynasty (1368-1644 AD) when it was presented to the imperial court as tributes. In the domain of textiles, Zhuang brocade stands out for its durability, exquisite designs and intricate patterns.

Common Zhuang brocade patterns which we often see include: squares, waves, clouds and circles. There are also some intricate patterns such as phoenixes among peonies, lions playing with balls, butterflies courting flowers and carps jumping over dragon doors. The brocade, with delicate designs and bright colors, has a great practical value. It is excellent for making carpets, tablecloths, scarves, aprons and handbags.

There are plenty of places to buy Zhuang brocade in Guangxi. These wonderful handicrafts are sold in the shops in tourist attractions, night markets and Yangshuo West Street. Scarves and handbags are the most common products sold in the market and the price depends on the size, quality and complexity. Normally a handmade scarf costs from 50 to 200 RMB while a handbag costs from 100 to 500 RMB.

Being the token of love between young men and women, as well as the mascot of the Zhuang nationality, the embroidery ball is a very unique tourist handicraft of Guangxi. The embroidery ball is made of silk cloth which mainly has three types of background colors: red, yellow and green. The ball’s pattern indicates the connection of twelve petals; each petal represents one month in a year and has a mascot on it. A mascot could be a plum blossom, orchid, bamboo, swallow, dragon or phoenix. All of these symbols represent reunion and eternal happiness. In order to make the ball weightier, beans, millet, cotton seed or corn seed are wrapped inside the ball. These cereal seeds have a profound meaning in that this year would have “bumper crops”.

As a love gift, throwing an embroidery ball is a traditional game of the Zhuangs. During the time of the Spring Festival and the Zhuang Nationality Song Festival, the youth of the Zhuangs will invite each other to the village side or the bank of the river. They will then divide themselves into male and the female sides. Before the girls throw their embroidery balls to the boys, they would like to get some general information about the boys through singing antiphonal songs. Normally the girls sing the songs with questions in the lyrics first, and then the boys sing back with answers. When they sing at the most exciting moment, the girls begin to throw their balls to the boys whom they set their minds on. The boys are supposed to have a quick reaction and catch the balls correctly. After a few times, if the boys have also set their minds on the girls, they will tie their gifts, such as silver ornaments or coins, to the balls and throw them back to the girls. If the girl accepts the gift, it means the girl agrees to have a date with the boy after the game.

In recent years, throwing embroidery balls is still a popular game among the Zhuangs. The fine embroidered ball as a souvenir can be found anywhere in the Zhuang area and you can get a nice one within 30 RMB from the stalls.

It’s fair to say that there is no group of people in China who knows silver better than the Miaos. Silver accessories have been a part of the Miao culture for over 400 years. It’s a custom for Miao ladies to decorate themselves with silver ornaments for festivals and celebrations. A lady’s full set of silver ornaments can weigh up to 15 kilograms, the more and heavier the better. The purpose of wearing silver jewelry is primarily for aesthetic appreciation, but they are also worn as amulets to ward off evil spirits and as symbols of wealth.

Considering the great demand as well as the lack of silver in the Miao regions, the government allocates special silver resources to the Miao communities with a very preferential price. The metals for making Miao silver ornaments are not pure silver. Normally it features 60 percent of pure silver and is combined with white copper and nickel. Most of the processes in making silver ornaments are done by hand in a traditional way. In some Miao villages, all males are trained in the art of silver making with the skills that have been passed on through generations. The silver ornaments they make usually include silver crowns, hairpins, earrings, necklaces and bracelets. In order to get the real Miao silver, regular Miao silver shops are better choices to buy the silver ornaments from. The value of Miao silver is approximately 15-20 RMB per gram despite the processing charge.

The silver jewelries made by the Miao people are highly regarded as some of the most finely detailed and wonderful metalworks in China. The Miao villages in Guangxi are definitely the right places for you to experience the Miaos’ silver culture.

Miao Batik, also known as wax-resist dyeing, is a form of dyeing or printing folk art which involves creating different shapes through applying hot beeswax to fabrics. It used to be a famous tribute offered to the imperial court. According to the customs of the Miao, all women should learn batik-dyeing. Many girls learn this workmanship from their mothers from a young age and hand it down through the generations.

Generally, the fabrics for batik are white cotton cloths, and sometimes silk cotton or poplin are also used. Beeswax is the main resistant material which does not dissolve in water but can be melted when heated. The working process of batik is as follows: first, melt the beeswax in a metal pot on the hot ash until it becomes liquid. Then use a specially designed knife as the painting tool and stipple the beeswax onto the cloth. After that, soak the waxed cloth in warm water, and then put it into the indigo vat. Repeat this several times to make sure that the cloth is thoroughly dyed. Before the last process, wash the colored cloth in the river and place it in boiling water to remove the remaining wax. Finally, rinse the cloth with clean water to uncover the pretty blue and white patterns and a fabulous batik artwork has been created. The main batik created by the Miao people includes women’s dresses, bedsheets, tablecloths, scarves, bags and other distinctive textiles. Among them, tablecloths are the most popular souvenirs sold in every batik shop and the reasonable price for a tablecloth is about 200 RMB.

Regarded as the foundation of the ancient Chinese dyeing art, Miao Batik is recognized as one of the most important traditional Chinese folk arts. Its designs and techniques have influenced many fabric arts today and will continue to be respected.