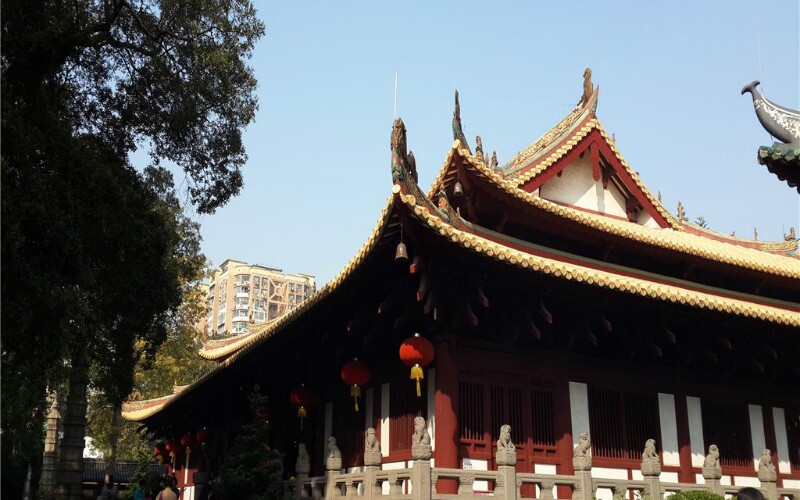 It was originally built as the residence of Zhao Jiande, an offspring of Zhao Tuo, the Nanyue King in the Western Han Dynasty. In the period of the Three Kingdoms, Yu Fan, a lord in the Wu State, when he was relegated to the Southern Sea, he gave lectures here and hence the Guangxiao Temple was called "Yu Yuan" at that time. The temple was also called "He Lin" because of a great many myrobalam trees there. After Yu Fan's death, his family denoted the residence as a temple and made a slab saying "Zhizhi", and that was the very beginning of the Guangxiao Temple. Bright Filial Piety Temple has a long history and therefore there are a lot of antiques. The Grief Bell which was first set up in the 2nd year of Baoli in the Tang Dynasty (826 A. D.) is in the shape of mushroom and is made of stone with Hercules' embossments around. Those embossments are vivid in facial expressions and well shaped and elegant in postures so that they completely represent the soul of Buddhism. 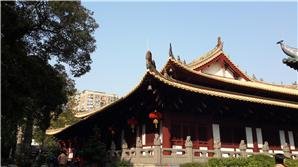 There is a drum for the prayer meeting festival on the top of the drum tower and it corresponds to and chimes in the bell. Whenever there is a solemn prayer meeting festival, the bell and the drum will ring at the same time and the atmosphere is so dignified that visitors will be totally lost in the situation. The Grand Hall which was built in the Eastern Jin Period is stately and shows the profound details of Buddhism in Guangxiao Temple in terms of its constant play of musical stones and cymbals. Besides, inside the temple there are washing bowl spring carved by dharma in the Southern Dynasty, stone bell of the Tang Dynasty, the iron tower with thousands of Buddha.