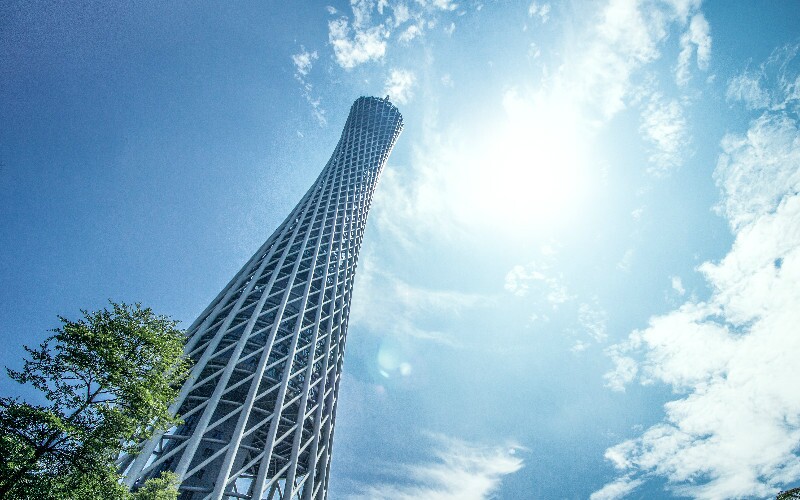 The Canton Tower (also know as Guangzhou TV & Sightseeing Tower), the landmark of Guangzhou City, is one of the world's most spectacular new buildings. It serves not only as a popular tourist destination but also as an intensive facility for radio and television transmission. On the 450-meter-high (1476-feet high) rooftop of Canton Tower, visitors can take the world’s highest horizontal Ferris wheel to take the panoramic views of Guangzhou. The track is constructed around the periphery of the roof, with 16 transparent cars seating 4-6 people in each. It takes 20 minutes for the cars to circumnavigate the track. The wheel operates from 17:00-22:00 daily, and the price is 130 yuan per person (admission fee of Canton Tower is NOT included).

The Canton Tower or Canton Tower (also known as the "Supermodel") is a radio and TV tower near Chigang Pagoda (赤岗塔), Haizhu District, Guangzhou, and 125 meters (410 ft) away from the north shore of the Pearl River. It faces the Haixin Sha Island and Pearl River New City with Guangzhou 21st century CBD District across the river. It was finished in 2009 and became operational on September 29, 2010 for the 2010 Asian Games.

The nickname Xiao Man's Waist (means slender waist. Xiao Man a famous geisha in the Tang Dynasty (618AD-907AD), who had a very beautiful slender waist.) comes from the innovative design of the tower. While most skyscrapers bear "male" features; being extrovert, strong, straight, rectangular, and based on repetition, the architects wanted to create a "female" tower, being complex, transparent, curvy and gracious. Their aim was to design a free-form tower with a rich and human-like identity that would represent Guangzhou as a dynamic and exciting city. The result is the tower, very slender and tall, that bears similarities with the figure of a female. The narrowest part of tower, the waist, is the 66th floor, with a diameter of only 30 meters (98 ft). The 610-meter tower features a tapering silhouette and is designed to house TV and radio transmission facilities, observatory decks, revolving restaurants, exhibition space, conference rooms, shops and 4D cinemas. Information Based Architecture has created the shape by a rotation between lower and upper level floor plates, characterized by a twist and narrowing elliptical waist of less than 27 meters (87 ft). The main design emphasis was to offer outdoor and physical experience for visitors. There are outdoor gardens set within the structure, and a large open-air observation landscape opens up magnificent views over the city. It is not only the tallest TV tower in Asia, but also one of the most beautiful structures providing transmission services for the Sixteenth Asian Games. The new landmark opened officially on 10.1, 2010.

The tourists can enjoy an unobstructed view of Guangzhou City. Standing upon the tower, tourists can have a bird's-eye view of the beautiful scenery of both the Guangzhou New City and the Pearl River. At the base of the tower display Guangzhou general information, including history, culture, economy and tourist attractions and set up many tourism service facilities; at the top design restaurants, entertainment facilities and viewing platform.

Inside the tower display the city planning model. The Urban Planning Exhibition Hall with a total floor area of not less than 5,000 square meters is designed to display large-scale large city models and other urban construction achievements. What is more, there are also viewing platforms, entertainment and restaurant facilities, with recreational, dining and other services for tourists. At night, the tower glows and emits light rather than being up lit. Every node in the lighting design is individually controllable to allow for animations and color changes across the entire height of the tower. Three laser lamps which can reach as far as 1 kilometers point directly to the top three buildings of Guangzhou City, Zhongxin building, and the twin towers in Zhujiang New City. The aerial mast is controlled by keying circuit, with everyday one color. Local people would know what the day it is once they see the light.

The Waist with a Minimum Diameter of 30 Meters (98 ft)

The external frame is composed of 24 inclined concrete-filled columns, steel horizontal ring beams, and steel diagonals. It was planned to be completed before 2010 for the purpose of transmitting radio and TV signals for the Asia Games. The form, volume and structure are generated by two ellipses, one at foundation level and the other at a horizontal plane at 450 meters (1,476 ft). These two ellipses are rotated relative to another. The tightening caused by the rotation between the two ellipses forms a "waist" and a densification of material. This means that the lattice structure, which at the bottom of the tower is porous and spacious, becomes denser at waist level. The waist itself becomes tight, like a twisted rope; transparency is reduced and views to the outside are limited. Further up the tower the lattice opens again, accentuated here by the tapering of the structural column-tubes. The diameter of its narrow waist only reaches 30 meters.

The Canton Tower has the high-tensile steel as its raw material, with a total weight of only 50,000 tons. The new tower takes special level seismic design, which can make it resist any strong gale and magnitude 8-and-above earthquake.

Six new high-speed elevatorsare available inside the tower, reaching as high as 438 meters, the highest in the world. They only take 1 minute and a half from the bottom to the top. To address the impact of the elevator on the eardrum, the construction units installed an air regulation device in the elevator. This is the first installation of the device in the world.