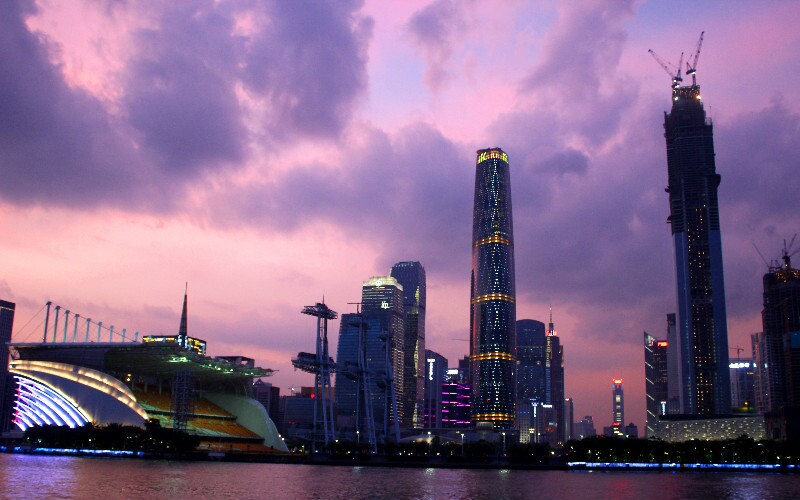 The third longest river in China, the Pearl River, measures 2,129 kilometers (1,323 miles) in length. The Guangzhou section of the river is where Guangzhou's most scenic spots are located. Many famous sights are clustered along the river and are the reasons for many people taking a trip to Guangzhou.

The Pearl River got its name from a huge rock island. When the thousand-meterlong Pearl River cut through Guangzhou City, a large rock island in the centreof the river was scoured over. Over time this became smooth and bright like a pearl, hence the rock being named "Sea Pearl Rock" and the river "Pearl River". An interesting legend offers an alternative explanation of the rivers name. It was said that an Arabian merchant stole the valueless pearl of his country and came to sell it in Guangzhou. Since the pearl was the treasure of his nation, the Arabian State ordered his people to Guangzhou to bring the pearl back. However, on their ship home, the magical pearl suddenly flew up and fell into the river. Later the pearl changed into a huge shining rock. The river was later named as Pearl River.

The river has a long history and nourishes the civilization of south China. Today standing on the banks of the river are star-graded hotels and commercial buildings, White Swan Hotel, Hotel Landmark Canton, Nanfang Mansion, Aiqun Hotel, Guangzhou Hotel, Gitic Riverside Hotel, all like sky-scrappers. In the evening, both banks are lit brightly joined occasionally by the bright moon hanging in the sky. Full of passengers, pleasure boats for the Pearl River cruise travel from the west to the east elegantly on the river, like playing happy melodies all together. The evening cruise on the Pearl River is one of the tourist highlights in Guangzhou. The beauty of the Pearl River at night can be compared with that of Hong Kong's Victoria Park. The cruise section from the White Goose Pool to Guangzhou Bridge is the highlight of the Pearl River cruise. Scenery along this part is so fascinating, with jade-colored water and colored lights on shore.

During your cruise you can enjoy beautiful scenery with such romantic names as "Night Moon over the Goose Pool", "Misty Rain over the Twin Bridge", "Red Heart of the Pearl River", "Autumn Moon over the Pearl River", "Clear Waves on the Pearl River" and many more. To help you understand what you are seeing there is a detailed introduction to the 30-odd historical and cultural sites given on board by speakers, thus enabling you to sample a brief taste of the colorful local culture.