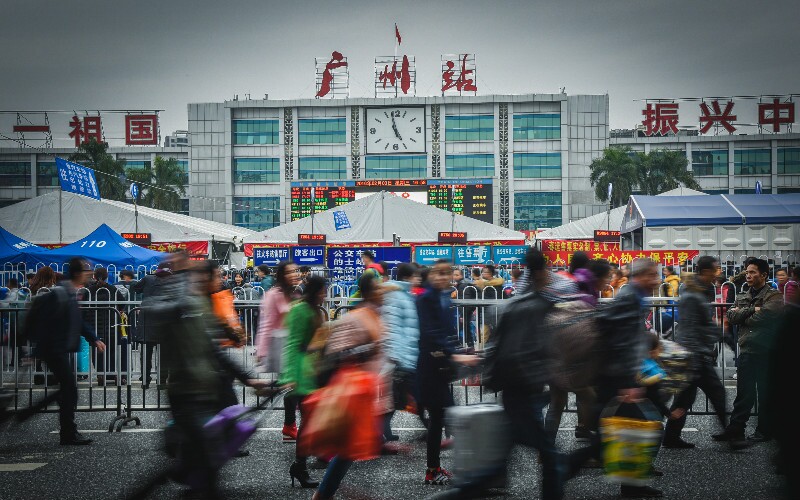 Jingguang (Beijing-Guangzhou) Railway and Jingjiu (Beijing-Hongkong) Railway run through Guangzhou. Guangzhou railway station is situated in the western ring-road. Travelers can get there by buses of No.7, 34, and 225.. It's very convenient. There are trains to the large and medium cities all over the country. Guangzhou Railway Station is in Huanshi Road (环市路), and it is the largest and the most important station in Guangzhou, at present. Trains departing to Beijing, Wuhan, Nanjing, Chengdu, Chongqing, Xi’an, Lhasa and many other cities in China.

Guangzhou North Railway Station in Huadu District (花都区) is a railway station with advanced equipments (ticket vendors, touch information inquiring system, LCD TV, etc) and capacious and comfortable waiting rooms, being 27 kilometers (about 17 miles) from Guangzhou Railway Station. It mainly operates bullet trains from Guangzhou to Changsha, Wuhan. Guangzhou West Railway Station is a cargo terminal in ordinary days. However, it would be used as temporary passenger station during the Spring Festival days. There are through trains running from Hong Kong to Guangzhou. The trains depart from Hong Kong at Hung Hom Railway Station and Guangzhou at the East Station. The journey covers 182 kilometers (113 miles) in around two hours.