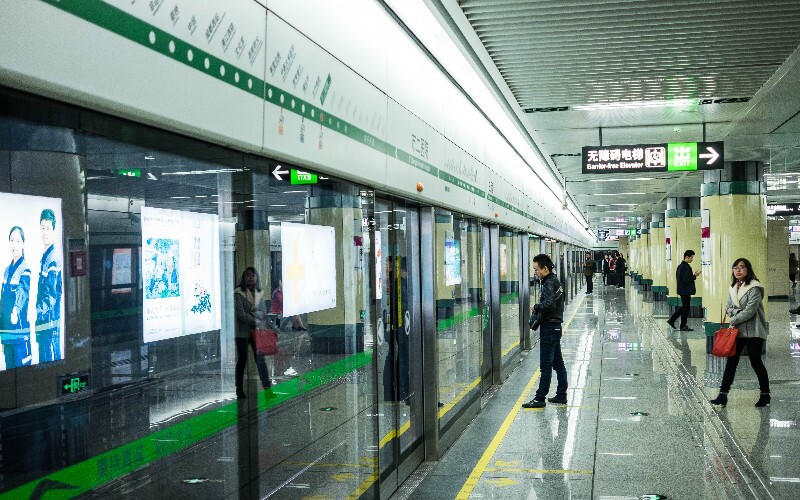 Introduction to Stations on Line 5

Next to Nanhai District, Jiaokou Stop is at the crossing of Fangcun Avenue and ShuangQiao Road, south to the Jiaokou Passenger Depot. It is close to some residence areas including Fangqiaoyuan, Yicaitingyuan, Longwan Square and Rui'an Garden, and educational institutions like Cuizhuyuan Art School of Flower Arrangement, Guangdong Provincial Commercial School and Deming Primary School. Besides the station links Foshan Guanfolukou Passager Station and Guangzhou Jiaokou Bus Station.

Tanwei Station at Mid-shuangqiao Avenue is close to Shuangqiao Park, Shuangqiao Middle School and Haijiaohonglou Natatorium in the east, Jinbandao Hotel in the west (the region is mainly occupied by apartment buildings), a major aquafarm in the northwest, Zhudao Garden in the northeast, Longshengwei in the southwest, and Songzhou Middle School and the local office of China Customs Bond in the southeast.

Xicun Station, at the crossing of the west loop and Xiwan Avenue, is close to Guangzhou Train Station, Provincial and City Bus Station, Liuhua Station, as well as some major shopping malls for clothes and shoes in the east, NO.2 People's Hospital of Liwan District and Guangya Middle School in the south, Xichang, Hepingxincun village, Huanshixilu Primary School and some comprehensive shopping centers in the west, and Tongdewei'ezhangtan, Xiehe Primary School, Xiehe High School and Yangchengxiwan Building in the north.

It is in front of the south gate of Guangzhou Zoo. The station has two entrances, entrance B to Dongdu Dashi Food Street and entrance C to New Oriental Hotel .

Yangji Station is the transfer station for line 1 and line 5. It is located below the crossing of Zhoushan Road 1 and Meidong Road. It is close to some residence areas, newly-developed high living areas and luxurious clubhouses. The traffic is quite convenient. Wuyang around New Town, Tianhe and other recreation areas are concentrated area.

Wuyangcun Station is on the west side of the crossing of Siyouxinma Road and Guangzhou Avenue. It is close to Wuyang New Town Plaza, Jinqiao Building, Meijing building, the New Times Square and Guangzhou Railway First Secondary School in the northwest, Nantian Plaza and high-level commercial and residential areas in the northeast.

Zhujiang New Town Station is located below the crossing of Huaxia Road and Huacheng Avenue. It is near Chinese customs and commodity inspection building.

Tancun Station is located below the crossing of Tianhe Huacheng Avenue and Xingguo Road.It is close to the integrated commercial and residential areas of Zhujian New Town in the northwest and Zhujiang Park in the northeast.

Tancun Station is located south below Guangzhou Racecourse. It is close to Flower City Exhibition Center in the east and Zhujiang Park in the northwest.

Chebeinan Station lies in the crossing of Huangpu Avenue and Chepo Road. It is the transfer station for line 4 and line 5.

Dashadi Station is located in the bustling area of Huangpu District, surrounded by the traditional center of Huangpu district. In the northeast lies Guangzhou 123 Secondary School and 86 Secondary School, in the southeast the police station of Huangpu District, in the west Harbour Primary School, Harbour Village and Golden Kindergarten, in the northwest the Harbour Hospital attached in Guangzhou Medical College and Hengsha Village.

In the north part of Wenchong station sits Wenchong parking-lot and Wenchong Center, in the east Vanke City Garden and petrochemical living area, in the southwest Wenchong Village and Wenchong Primary School, in the northwest Dasha Inn.