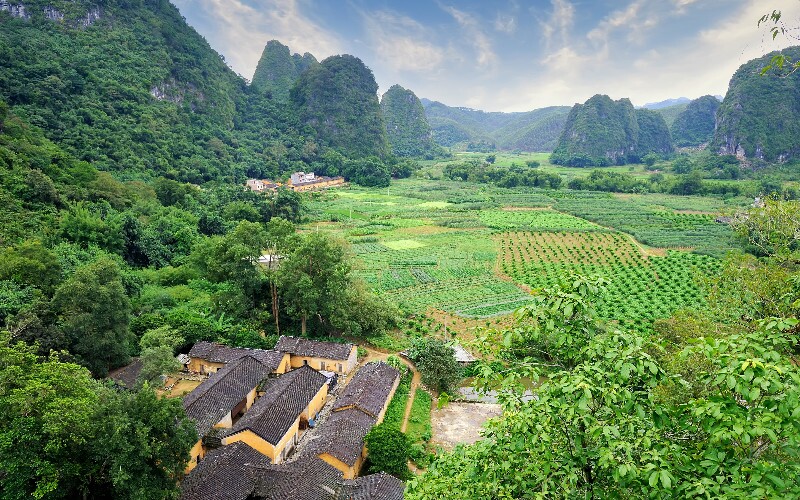 Small by Chinese standards, with an urban population of some 800,000, Guilin would be considered a substantial city in many a nation elsewhere.

However, as with many cities in China, it was considerably smaller not many decades ago.  The product of China's rapid urbanization, for many of Guilin's city dwellers the countryside isn't far behind — and some bring it with them.

The Urbanization of China

China is urbanizing so rapidly and with such a huge population that the movement of people from the countryside to the cities has been called the greatest human migration in history. In just a dozen years, from 1990 to 2012, China's urban population doubled from some 26% of the nation as a whole to over 52%.

This mass-migration has been chaotic.  Some have clearly settled in the urban environment. Others, most notably the migrant workers, are caught between urban life and life in the countryside as they make their holiday commutes from one to the other.  New towns have sprung up but, ill-positioned, remain all but deserted, a haunt for tourists and curiosity-seekers.

Ask young Chinese in the city where they spend their holidays and it's very likely they'll tell you of small villages where their grandparents continue to live on the ancestral farms.

It's unsurprising, then, that in a fast-growing city like Guilin where half or more of the people you pass on the street were born on a farm, the boundaries between city and countryside seem to blur.

In its higgledy-piggledy expansion, the outskirts of Guilin in particular feature 'brown-field' sites, scatterings of half-demolished — sometimes half-built — structures that have been abandoned.  These are sites targeted by the Guilin urban farmer.  A patch of ground need be neglected for only a short time before an urban resident spots it, clears it, adds soil from elsewhere if necessary, digs irrigation ditches and begins to plant.

Some of these makeshift allotments can become quite elaborate, miniature farms with small patches of ground acting as fields in which different produce is grown, perhaps even a makeshift hut erected to serve as a farmhouse into which our urban farmer may retreat in hot weather or when it rains.

It is not only fruit and vegetables that the urban farmers tend.  In all but the most central parts of Guilin — and sometimes even there — you're likely to be awoken of a morning by the pastoral sound of a cock crowing.  Some city-dwellers have sacrificed their balconies to ducks and chickens, make-and-do hen houses guaranteeing a supply of meat and eggs for the household, so many indeed that there's nearly always a chicken within earshot.

Sometimes they escape and wander off. It is not very unusual to see a chicken taking a stroll along a busy pavement past the shops as if setting about its own domestic errands.

Even those householders who don't go to such extremes tend still to prefer their food up-close and personal. Raised on farms as they have been, they're much more likely to buy a duck than duck, and it's far easier to find chickens clucking with their breast intact in the many farm produce markets scattered around the city than it is to find chicken breast clingfilm-wrapped in a supermarket.

Explore the streets around the city's peripheries and seek out your own urban farms.  They're one of the aspects of China in the present day in all its rapid change that makes the nation so fascinating, and Guilin offers a wonderful opportunity to see the reality of blurring boundaries as the country hurls itself, chaotically, piece-by-piece into the modern world.

To see the 'brown field' sites favoured by the urban farmer you'll have to get to the city's edge, but it's an easy bus ride.  Take the 99 or 11 bus from the city centre crossroads, outside the KFC on Zhong Shan Road.Get off at Wa Yao Kou bus stop, cross over the vibrant, (and noisy), corner , (worth lingering a while to see people playing musical instruments, presenting singing performances, having their hair cut, their torsos hot-cupped and all manner of unusual outdoor activities), back to Zhong Shan Lu and cross the road.  Walk up a hundred metres or so to the entrance to the Wa Yao farm products market down the street with the busy entrance.

From there, to see the urban farm in our picture, head back down Zhong Shan Road and cross it to get to the petrol station on Tong Xin Road, (some 500 metres back from the Wa Yao market).  Walk down Tong Xin Road and the urban farm is on your left.  It's overlooked by a characteristic duck-and-chicken-run balcony.  You may not see the birds unless they're jumping up and down, but you will hear them.

To round off your walk, Tong Xin Road ends on a particularly attractive stretch of the Li River. Turn right or left when you get there, or do both; either direction makes for a rewarding stroll.

If you want an offbeat guided tour of more than just the tourist sights, let us know when booking a Guilin tour. To have us design your own unique Guilin tour simply fill in our tailor-made form with what you want.