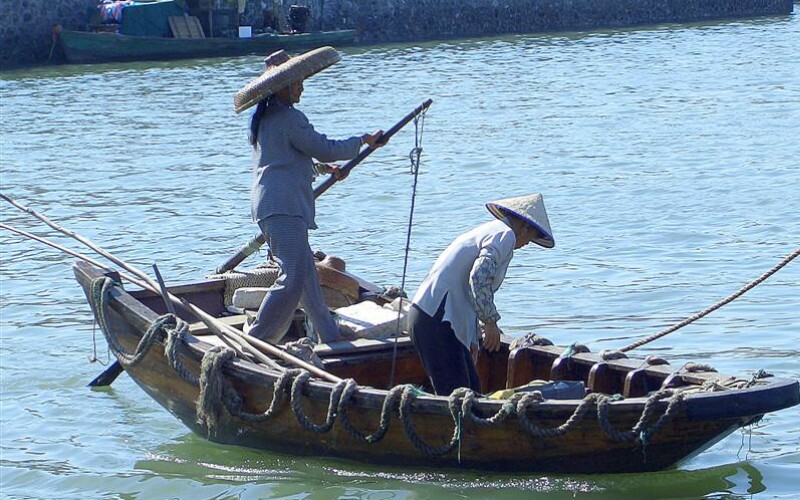 Head outside Guilin City proper, walk the banks of the Li River, and you will see plenty of evidence of the close ties the local community has always had with this scenic waterway. Aside from its beauty, the river has brought practical benefit to the people of the area for millennia. Traces of these traditional ways may still be found within the city's boundaries, nestled up to the river's banks, with small floating villages of boat people who continue to live off the water in makeshift shanty craft.

One such village is to be found near Guilin's popular Nanxishan Park, if you know where to look. China Highlights will show you where, and even take you there.

The Li River has always been important for the livelihood of the people in and around Guilin. Where today tourists take the pleasure boats to Yangshuo, admiring the beautiful scenery along the way, in former days fishermen and farmers would take their produce to market in neighboring villages using bamboo rafts and other small craft. The water in which the modern citizenry swims beneath the Liberation Bridge was once taken by large and ingenious waterwheels and fed into water courses for the irrigation of crops.

Things may have changed, but the traditional ways have adapted even to modern times. While the cormorants once used for fishing are most likely to be seen by tourists as they are offered up for scenic photographs held aloft on bamboo poles, the birds are still used for fishing in the traditional manner. In the center itself, when the river is low, you can still see people wading in the water as the look for snails, shrimp and small fish as their ancestors have done for dozens of generations.

Perhaps the best way to see the mix of the old and the new, the traditional and the modern, is to pay a visit to one of Guilin's boat villages. These casual amalgamations of makeshift boats are fascinating for their ingenuity as well as the traditions they help preserve.

No doubt you've seen many pictures of the bamboo rafts that are one of Guilin's many trademark attractions. If you are here now or have visited Guilin before, then you've probably even traveled on one in some scenic location. But have you seen the modern version, made with plastic drainpipes instead of bamboo? Though most of the rafts in the boat villages are made of bamboo to this day, the occasional drainpipe raft the tradition has inspired typify the ingenuity of the floating villages' inhabitants.

Their make-and-do mastery of impromptu ideas doesn't stop there. The houseboats themselves are often made from the discarded remnants of the city around them. An abandoned front door made for a residence on a city street finds itself set in a higgledy-piggledy arrangement of a wall made of old planks. A plastic sheet makes a roof over a porch, itself made comfortable with a discarded park bench.

All The Comforts of Home

It sounds primitive, even undesirable, but look again — some of these boats are a dozen metres long, several metres wide, with windows making up most of their walls. Peek inside and you'll see separate rooms – kitchens, bedrooms, lounges. Look on the roof for a satellite dish for the television. What effort has not been wasted on exterior cosmetics has been well-spent on interior design with an eye to convenience and comfort.

More often than not, domestic animals get their own houseboats. Dogs get a comfortable kennel to themselves, while chickens roost lulled by the rocking of their floating coops. Aquatic birds — cormorants and ducks — wander and swim free, but always to return, tethered by the lure of the food their owners provide.

A visit to such an impromptu river village finds the observer in a quaint world of tradition made modern in its materials, but much the same in so many ways as it has been for thousands of years.

See a Floating Village for yourself

There's one not far from the city center. Catch a 99 or 11 bus from the city center in the direction of the railway station. Two stops after, get off at the Nanxishan Park stop, walk back on yourself and follow the path around the park to the river where it meets it at the art gallery. Turn left down the river, and the village starts beyond the mooring for the pleasure cruisers. Better still, why not...

Our Guilin tours are fully customizable. Have a look through our pages and find what interests you from our many articles on destinations and activities in and around Guilin. Make a list of your ideal destinations, submit it to us, and we’ll suggest a suitable itinerary and quote you a price.