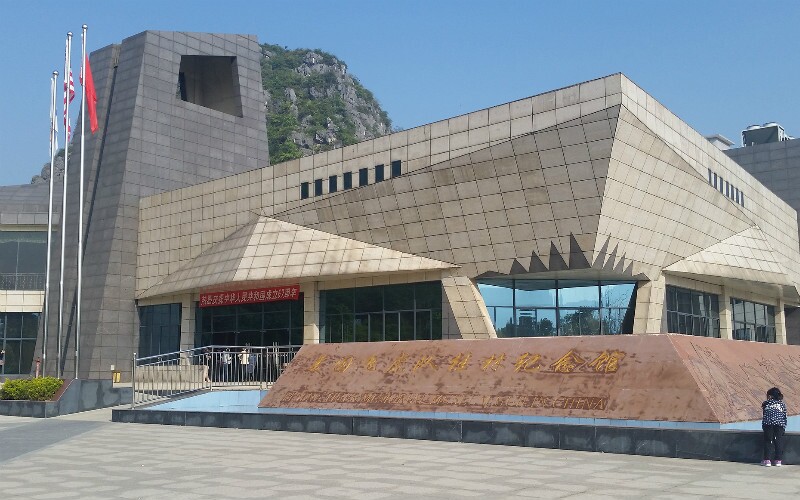 At the height of the Pacific War, Guilin was to host one of its more unusual alliances with the arrival of a squadron of American pilots at Yangtang Airport in December, 1943. The Flying Tigers were highly successful in combat, bringing down almost 300 Japanese aircraft with a loss to themselves of only 73. A Heritage Museum has now opened on the site to commemorate this unusual and little-known alliance.

Under the command of General Chennault, the Flying Tigers had already seen combat over China in its defense from their base in Burma. When Burma itself was overrun by the Japanese, Chennault and his men redeployed to Yangtang Airport in Guilin. Yangtang Airport had been in existence since 1933 as a military base, requiring the conscription of rural labor in its construction. With little in the way of mechanization, rocks had to be carried for the runway which were then crushed beneath huge rollers pulled by the laborers.

Guilin's limestone peaks offered the airport some protection, but the Flying Tigers set up their headquarters in a natural cave overlooking the base as the best protection from air attack.

In the fog of war, with the residents in the combat area often unaware of the presence of the Americans, the crews were issued with 'blood chits' explaining their presence and requesting that any pilot recovered be provided with assistance as an ally.

The tigers' faces painted on the noses of the aircraft, in particular their bared teeth, were to prove a lasting symbol for the Flying Tigers, a motif that has now been built into the design of the main building of the Heritage Park itself. Relief mural from the museum

Central to the park is a museum featuring relief murals depicting scenes from wartime Yangtang Airport in a broad entrance hall topped by a glass dome. Side rooms offer displays of memorabilia from the period, including military uniforms, badges, blood chits, and even the cameras used by the squadron, providing an interesting overview of the period and the lives lived by the men stationed there.

The cave used as the headquarters for the men overlooks the museum, and may also be visited.

From Guilin's main railway station, from the stop on the station side, take a number 88 bus to the Jinshan Square stop. Walk up to the square and turn right, catching a 61 bus from near the corner to Taian Road. Continue walking down that road for a further 500 meters, and the Heritage Park is on your right.

Alternatively, why not consider contacting us for a Guilin tour? All our tours are adaptable, and we would be happy to tailor-mFake your own to incorporate the Guilin Flying Tigers Heritage Park along with any other sites you would care to add to your itinerary.

China Highlights sponsored the visit of two veterans to the site in 2008, and you can see a video of their visit. They were amongst many VIPS, including President Bill Clinton, who have made use of China Highlights in their travels to China. The Ling Canal has its own small Flying Tigers museum at the crash site of one of the aircraft they lost in combat.