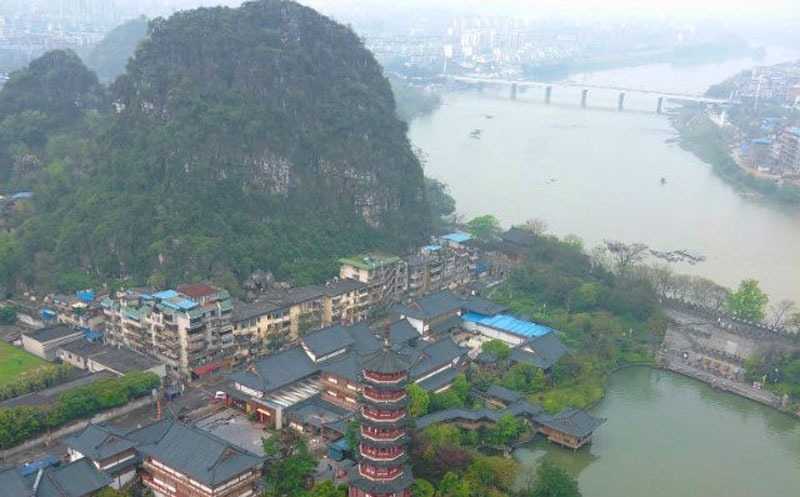 Folded Brocade Hill (Diecai Shan) is one of Guilin City’s most famous and frequented parks. It offers a short steep climb on stone steps, various pavilions, fantastic views of the city and surrounding mountains, ancient inscriptions and a cave that goes all the way through the mountain.

Towering over the Li River's west bank, Folded Brocade Hill lies in the north-central part of Guilin City. The hill’s name is derived from its queer-looking rocks which are horizontally fissured. The Chinese name Diecai Hill actually means Folded Colors Hill. However, diecai was used in famous Tang Dynasty (618-907) poetry to mean folded layers of colored silk brocade, and this is what came to mind when someone first named the hill. Folded Brocade Hill has four peaks: Yuyue Peak, Siwang (Look-In-All-Directions) Peak, Crane Peak and Ming Yue (Bright Moon) Peak.

Get an bird's eye view on the top of Folded Brocade Hill.

Halfway up there is a cave called Wind Cave, which runs through the hill. The cave is calabash or bottle gourd-shaped, with two wider mouths one side of the hill and a narrow passage, which only allows one person to pass through at a time, on the other side of the hill. A cool breeze blows inside all year around, which gave it the name Wind Cave. Inside the cave are 90 Buddha sculptures of the Tang and Song (960-1279) dynasties, as well as dozens of ancient stone inscriptions from these and subsequent dynasties.