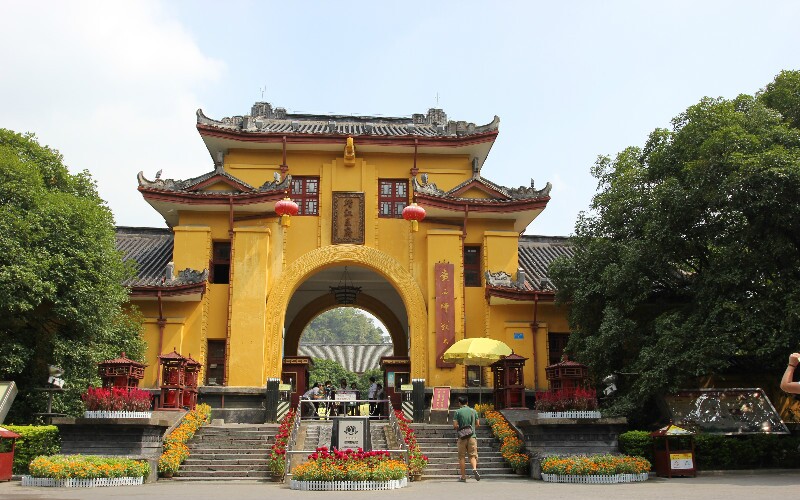 The Mausoleums of Jing Jiang

The Jing Jiang Mausoleums are tombs of generations of Ming Dynasty (1368–1644) princes who were dispatched by the emperor to govern Guilin Prefecture.

Highlights of the Jing jiang Tombs

The mausoleums are set amidst lush pine trees and surrounded by hills. A babbling stream runs gently through them. All of this indicates good fengshui, which also decided where the Ming Tombs in Beijing were located.

The site was circled by an oblong-shaped wall, which divides the complex into the outer garden and the inner palace. Over 300 tombs scatter around the 4-hectare (10-acre) site.

A sacred way in the outer garden leads to the inner palace. Along the way lines stone statues of animals and government officials, which were believed to guard the tombs.

In the inner palace lay the tombs themselves. The Mausoleum of Princes Zhuangjian is the only one open to the public. Some valuable relics excavated from his tomb, including a vase and some silver and gold articles, are now displayed in the Altar Palace.

Jingjiang Mausoleum Museum was built in 1987, dedicated to exhibiting mortuary objects unearthed from the mausoleums, including over 300 pieces of porcelain, gold, and silver ware, jade articles, and swords. These mortuary objects give an insight into the luxurious life of the Jingjiang princes and the funeral system of the Ming Dynasty.

Over 50 stone tablets with inscriptions were unearthed from the Jingjiang Tombs, which are of important historical and aesthetic value, owing to their reliable records and delicate calligraphy.