Top Free Things to Do in Guilin 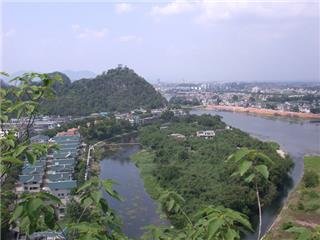 A bird's-eye view of Guilin

A popular tourist destination, it's no surprise that seeing Guilin's better-known sights can become a little expensive with park entrance running as high as RMB75 per person. Luckily, very little of what makes Guilin such a fantastic city to visit is fenced off with gate-guards and entry fees.

Perhaps the best Guilin experience is to be found away from the tourist crowds and, what's more, the experience is free! China Highlights can't tell you all there is to see, but in our pages you can find some new and interesting areas to explore. Here we'll tell you how to explore Guilin for yourself and make your experience unique as you set out in search of the Guilin few others see.

Guilin has one of the more beautiful city centers in the world. A hundred meters away from the main Zhongshan Road and the bustle of traffic is left behind. Many visit the central lakes, but few visitors realize how extensive Guilin's water system really is. 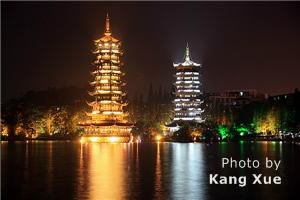 Shan Hu (Pine Lake), with its Sun and Moon towers and Ronghu, (Banyan Lake), with its Glass Bridge and central island are well-known and well-frequented. Both are worth an evening visit, Pine Lake for the brilliant lighting of its towers reflecting upon the water and Banyan Lake for its musical fountain display.

Both – in keeping with much of the extensive water system – feature greenery made anything but green of an evening, lit with variegated lights. The effect may sound garish, but it's accomplished with surprising subtlety presenting an evening ambiance of elvish mischief and mystery.

Getting to the central lakes is easy — a pleasant walk from crossroads at the city center some 500 meters south down the Zhongshan Road.

Beyond the Central Lakes 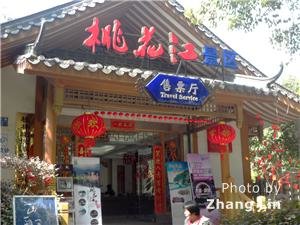 Having toured the well-known central lakes of Guilin, keep walking. To give just a few examples of what you can see, continue along the northern side of Banyan Lake and you'll (eventually) come to a massive lock, a part of the city center water system's defenses against those vagaries of the weather that see the Li River rise and fall so spectacularly, maintaining an even water level all year round.

At the end of the lake it becomes the Taohua Jiang (Peachblossom River), which winds off for miles through the city and out into open countryside. The southern side of the lake will take you along another river which winds around to just north of Guilin's main coach station before bending back around to meet the lesser western side of the Li River where it flows around the large island whose north-eastern tip is the famous Elephant Trunk Hill.

The theme of our article is exploration, and China Highlights cannot guide you through all the twists and turns of the miles and miles of watercourses which originate with the central lakes. Arm yourself with a map and explore them for yourself. You'll find them so extensive and so varied as to be inexhaustible. Follow your own path and make Guilin's watercourses your own unique and personal experience.

Guilin doesn't much care for the glitz and glamor of some other Chinese cities. There are patches of neon and several city center buildings that top five stories, but on the whole it's a relaxing city reliant upon its charm more than its boastfulness in seducing the visitor. This charm is nowhere better felt than in Guilin's many back streets, undeveloped, homely, occasionally ancient and often unexpected in the delights they have to offer.

Where Do I Start? 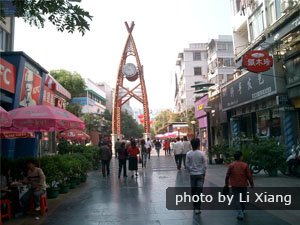 Wherever you're standing. Duck down the nearest unpromising side alley and see where it leads. You may be disappointed — if so, try again. Often these small lanes can lead to a bewildering maze of small streets and side-turnings on which the locals sit in the sun and play chess or cards on makeshift tables.

You may stumble upon an old well here, a thriving market unexpectedly opening out there, old buildings, curious small shops, small lakes in the middle of nowhere, large and imposing trees squashed into unfeasibly small spaces. There's a vibrancy to these streets that is singularly Chinese.

With China changing so rapidly, many tourists want to know 'Where is the real China?' Well, this is it. In Guilin's back streets you've found it.

Guilin's bizarre karst peaks are what gives it its unique charm and, in exploring the back streets, it's interesting to see what the locals have made of them through the years when they're not fenced off and made pristine for tourists.

If you see a hill along a back-alley, head for it. There are often doorways or small building facades built into them where a limestone cavern has been used for a home or a workshop. Small paths may lead you along the lower reaches of some of the hills and, if you're lucky, to the top – but be wary here. These are unlikely to be paved and railed so tread carefully. 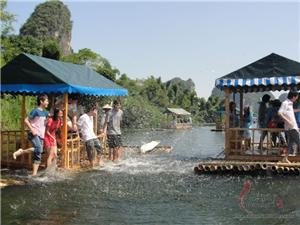 Even well within reach of the center there are unvisited and delightful stretches of the Li River's banks to be explored. One such is over the river from Elephant Trunk Hill. Here, next to a small village which remains untouched by the development of the city all around it, fishermen and others who ply their trade upon the river pull up their bamboo rafts. This beautiful, secluded area so close to the city center is not alone.

The river rewards exploration as it flows through the city. Look around and discover it for yourself.

Few aspects of China are more enchanting for the foreign visitor than the unrestrained pleasure the Chinese people take in gathering in the open air to practice their dancing, their singing, to form small musical groups with the playing of traditional instruments or simply to sit and watch the world pass by.

These areas are especially to be sought out, and one such lies at Wa Yao Kou. From the railway station, take a 99 or an 11 bus to the stop and you're there, a bustling, noisy gathering of people with everyone setting up stall there from barbers through ear dewaxers to those who place hot cups on the bared torsos of those who believe it brings them some medical benefit.

Should you find such a bustling place in your explorations, be wary; the citizenry do not regard themselves as a spectacle, and foreigners, though welcome, are less welcome if taking too many photographs.

3. Take a City Bus to the End of the Line 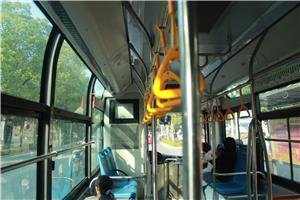 The karst hill formations are extensive and go out way beyond Guilin's city limits. So too do the rivers and waterways. The scenery at its best is often found beyond the concrete of the city and out in the small villages and areas of farmland that surround it. Best of all, these places are surprisingly accessible through Guilin's urban public bus system.

The rickety number 4 bus starts over the road from Guilin's railway station heading south. As a foreigner you will be asked to get off before the end of the line, terminating as it does in a military establishment, but by now you're well out into the countryside and can explore.

You can walk the tree-lined river here and, if you're lucky, see a fisherman out with his cormorant. (Yes, they really do use them even today, it is not a myth invented for tourists.) Follow the river to the left in relation to the direction taken by the bus and you will find it flows down to a rural, unspoiled and unvisited part the Li River.

Again the bus originates at the railway station and heads south, but this time the road followed is the one which makes its way to Yangshuo. Along this road you can find some of the more pristine scenery surrounding Guilin. Get off at the end of the line – the Guilin Tourism University campus – and explore your surroundings from there.

From Guilin Railway Station catch the number 10 bus to the end of its route, (Guilin's University of Electronic Technology), and from there the number 13 further down the same road. This terminates at the Guilin University of Electronic Technology's new campus. The campus itself is an unexpected new development in the middle of next-to-nowhere and it's this you will relish exploring. Ask for directions to the nearby river and walk it, taking side-trips into some of the many villages along its banks or up into the nearby hills.

Pick a number, any number...

… and see where the bus takes you on a map. Many of Guilin's urban routes terminate in the beautiful rural areas surrounding Guilin. Pick one and have yourself an adventure. For further suggestions on how best to choose, see the conclusion at the end of this article.

Even if you're on a budget, don't discount entry into Guilin's parks altogether. There are ways to see them for free without breaking any rules or risking your trousers on barbed wire. 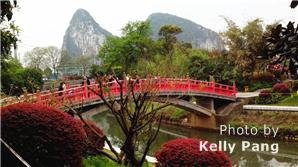 One of the stranger aspects of Chinese tourist areas is the unguarded back gate. Some of Guilin's parks, at least, are no exception. Ignore the prestigious front entrance and the ticket booth; walk around the park. You may get lucky and if not you'll still find something worthy of exploration in Guilin's back-alleys as detailed above.

One example is Nanxi Park, two stops south of the railway station on a 99 or an 11 bus. Ignore the main entrance and walk to the road around the back of the main hill. Either walk over the hill using one of the paths up it or walk around the hill completely to the unguarded entrance at the rear of the park.

Get to most of Guilin's parks at around 7.30 in the morning and you're sure to find the front entrance open with no one to take your money. As with the back entrances, no one seems to mind the fact you can do this, so it's worth taking advantage of the opportunity.

Conclusion (and a few hints) 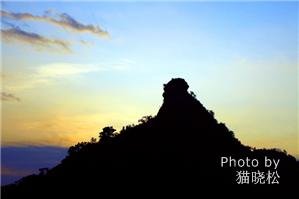 There are many beautiful places around Guilin, you can find one when you move a step. This is the beautiful scenery of Laoren Hill, Old Man Hill.

The lure of Guilin is its scenic beauty and, unlike other cities you may visit for their history, their culture, their art galleries or their museums, Guilin's appeal is all around you in the hills and waterways, the Li River and the back-street life of its citizenry. Ignore the tourist spots and explore these and you will create for yourself your own entirely unique experience of Guilin.

Google maps is of value here. Look around Guilin in its satellite view and seek out places in or near the city that look interesting, then find a bus that can take you there or, better still, if it's close enough, just walk. You'll find plenty to see along the way. Check out some of the far-flung bus stops on the map. If they look to be in interesting areas, plot out a route for yourself.

And don't forget China Highlights. We specialize in tailor-made tours and we're based in Guilin. Let us know what you would like to see more of and we can provide suggestions, guide, and transport to get you there.

Our Guilin pages are here for you to give you hints and suggestions for places to go, both known and unvisited, for an unusual and fascinating visit to Guilin. 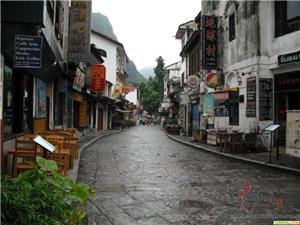 6 Free Things to do in Yangshuo 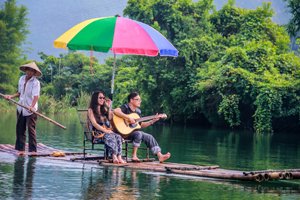 How to Plan a Guilin Tour — Everything You Need to Know 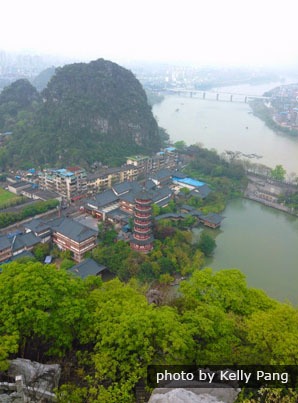 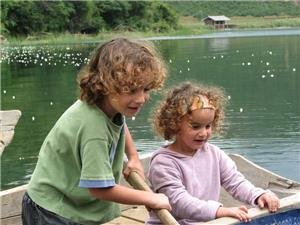