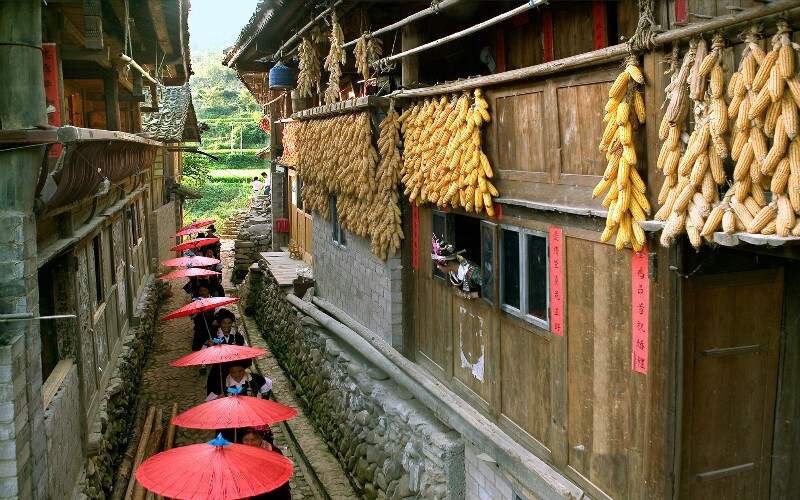 Top 10 Facts You Should Know Before Traveling to Guizhou

Guizhou is a mountainous province located in the southwest of the People's Republic of China. It is not a familiar name, for Guizhou is not a popular destination for overseas travelers, so you may not realize that it is the ideal summer resort with mountainous landscape, and a cultural hub for ethnic minority groups.

With improvements in transportation over recent years, tourism in Guizhou is growing fast. Here are 10 facts you should know if you are interested in Guizhou. You may find they give rise to some ideas for planning a trip there.

1. Guizhou Is One of the Birthplaces of Ancient Humanity

As early as 240,000 years ago, people lived and flourished in Guizhou. There are many ancient human fossils and over 80 ancient cultural sites in the province. The Paleolithic cultural site at Guanyin Cave is now officially named “Guanyin Cave Culture”.

2. Guizhou Is the Only Chinese Province Without Plains

Guizhou is a mountainous region

Guizhou is in a mountainous region with an average elevation of about 1,100 meters. 92.5% of the land is covered by mountains and hills. Guizhou is the only province in China without plains.

Its special topographical features have forged magnificent scenery, like Huangguoshu Waterfall and Fanjing Mountain. Some traditional ethnic minority villages are scattered on the continuous mountains. Wearing a good pair of shoes will help you to travel around Guizhou.

3. Guizhou Is an Ideal Summer Resort

The climate in Guizhou is warm and humid. In the capital city Guiyang, the average annual temperature is about 15°C (59°F), and the summer temperatures are around 22–25°C (72–77°F). Its pleasantly cool climate makes Guizhou an ideal summer resort.

Although the average temperature does not change much, the weather will be cooler in early morning and after nightfall, or when you are in rural areas. You are recommended to prepare some long-sleeved clothes even if you are traveling in summer.

4. Guizhou Has Plenty of Rainfall

Besides flat ground, another rare thing in Guizhou is sunny weather. The annual rainfall in the province is around 1,100–1,300 mm, with about half the year being rainy season. The annual sunshine in Guizhou is more than one third less than in eastern parts of China at the same latitude.

You’ll need an umbrella in Guizhou, no matter when you go.

Check the weather in Guizhou.

5. Guizhou is a Cultural Hub for Ethnic Minority Groups

At present, there are 49 ethnic minority groups living in Guizhou. Minority people account for 39% of the province's total population.

Traveling in the villages, you will have a chance to experience local customs and admire folk art, like the wine culture, festivals, singing and dancing, and beautiful costumes.

Experiencing local handicrafts can be a highlight. In some villages near Kaili you will have a chance to learn batik, papermaking and silversmithing, and to create your own works of art.

These customs and arts are disappearing, however, for young people nowadays tend to leave their villages for school and work, instead of learning traditional customs. You are recommended to pay a visit here as soon as possible.

See the most interesting minority villages in Guizhou.

6. Guizhou Is the Home of Festivals

There are hundreds of festivals celebrated in Guizhou minority villages every year. During the festivals, minority people dress up in their finery, prepare their best food and wine, and sing and dance together. Some festivals are celebrated to honor ancestors, to pray for harvest, or for young people to seek their partners.

In Guizhou, you are always welcome to join in the festival celebrations. If you don’t mind the weather, traveling around during the first lunar month (late January to February) would be a good idea, as most local festivals take place during this period.

Find a local festival to experience.

7. Guizhou Is the Kingdom of Rice Wine

Guizhou minority people are fond of drinking and skilled in making wine. Guizhou Maotai is perhaps the most famous wine in China and is served at national banquets. For local people, wine is not only a beverage, but a symbol of their customs, culture and history.

You will experience local wine culture right before you enter a minority village, for villagers will prepare homemade rice wine and block the way, and you have to drink to pass through the blockade. Some villages may set 1 to 3 blockades, but some larger villages set 12 blockades, which could be a challenge even for wine-lovers.

This dietary preference arises from the cool, moist climate. People have to cook strong-flavored food to dispel the dampness. Over the centuries, local people have created hundreds of mouth-watering dishes. If you like spicy and sour food, don’t miss the popular local dishes.

Land-locked by mountains and hills, it used to be hard to travel to or around Guizhou. Things have changed rapidly during the past decade, however, and the transportation system has developed very quickly in Guizhou.

Today, Guizhou has one international airport and several branch airports connecting important cities in China and the surrounding countries.

Moreover, as trains are available in every city, travel by bullet train or high-speed train can be a fast and comfortable option. At the same time, express highways stretch in all directions, connecting all the famous attractions and minority villages.

10. Guizhou Is a New Center of High-Tech Industry

In the past, Guizhou always left the impression of being undeveloped. Today, however, Guizhou is a rising star of high-technology industry.

In September, 2016, the Five-Hundred-Meter Aperture Spherical Radio Telescope was completed in Guizhou, the largest single-aperture radio telescope in the world. In recent years, world-famous enterprises, like Oracle, Google, Intel, Microsoft and Apple, have set up big data-centers in the province.

Admire the scenery, experience ethnic customs, and feel the change. Guizhou will be an impressive place for travelers. Here are some sample itineraries:

Or simply send us your requirements, and we can help you create your own trip.