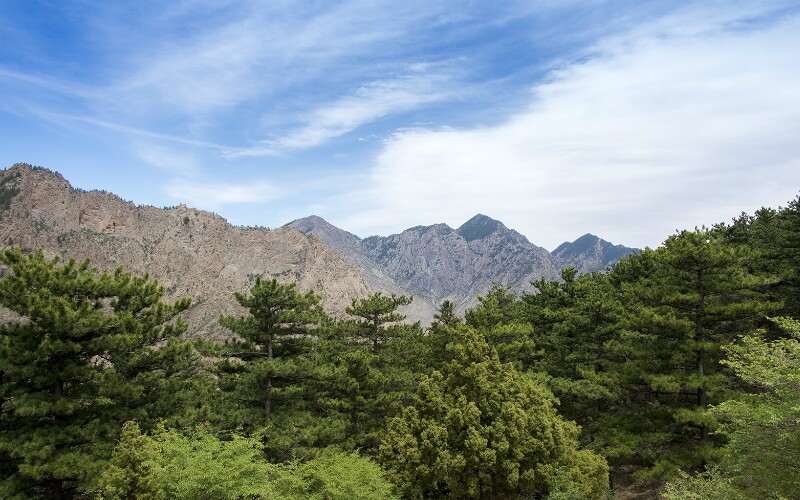 The grotto of Xumi Mountain has 162 caverns. It is the biggest grotto group in the area. 70 grottoes have carvings, color paintings, frescoes and inscriptions carved on stone tablets from many dynasties. They have over 350 statues, 12 inscriptions carved in Chinese and Tibetan, 3 tablets, and 11 remnant tablets. The most delicate statue is in the large temple grotto carved in the North Zhou, Sui and Tang dynasties. In the area are the big Buddha building, Offspring Palace, Yuanguang Temple, Xiangguo Temple, Peach Blossom Cave, Pinaster Land, Sange Yao and Blackstone Channel.

No. 45 and No. 46 grottoes have the largest number of statues in Xumi Mountain. 40 statues are bigger than the size of people. Though the No. 51 grotto was broken by an earthquake, it can be seen with its atria, main chamber and left and right side rooms. The main chamber is 26 meters wide, more than 12 meters deep and over 12 meters high. The statue of Buddha is 7 meters high. A tall square column in the main chamber unveils Buddhist images on four sides. In the niche, there is one Buddha and two Bodhisattvas. An oblong altar was carved inside, on top of which sit three Buddhas side by side. Each of them are 6 meters tall.

Passing the Big Buddha Building, you can visit the Offspring Palace which has most of the grottoes of the North Wei Dynasty. The No.14 grotto on the fore side of the cliff is the earliest carved grotto with both statues and paintings of Buddha inside in primitively simple color. The Buddha idols share the same style with those in Yungang and Dunhuang grottoes. No. 24 and No. 32 grottoes were carved a little bit later than the No. 14 grotto. Therefore, there is one Buddha and two Bodhisattvas inside. These are masterpieces made after the period of the Xiaowen Emperor, judging from the statues' faces.

As for the No. 45 and No. 46 grottoes behind Yuanguang Temple and the No. 51, No. 67 and No. 70 grottoes behind Xiangguo Temple, each of them has over 40 statues of Buddha that are 6 or 7 meters tall. In the niche, the statues are mostly one Buddha and two Bodhisattvas, which are carefully carved. What's more, there are various little statues of Buddha on top of the niche, and on the base stand a lot of musicians holding various musical instruments. On the top of the grotto, thousands of embossments are around the tower column.

Unlike most grottoes in China, which were carved in only one cliff, the Xumi Grottoes were carved into eight stone mountains separated by small ravines. The ravines are spanned by ladders and bridges so that travelers can have access to the grottoes.

Xumi Mountain has a beautiful landscape of hills, dense woods and flowing brooks. It is an unusual scenic spot on the loess plateau in northwest China. Walking around the area may take half a day. There are reddish stone cliffs and pine trees.

The grotto of Xumi Mountain is a Buddhist temple. As one of the ten ancient grottoes in China, it is an important heritage site under state protection. It was first built during the North Wei Dynasty (386-534), and it was renovated and enlarged during later dynasties such as the West Wei (535-557), the North Zhou (557-581), the Sui (581-618 ) and the Tang (618-907). It became the largest temple site in the Guyuan region. In 1982, the State Council announced that it as an important heritage site under state protection. In 2003, it was appraised as an AA–rated scenic spot by the Autonomous Region Tourism Administration.

55 kilometers from Guyuan in the northwest; on the peak of a mountain in the north of Sikouzi river (the ancient name is Stonegate River).

The site is about 50 kilometers northwest of Guyuan. To reach the site from Guyuan, you can take a public bus to the small town of Sanying near it (about 6 RMB per ticket), and then take another bus from there to Xumi Mountain (about 5 RMB per ticket). The whole trip, if you go by bus, may cost less than a dollar and fifty cents and take about an hour or more.

guyuan Guyuan Travel Guide - How to Plan a Guyuan Tour